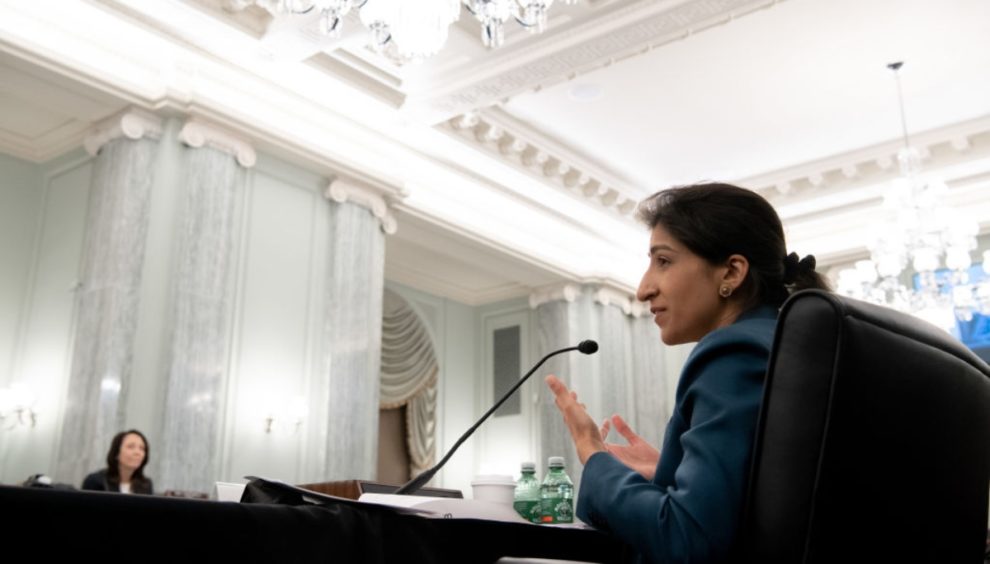 Progressive advocacy groups that have spent the past several months urging President Joe Biden to step up antitrust enforcement, particularly with Big Tech, applauded the U.S. Senate’s Tuesday confirmation of Lina Khan to serve on the Federal Trade Commission.

After senators’ 69-28 bipartisan vote—which included all Democrats present—in support of the 32-year-old “antitrust trailblazer,” the White House said that Biden has named Khan as the FTC’s chair. The president announced his nomination of the Columbia Law School associate professor in March, winning widespread praise from opponents of corporate consolidation.

The groups and individuals who, since the March announcement, have pushed for Khan’s confirmation celebrated what they hope is the beginning of a new era for the regulatory agency—and beyond, including at the Federal Communications Commission and U.S. Department of Justice.

I’m so grateful to the Senate for my confirmation. Congress created the FTC to safeguard fair competition and protect consumers, workers, and honest businesses from unfair & deceptive practices. I look forward to upholding this mission with vigor and serving the American public.

“Lina Khan has proven herself as one of the fiercest and most effective critics of Big Tech,” said Demand Progress executive director David Segal. “She not only understands the threat these monopolies impose, but how to utilize the tools of government to hold them accountable and break them up.”

“We need strong champions like Lina throughout the government—most notably at the FTC, FCC, and DOJ—and hope this is a sign that the administration will move to fill these other key roles in a timely manner,” he added. “We look forward to working alongside her to hold Big Tech accountable, and we encourage the Biden administration to swiftly fill out the commission with a strong fifth commissioner, so that the FTC can fully wield its power.”

The development was also welcomed by Sen. Elizabeth Warren (D-Mass.), who voted for Khan, and Zephyr Teachout, an antitrust expert and Fordham University associate professor of law.

The Biden administration’s designation of @linamkhan as Chair of the Federal Trade Commission is tremendous news. Lina brings deep knowledge and expertise to this role and will be a fearless champion for consumers. https://t.co/5D0LUQZrtN

Alex Harman, competition policy advocate for Public Citizen said that “the overwhelming bipartisan vote for Lina Khan speaks both to her qualifications that made her the ideal nominee to serve on the FTC and the recognition by both parties that concentrated corporate power is a crisis that needs to be urgently addressed.”

“As a commissioner, Khan will take on corporate barons in Silicon Valley and throughout our economy,” Harman predicted. “Greedy and abusive corporations should be on notice that the FTC will no longer look the other way as they amass power to hurt consumers, treat competitors unfairly, and take advantage of workers.”

The advocate applauded Biden and the Senate for “recognizing the urgent need to address runaway corporate power” and said Public Citizen looks forward to “seeing a similar approach to filling the other antitrust vacancies with like-minded progressive leaders who will stand up to corporate abusers.”

“Her presence on the FTC marks the beginning of the end of an era of lawlessness for powerful corporations that they’ve enjoyed at the expense of workers, smaller businesses, and democracy,” Miller added.

Highlighting that support for Khan goes beyond advocates of breaking up tech giants, Family Farm Action recently led a coalition of 33 groups in sending a letter (pdf) to the Senate Committee on Commerce, Science, and Transportation in support of Khan, whom they described as “a leading scholar and voice in antitrust with a bold legal and policy vision for protecting farmers and ranchers, workers, small farms and businesses, and bolstering an economy where all have a right to share in the prosperity they help build.”

Family Farm Action president and CEO Joe Maxwell was among those celebrating her confirmation on Tuesday.

“Establishing fair market opportunities in the food system will require a strong leader with knowledge and experience in antitrust work, and Ms. Khan’s proven skills and priorities position her as an ideal candidate,” he said. “Family Farm Action looks forward to working alongside Ms. Khan to dismantle concentrated power in agriculture and realize a more just, equitable food system.”

Big Tech must explain its algorithms or face a fine in the EU: European Commission