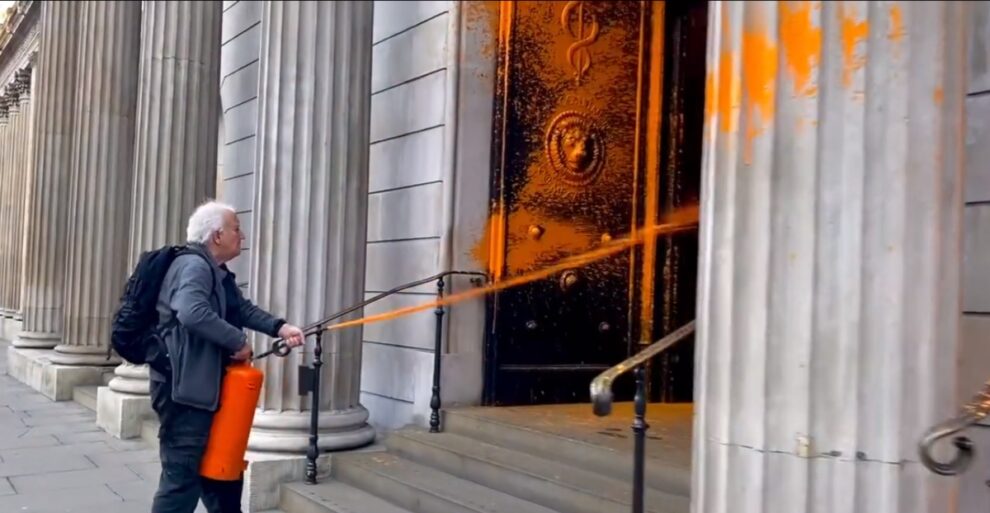 Four were held after paint was sprayed on the interior ministry, the headquarters of the domestic intelligence agency MI5 and a subsidiary of Rupert Murdoch’s US media conglomerate News Corp, the Metropolitan Police said.

Officers from the City of London force arrested two others following a similar protest at the Bank of England in the capital’s financial district.

The Just Stop Oil group, which wants an end to new North Sea oil and gas exploration, said it was responsible and posted video on its Twitter account.

The activists said the buildings were chosen “to represent the pillars that support and maintain the power of the fossil fuel economy — government, security, finance and media“.

News Corp UK and Ireland Limited, the subsidiary of News Corp that was targeted, publishes titles that include newspapers The Times, The Sunday Times and The Sun.

Its London headquarters, opposite The Shard tower, was targeted by Extinction Rebellion climate change protesters in July.

Just Stop Oil has over the last month mounted almost daily protests in opposition to the government’s plans to licence more than 100 new oil and gas projects by 2025.

Action has included smearing chocolate cake on a waxwork figure of King Charles III at the Madame Tussauds museum and throwing tomato soup at Vincent van Gogh’s “Sunflowers” at the National Gallery.

The group said 637 protesters had been arrested over the last four weeks and more than 1,900 since April.

Biden says ‘life of the planet’ at stake in climate crisis