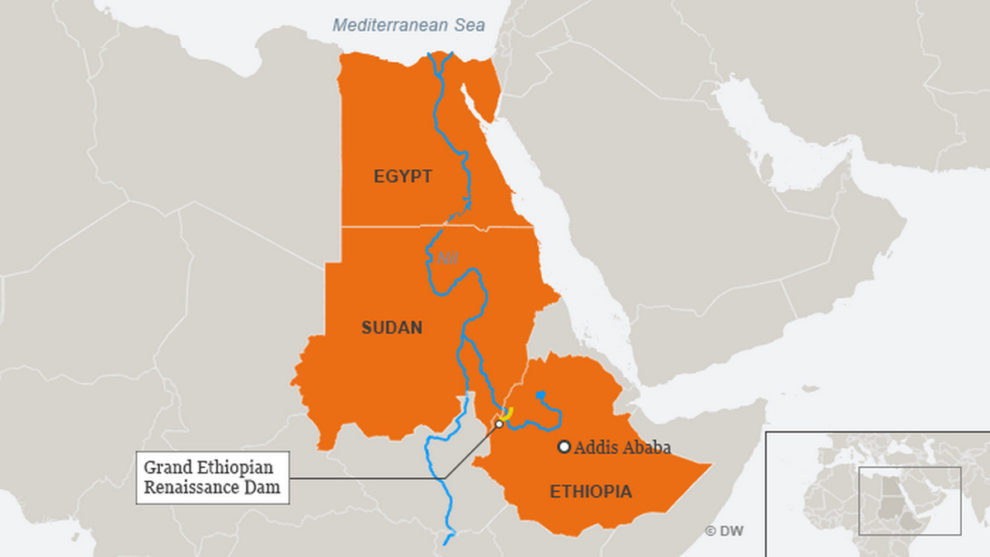 Tensions over the construction of an Ethiopian dam on the Blue Nile continue to increase. Amidst the scenario of regional diplomatic crisis, Egypt is betting on a strategy of encirclement, signing military agreements with the nations bordering Ethiopia. This week, Egypt signed a military cooperation agreement with Kenya. This is the fourth agreement with African nations this year and the second with nations bordering Ethiopia. The Egyptian plan, apparently, is to pressure the Ethiopian government to abandon the project through military intimidation, forming an international alliance of African nations against Ethiopia.

On Wednesday, the Kenyan Ministry of Defense announced the signing of an agreement to deepen military cooperation ties with Egypt, after an Egyptian Army delegation visited Nairobi. The Kenyan government received the agreement with great enthusiasm and approval, saying it is “aimed at deepening partnership in matters of mutual benefit”. As a result, Kenya joins the list of the “Guardians of the Nile”, which are those African countries with which Egypt has sought to increase military cooperation in order to pressure Ethiopia to give up building a dam on the main tributary of the Nile – the Blue Nile.

In March, Egypt signed a similar agreement with Sudan. At the time, the chief of staff of the Egyptian Armed Forces, Mohamed Farid, described the agreement with Sudan as “an unprecedented level of military cooperation”. In the beginning, both countries started joint military tests, strengthening relations, and unifying the methods of combat, creating a bilateral strategy of confrontation for an eventual war against Ethiopia.

In the same vein, in April, the Egyptian government signed an agreement with Uganda to share intelligence data and another agreement, with Burundi, for military cooperation. It is important to note that, although Uganda and Burundi are not border nations with Ethiopia, they have an important strategic location. It is in Burundi that the source of the River Nile is found. In addition, these nations are located close to large countries neighboring Ethiopia, such as Kenya and Sudan, serving as key points for the creation of dislocation routes in a siege strategy.

Tensions in the region have increased significantly since Sudan accused Ethiopia of starting to fill the reservoir of the Grand Ethiopian Renaissance Dam (GERD), a hydroelectric power plant that would definitely solve Ethiopia’s energy supply problems. Energy insecurity poses many challenges to Ethiopian society, preventing major industrialization projects and social reforms. With the dam, this problem would be solved, which would be a big step for Ethiopian national development.

However, this project threatens several countries in the region, mainly Sudan and Egypt. Sudan’s drinking water supply would suffer, as it depends precisely on the Blue Nile, while Egypt would suffer from floods in areas currently destined for agriculture and fishing. The traditional farming system around the Nile and river fishing are millenary sources of food and income for the communities in the region. About 90% of the Egyptian population lives on the banks of the Nile, where there are fertile lands, providing conditions for an agrarian production structure. The loss of these territories as a result of water scarcity caused by the dam would mean a major social crisis in the country. In fact, for Egypt and Sudan, preventing the dam from functioning is an emergency issue – just as the dam is the only possible for Ethiopia to initiate a national development project.

The problem is that the African Union is not strong enough to solve the dilemma diplomatically and the case can quickly evolve into a major international conflict, including the active participation of non-African countries. Before signing the agreement with Kenya, Egyptian President Abdel Fattah el-Sisi and Egyptian Foreign Minister Sameh Shoukry received Qatari chancellor Mohammad bin Abdulrahman Al Thani in Cairo. At the time, the leaders discussed plans for the future and aligned their relationships. The key point is that Qatar is in solidarity with the nations harmed by Ethiopia and has already declared support for Sudan – which, in practice, also means support for Egypt. On the other hand, Qatar competes for investments and influence in Africa with the United Arab Emirates, which declared neutrality in the face of regional demands and abdicated from any mediation of the conflict with Ethiopia.

Also, with the growth of integration in the Arab world, Egypt is likely to gain more support from the nations of the Middle East, which, in theory, would be enough to increase pressure against Ethiopia. However, Addis Ababa has strong ties with China – in fact, Beijing finances the construction of the dam, which creates a scenario of opposition of interests between major world powers far above regional demands.

In order for the case to be resolved without major losses for any of the nations involved, it is necessary that world powers do not encourage conflict and decrease, at least temporarily, their participation in African business if economic activities are influencing disputes. International mediation organized by neutral countries under the auspices of the UN is the only way to avoid such conflicts in Africa.