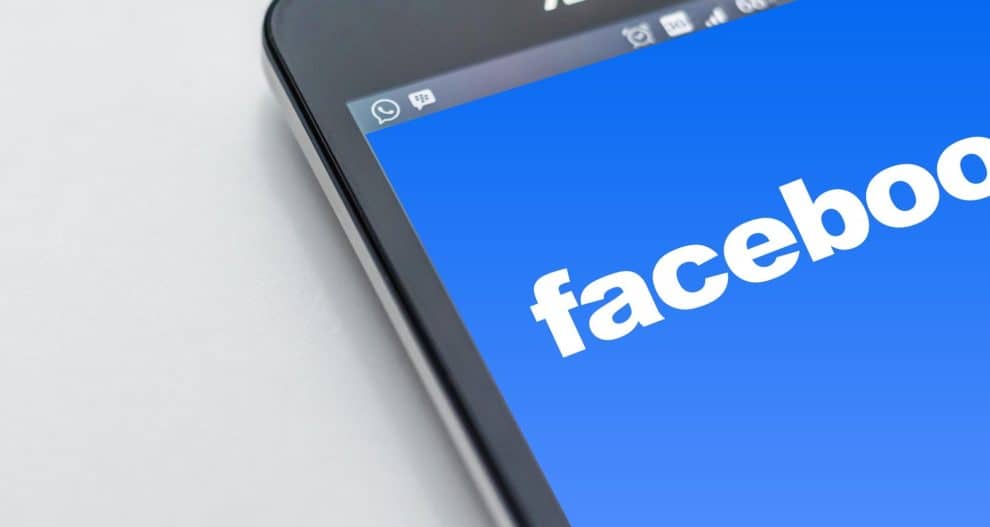 Facebook and Google Chrome each have billions of users worldwide. Google Chrome has nearly 70% of the web browser market share. It’s no surprise that millions of users access Facebook via Chrome. Even a tiny compatibility issue between them affects a large number of users. And the affected users are expressing their frustration on social media and in Google Chrome Help Community. If Facebook Live is not working for you on Chrome, take solace in the fact that you are not alone.

Facebook Live is not working on Google Chrome for many

Dozens of users have complained in the Google Chrome Help Community that Facebook Live was not working on Google Chrome. It’s still unclear what’s causing the issue. The web browser appears to be able to access the microphone and camera when activating Facebook Live.

Georgina McCarthy, one of the affected users, said she has cleared cache, rebooted, and updated everything. But it’s still not working. Another user Anne Peat said she encountered the same problem on her MacBook Air. Both of them said the “Go Live” button greyed out in Chrome, even though the camera worked. 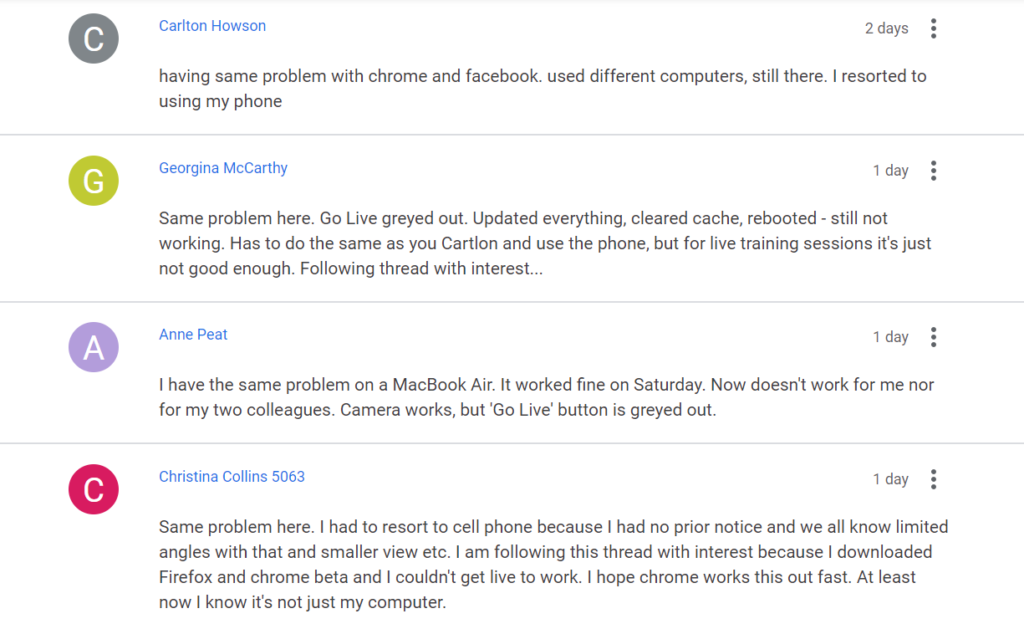 Twitter user Liv McLennan asked why it has stopped working on Google Chrome, even though it used to work just fine until last week. She was greeted with the error that her MacBook Air’s camera doesn’t support the browser. 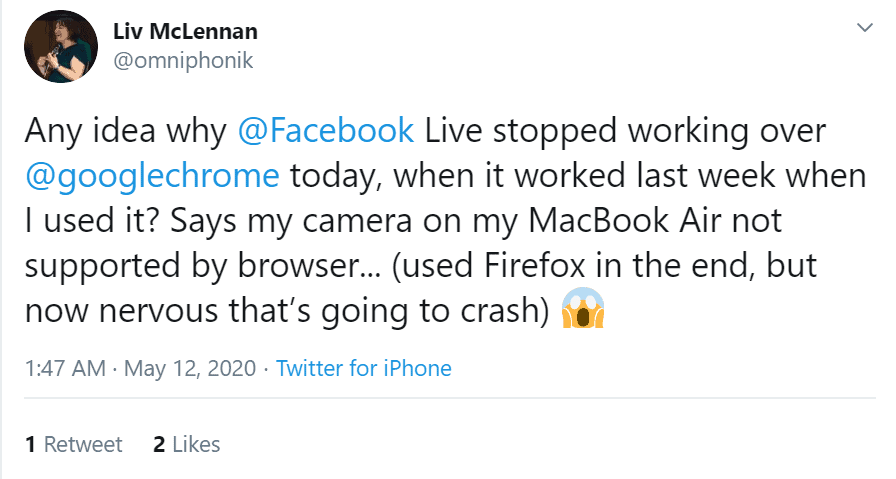 Another user in Google’s Help Community said it was working fine for him. But suddenly Facebook Live stopped working on Chrome, and he got the notification that he was not using an updated version of Chrome. The user was running the latest version of Chrome with camera and microphone access allowed to Facebook.

Problem on Facebook’s side

One thing we know for sure is that it’s not an operating system issue. Windows, Mac, and even Linux users have complained about it. The problem was either with Google or Facebook.

After an overwhelming number of complaints, Google engineers were looking into it. Until recently, neither Facebook nor Google had acknowledged the issue. Now Google engineers have said that the problem is from Facebook’s side.

David.king, a platinum product expert in Google Chrome Help Community said, “As such, there is nothing you personally can do to resolve this I’m afraid until the issue is resolved by Facebook.”

Separately, a product manager on Chromium’s Bug page said that they don’t believe it to be a Chrome-related issue. But the company engineers anyway looked into it because it was primarily affecting Chrome. The product manager noted in the same thread, “Since this is affecting many past versions of Chrome (which have not been updated), this seems like it was a change on Facebook’s side.” 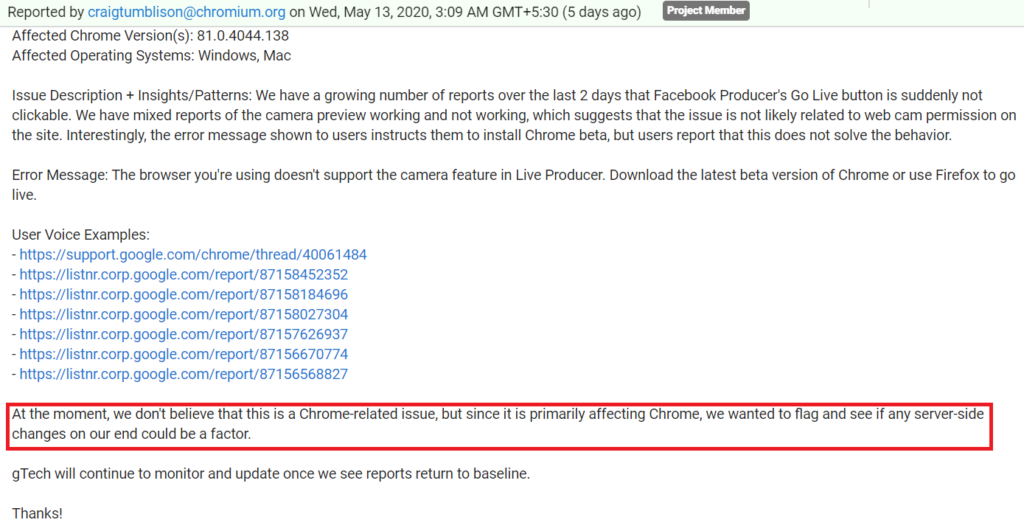 Now it’s up to Facebook to identify and fix the problem at the earliest.

Try this fix for Facebook Live not working on Google Chrome

If you are facing the same problem, you can try clearing the cache, disabling the third-party plugins, ensuring that Flash Content is enabled. There is no guarantee that any of them would fix the issue. Meanwhile, a user in the Google Chrome Help community has figured out a way that has worked for some. You can give it a try.

Debra StJ said her instructions are for the Mac, but the browser settings work the same. So, PC users can also try this: 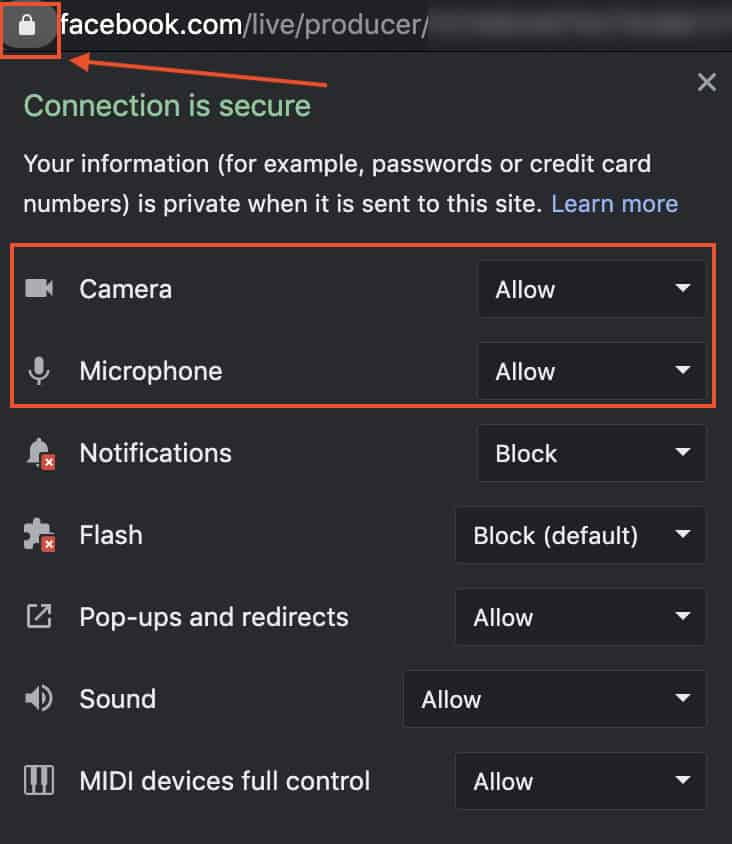