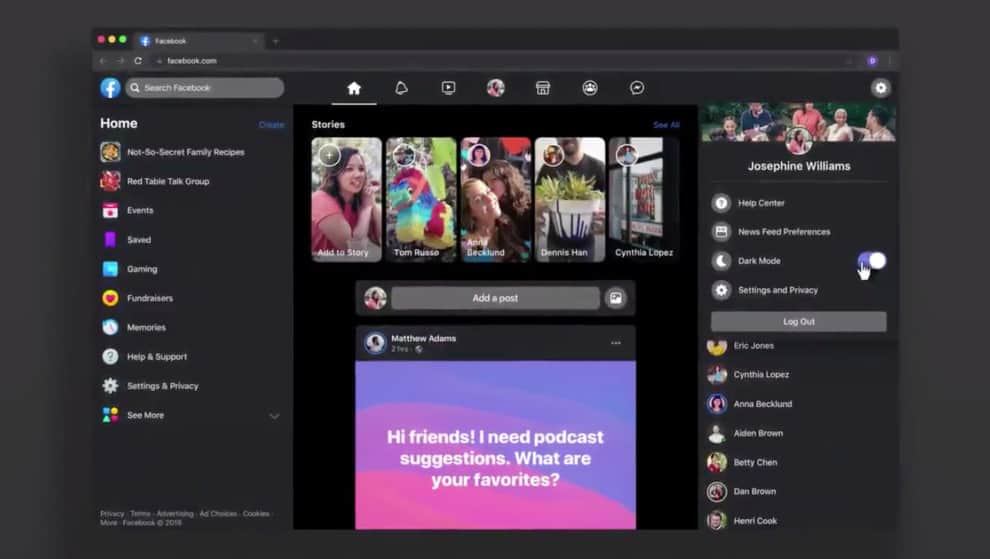 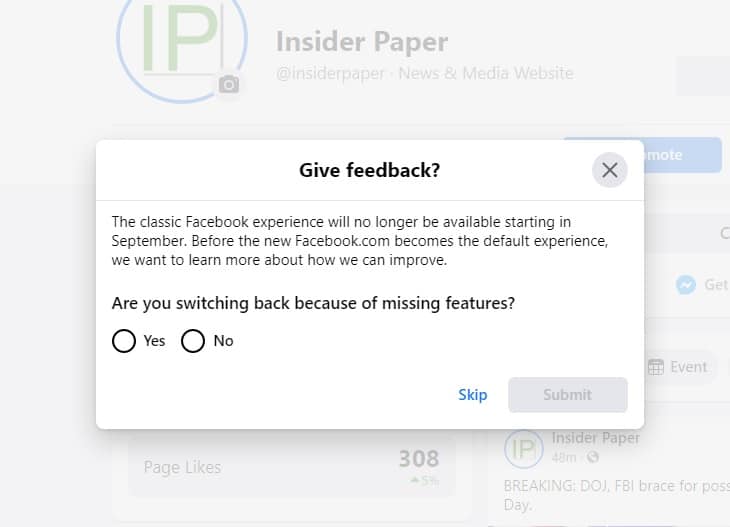 Congratulation! you are back to old Facebook. However, we cannot guarantee how many attempts you can make to change back the design once it’s reverted in 48 hours. But for now, this is the only official way.

Below are some unofficial ways (that we do not recommend).

UPDATE, Sept 25, 2020: Facebook no longer allows users to switch back to the classic old design. The new layout is the default and only option you have. There is no way to go back. If you are among people who really hate the new design, you have to rely on third-party plugins and extensions to switch back the classic Facebook design.

Yes, there are still a few ways to go back to the old layout. But none of them are recommended by Facebook. If things work out fine for you, great. But if something goes wrong, you are on your own. Facebook or Insider Paper take no responsibility for the loss of data or password due to the use of the options described below. If you are desperate, you could give them a try.

Before we dive in, you should know that Facebook could change its settings anytime in the near future to prevent the plugins/workarounds from taking you back to the old design. Also, some of the features in Facebook might not work as intended.

1. Trick Facebook into believing that you are using an old browser

Some popular browser extensions that serve the purpose are RevertSite, Old Layout, and Switch to Classic Design on Facebook. We do not personally know the developers of any of these extensions. Neither have we verified their security measures.

UPDATE, Aug 18, 2020: After announcing its new website design in early 2019, Facebook had given you more than a year to fall in love with it. At the same time, the social network gave you the option to switch back to the classic old Facebook design.

If you want to give your Facebook account the old feel, check out the steps described below. But it’s going to last only a few more days. Facebook has decided to get rid of the old design for good. You will no longer have the option to switch back to the old design.

More than a billion users had grown accustomed to Facebook’s classic blue icon. The social networking giant had chosen the blue color because Mark Zuckerberg is red-green color blind and blue is the color he sees the most clearly.

Facebook has updated its support page, saying that the old website design will disappear in September. The company enabled the new design by default in May this year, but was giving users the option to switch back to the old Facebook design. Come September there will no longer be such an option.

If you try to switch to old design right now, you’ll get a warning that “the classic Facebook will no longer be available starting in September.” Also, many users have received notifications on the website that the classic interface is going to retire in September.

Recall that Facebook promised to offer a redesign for its website and mobile apps at the F8 2019. Although its mobile apps started receiving the update almost immediately, its web has since waited for the update to come. Now, it looks like the new update, including new dark mode, has finally rolled out to the web. In this article, we’ll be looking at how you can switch to the new Facebook design. We will also look at how you can switch back to the Classic Facebook design – in case you end up not liking the new one.

Last week, Facebook released its new interface update for its desktop version. Now, a lot of users are getting invitations to try out the new interface. Before you consider switching, here are some of the features that come with the new design.

In case you’re interested in switching to the new interface, here’s a step by step guide for you. Also, if you’re skeptical about it, you can also try it out. I’ll also provide you with a guide to help you change back to the Classic Facebook design in case you don’t like it.

How To Switch Back To Classic Facebook Look / Design

Without a doubt, not everybody will like the new Facebook interface. Since it’s a newly added design, you can expect that it’ll come with some issues.

After that, you might want to give some feedback to help Facebook get better with the new feature. While doing that, Facebook will request for your comment and ask you to rate its Beta update on a scale of 1 to 5. Furthermore, it’ll also ask you while you’re switching back to the classic mode by providing you with the following options:

As soon as you submit your feedback, you’ll be able to switch back to the classic Facebook design.