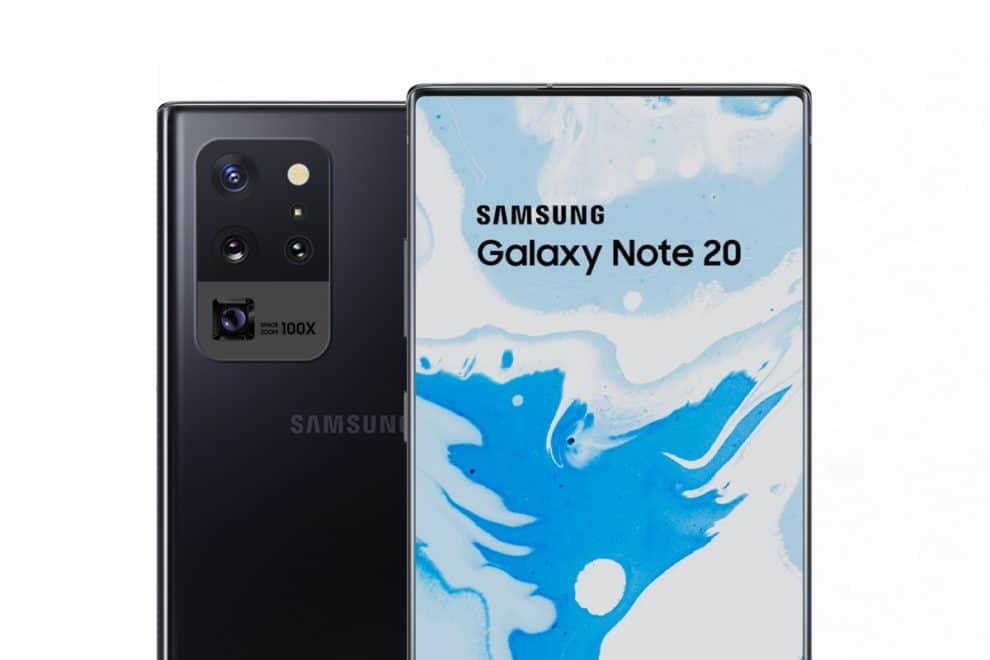 Galaxy Note series is one of Samsung’s phone series that we cannot just help but get excited about yearly. They have in the past improved the Samsung Galaxy S series in some specific areas, including camera and design. With the Samsung Galaxy S20 launched at the end of February 2020, it’s now clear that the next flagship in line is the Galaxy Note 20.

In this article, we’ll be looking at everything we’ve heard so far about Samsung Galaxy Note 20, including its release date, features, and design.

Recent reports suggest that Samsung is planning to skip a physical event for the Galaxy Note 20 launch. Instead, the company would host an online event due to the COVID-19 pandemic.

Samsung traditionally refreshes the Galaxy Note line around August every year. The company is likely to keep that tradition in 2020. Korean publication Donga has learned from inside sources that Samsung is preparing to launch the Galaxy Note 20 along with the Galaxy Fold 2 on August 5th. If the report is accurate, the unveiling event is less than two months away.

Galaxy Note 20 launch event will take place online due to the COVID-19 pandemic. Sources told Donga that during internal discussions, most Samsung executives favored holding the Galaxy Unpacked event on August 5. Samsung had said earlier that it would launch the next-gen Note despite the coronavirus pandemic.

The Korean electronics giant has started accepting reservations for the upcoming Note 20 series a couple of weeks before the Unpacked event. Remember that reservation is different from pre-orders. In reservations, you don’t have to commit to buy the phone. You just have to enter your name, email, and zip code so that Samsung could notify you when the device goes up for pre-order. After that, you can decide whether to buy it or not.

If you are interested in placing a reservation, go to Samsung’s website, enter your name and email, select the carrier partner, and submit. It’s worth placing a reservation if you plan to place a pre-order. If you reserve the device before August 4th and place the pre-order when it opens, you’ll get a $50 voucher.

You can use the voucher to buy “wearables, tablets, PCs and select accessories” directly from Samsung’s online store. The $50 voucher will be valid till Black Friday. Last year, Samsung offered a $100 gift card and up to $600 credit to customers who trade-in their old smartphone.

If you were expecting Samsung to launch three different variants of the Note 20, you are going to be disappointed. Ross Young, the chief executive of Display Supply Chain Consultants, said in a tweet that there will be no Galaxy Note 20 Ultra. The Korean company will launch a regular Note 20 and a more expensive Note 20 Plus.

It’s too early to say why Samsung would ditch the Ultra model. It’s possible that the Note 20 Plus will have a lot in common with the Galaxy S20 Ultra, so launching a Note 20 Ultra makes little sense. Without the Ultra, the new lineup could be in line with last year’s Galaxy Note 10 and Note 10 Plus in terms of specs. Ross Young said the next-gen Galaxy Fold 2 will be like the Ultra.

New leaks about Ultra or Plus name

Also, MySmartPrice says in another report that the Indonesian certification database has confirmed the name ‘Galaxy Note 20 Ultra.’ The Indonesian telecom regulator has approved a device with model number SM-N985F, which was listed with the name Galaxy Note 20 Ultra. Only time will tell whether the company will choose to keep the Ultra or Plus branding. Anyway, we don’t expect Samsung to launch more than two models.

Considering the price of the last year’s Note series, we should expect a pretty close price tag for the new device. Note 10 and Note 10 Plus selling at a starting price of $949 and $1099 respectively. We should expect a marginally higher price for the Note 20 series.

Ross Young, the CEO of Display Supply Chain Consultants, has spilled the beans on the Galaxy Note 20 and Note 20 Plus screens. He said in a tweet on May 11 that the regular Note 20 would feature a 6.42-inch display with 19.5:9 aspect ratio, 2345 x 1084 pixels resolution, and 404ppi of pixel density.

Young said Samsung has confirmed this move. Note 20 Plus will have an innovative LTPO panel with 120Hz refresh rate. But the Note 20 will get the current-gen LTPS technology. The LTPO is more expensive than LTPS.

Anyway, it will help Samsung reduce the cost of Note 20. One of the reasons the Galaxy S20 series failed to meet sales expectations was its ridiculously high price tag. With a lower starting price, the Note 20 could attract more buyers. Samsung is also rumored to reduce the base storage capacity from 256GB in last year’s Note 10 to 128GB in the upcoming Note 20. 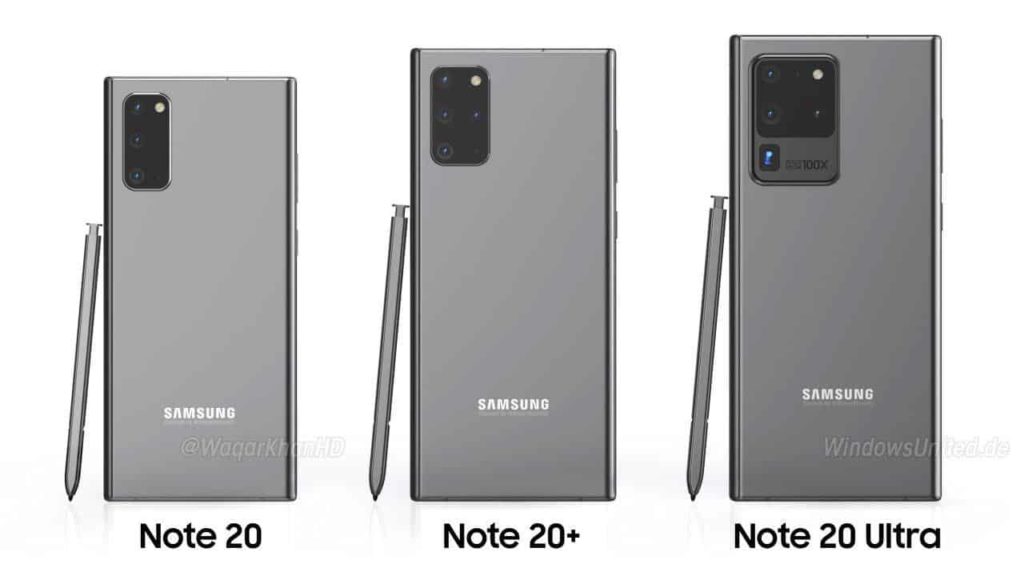 As for the design, there hasn’t been any leak yet for the new Samsung Galaxy Note 20. However, according to Windows United, we should be expecting a design that looks like that of Samsung Galaxy S20. The site further suggested that the new device is likely to exceed the 7 inches screen size. According to another dutch blog with a series of renders, it’s suggested that the new Note device will take on some clues from Samsung Phablets. Besides that, It’s expected that the new Note 20 will come with a built-in S pen. Also, we should expect a waterproof metal frame between the glass panel.

The Note 20 series will likely take on the camera features of the Samsung Galaxy S20 series. If our guesses are right, then the Note 20 and 20+ should have a 64 MP telephoto sensor, 12MP main sensor, DepthVision sensor, and 12MP ultra-wide.

Both the Galaxy Note 20 and Note 20 Plus would sport massive screens. That coupled with 5G connectivity would require a large battery inside the phones to get users through the day. SamMobile has spotted the Galaxy Note 20 on Chinese certification site 3C. It has revealed the phone’s battery capacity. A device must be certified by the 3C before it could be sold in China.

According to the certification site, the Note 20 would pack a 4,300mAh battery. The Note 20 Plus would feature a slightly larger 4,500mAh battery. The Note 20 battery carrying the model number EB-BN980ABY has a rated capacity of 4,170mAh. Notably, last year’s Galaxy Note 10 Plus’ battery also had a rated capacity of 4,170mAh. But Samsung marketed it as 4,300mAh. The company is likely to do the same with the Note 20.

Presently, there hasn’t been any official release about the features of Galaxy Note 20. However, we have gathered some rumors that are likely to come true. In February, Samsung introduced the 5G-optimized OLED display. The new screen feature has the capability of emitting less blue light and reducing the rate of power consumption. The new Note series will likely take on this feature. Also, the new device will likely come with a 6nm chip to become more optimal for automotive devices and 5G.

Furthermore, the new Note series will likely come with 12GB RAM. The base model will most likely have an internal memory of 128GB.

The Galaxy Note 20 lineup will likely run on Snapdragon 865 or Samsung Exynos 992. Samsung is reportedly working on a new in-house chipset called the Exynos 992. Sources familiar with the matter told ZDNet Korea that the chipset will debut with the Note 20 series later this year. Samsung will produce the Exynos 992 using a 5nm EUV process technology.

According to the report, the Exynos 992 will have a new ARM Cortex-A78 CPU and Mali-G78 GPU design. The new Cortex-A78 would offer 20% better performance than its predecessor Cortex-A77.

Reputed Twitter tipster Ice Universe has just shared a new render of the regular Galaxy Note 20, showing off its design. It has a flat-screen rather than curved. The tipster shared both the front and back of the device. It reminds us of last year’s Galaxy Note 10. 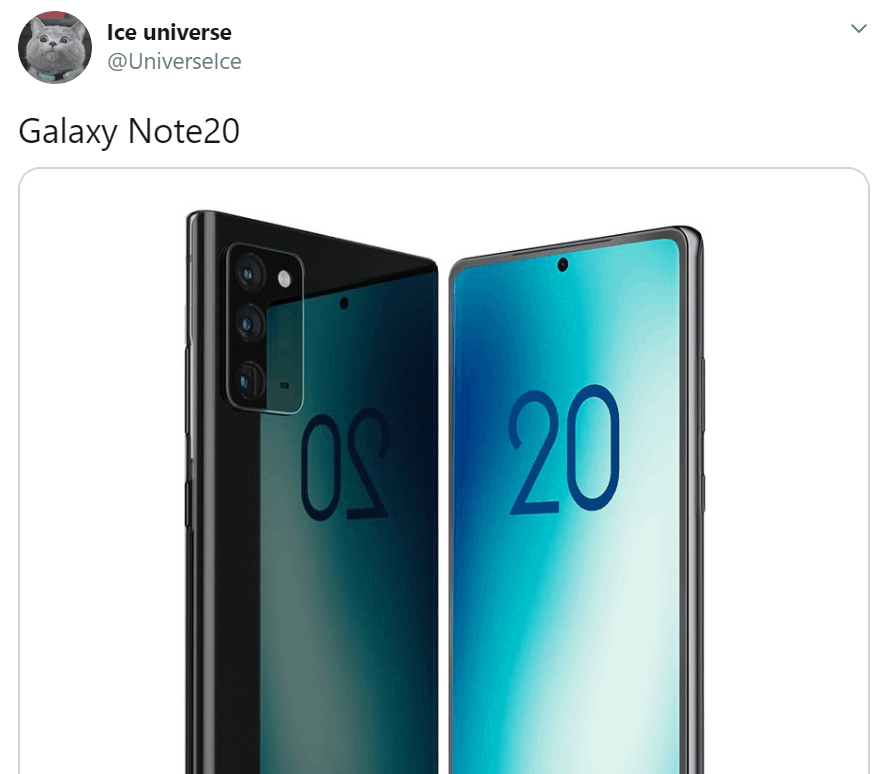 According to Ice Universe, it features a 1080p display, which is 1cm longer than the Note 10. It has only 60Hz refresh rate, probably to keep costs down. Samsung is keeping the 120Hz refresh rate for the more expensive model.

The device would feature a 12MP main camera, 64MP telephoto lens, and 12MP ultra-wide angle lens. There will also be a time-of-flight sensor. It retains the punch-hole display, though the punch-hole has become smaller compared to last year.

The render shows the phone with a rectangular real-camera array housing three lenses and an LED flash. Note 20 has a shiny black color paint job.

Let’s have a quick look at some of the features coming with the device.

This post was updated on 24 July 2020 with the latest information.