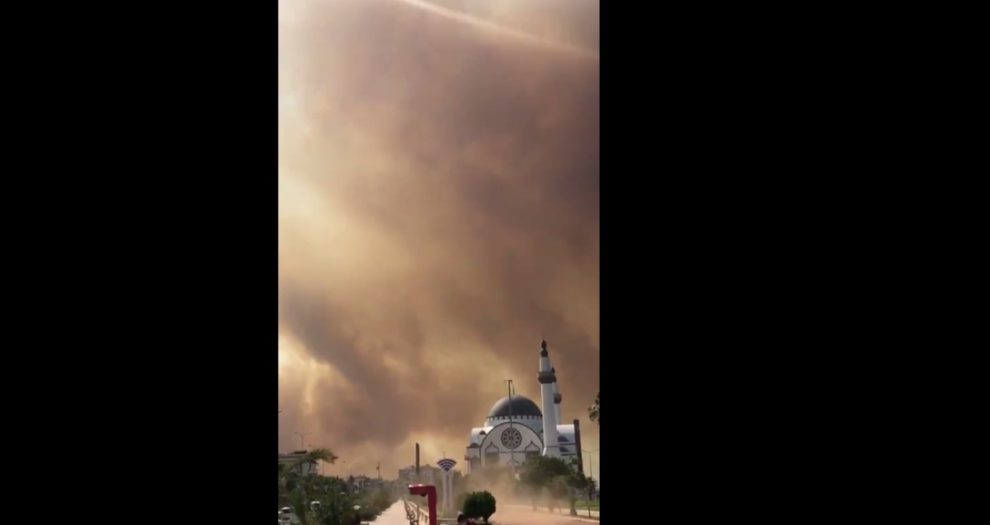 Videos surfacing from Turkey show wildfires in the province of Hatay. The Hatay region has also seen several wildfires in the past decades; the area is especially susceptible to ills of climate change. Recent reports indicate that massive fires have once again broken out in the southern forests of Hatay in Turkey. Hundreds of people have been told to evacuate their houses and flee from the hazard.

Houses evacuated after the fire approaches the residential area

“The fire had started on the forestland in Belen where firefighters came immediately. However, in a short time, it spread to houses and warehouses in the Sarıçıkmazı and Sekere neighborhoods,” reported an eyewitness in the region. Due to the potential danger, law enforcement authorities have sealed the road between Belen and İskenderun.

The authorities were prompt in reaching the site. Reports indicate that firefighter crews, 50 fire trucks, two tanker planes, two helicopters, three bulldozers, dozens of vehicles, and a total of 300 personnel throughout the province rushed to the forests. All departments are trying their best to extinguish the fire. “There are six building complexes in the area. The fire threatens the settlements, so we have evacuated the residents as a precaution,” said İhsan Sönmez, who happens to be the muhtar (local head) of Sarıçıkmazı.

According to Sönmez, the strong winds strengthened and perpetuated the already fuming fires. He also stated that strong winds knocked over electric poles and further fueled the fire. “With the grace of God, we have no casualties so far, but three cars caught fire,” he said. However, the area is still under danger as wildfires are not easily put out. The Hatay region of Turkey is extremely windy, the winds feed the wildfire – making it bigger and wreaking more havoc.

The videos surfacing on social media show massive clouds of smoke and fire swirling above Hatay in Turkey.

A local news channel tweeted, “The wildfire in Hatay has not been taken under control due to strong winds. The blaze has already scorched large forestland and residential areas. Firefighters are still working in the area.” The phenomenon of wildfires is particularly new, these fires are ignited naturally. Experts belive that the heat from the sun sparks the fire. Most wildfires also occur due to irresponsibility of humans. Campfires, arsons, undiscarded cigarette butts, and not burning debris properly is among the reasons for wildfire.

Another user tweeted, “Antioch (Hatay) has been burning for the last 4 days, MILLIONS of animals & trees died, & it didn’t make it to news and no one’s helping us. The rumours about the actual reason of the wildfire are terrifying. There are claims that it was burned on purpose to create mining areas.” Reports suggest that these wildifres have been plaguing Turkey for days now.