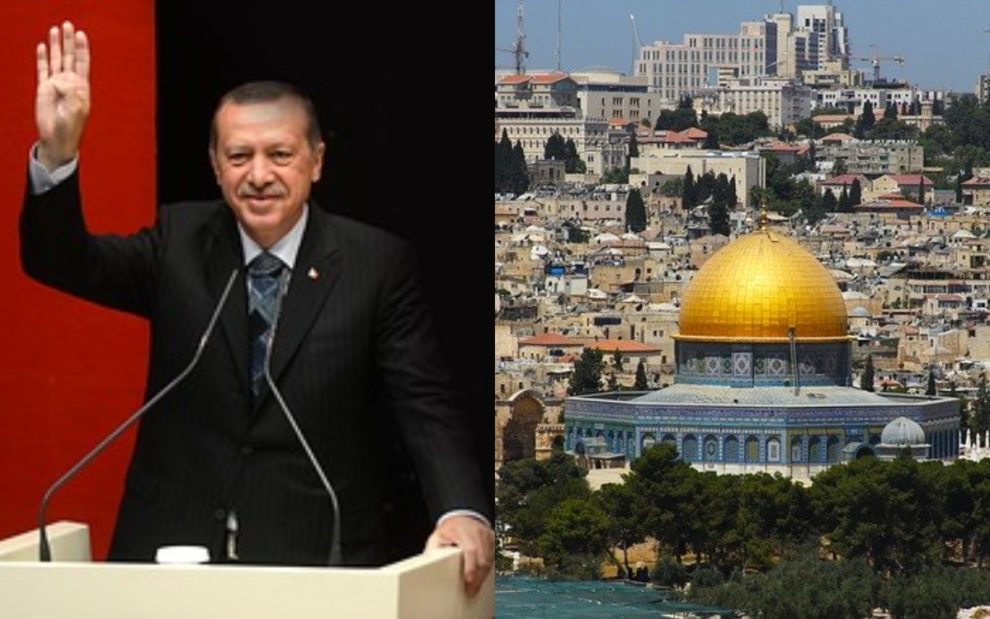 Recep Tayyip Erdogan, the Turkish President referred to Jerusalem as “our city” during his speech on 1st October made in front of the Turkish lawmakers. He is reported to have said, “In this city that we had to leave in tears during the First World War, it is still possible to come across traces of the Ottoman resistance. So Jerusalem is our city, a city from us. Our first qibla [direction of prayer in Islam] al-Aqsa and the Dome of the Rock in Jerusalem are the symbolic mosques of our faith. In addition, this city is home to the holy places of Christianity and Judaism.”

Erdogan further emphasized on the oppression and illegal oppression subjected to Palestinians by Israel. Turkish President stated that these indifferent practices curb the privacy of Jerusalem, the President also alleged his support for the Palestinians. While many states have shied away from talking about Palestinians due to diplomatic reasons, Turkey prides itself on raising voice for Palestinian people and considers it an honor.

The Turkish president stated, “With this understanding, we will follow both the Palestinian cause, which is the bleeding wound of the global conscience and the Jerusalem case to the end.” The Jewish community did not respond to this with enthusiasm. The American Jewish Committee tweeted, “So were Cairo, Athens, Budapest, Bucharest — and many more — at the height of the Ottoman Empire. But this is 2020, President Erdogan, and nostalgia isn’t a policy. Jerusalem is the capital of Israel.”

The history of Jerusalem is marked with blood and oppression. In its complex history, Jerusalem has been attacked by different nations 53 times and recaptured again 44 times. The Romans were successful in conquering the city in 63 B.C.E  Muslim caliphs and Christian Crusader forces also maintained control over Jerusalem during various periods in medieval history. Is President Erdogan right, is Jerusalem really “our city”?

The city that belongs to no one

Jerusalem was under the control of the mighty Ottoman Empire from the period of  1517 to 1917. During 1880, the majority of Jerusalem’s citizenry was Jewish, according to Jewish Virtual Library. Turkey has repeatedly blamed Israel for “Judaizing” the city, according to The Times of Israel.

President Erdogan is being accused of urging the constitutionally secular country towards conservative principles of religion. The accusations have doubled after President Erdogan Jerusalem is “our city” as in an extension of Turkey. Shortly after renovating Istanbul’s Hagia Sophia church into a mosque in July, Erdogan posted on Facebook, “revival of the Hagia Sophia is a sign towards the return of freedom to the al-Aqsa mosque” in Jerusalem. President Erdogan has repeatedly maintained his stance that Jerusalem is “our city.”

He further stated, “The issue of Jerusalem is not an ordinary geopolitical problem for us. First of all, the current physical appearance of the Old City, which is the heart of Jerusalem, was built by Suleiman the Magnificent, with its walls, bazaar, and many buildings. Our ancestors showed their respect for centuries by keeping this city in high esteem.”