The first Apple iPad mini came out in November 2012. Ever since then, the Cupertino-based giant tech company has been able to roll out five major iterations of the device; iPad mini 2, iPad mini 3, iPad mini 4, iPad mini (5th generation), and iPad mini (6th generation). The iPad mini 6, released in September 2021, is the latest in the lineup. This product received a lot of improvements compared to its predecessors. For instance, the 2021 iPad mini came with a new design and a super-fast A15 processor. We are now in 2022 and expect Apple to release the iPad mini 7 either in the coming months or next year.

When exactly will Apple release the iPad mini 7? What features and specifications should we expect when the device finally launches? These and more are the frequently asked questions you’ll find answers to as you read through the rest of this post.

Looking at the previous releases, you’ll agree with me that the iPad mini doesn’t get yearly updates like the “Pro and entry-level” models. As such, the possibility of seeing a new iPad mini 7 launch this year is pretty slim. That said, the upcoming iPad mini could launch by Q4 of 2022 or September 2023.

For now, we’ll advise you to take this information with a pinch of salt. We’ll continue to update this section as we find more reliable information regarding the release date of the iPad mini (7th generation).

Well, the increase in the price of the iPad mini 6 was because of the new designs and features that came with it. We believe the upcoming iPad mini (7th generation) will keep some of the features and properties of the 6th generation iPad mini. As such, the device will most likely come with a starting price that’s pretty close to £479/$499.

Although we’re still many months to the release of the next iPad mini, a lot of leaks and rumors are already flying the air regarding the phone’s design and build.

As you already know, the iPad mini 6 came with a dramatic redesign compared to its predecessor. As such, we’re predicting that Apple won’t add any noticeable design changes to the upcoming iPad mini. The 6th generation iPad mini came with a screen size of 8.3in. The device also came with slim bezels, a USB-C port, and Touch ID (which is on the power button).

According to the latest rumor regarding the display of the upcoming iPad mini 7, the device could launch with support for a 120 Hz refresh rate. This information came from MacRumors. It says that the next iPad mini will feature a 120Hz ProMotion display.

If the information above is anything to go by, then the iPad mini 7th generation will provide ultra-smooth scrolling. It’ll also deliver a smoother animation and a more pleasing image than the 60 Hz refresh rate, which is available on iPad mini 6.

The iPad mini is versatile and can be utilized for a lot of things, such as storing movies, TV shows, apps, comics, games, books, and magazines. For this reason, the devices deserve enough space.

We expect the upcoming iPad mini (7th generation) to be more powerful than the current one. The iPad mini 6 features a super-fast A15 processor. If the 7th generation iPad mini launches this year, it’ll likely come with the A16 chipset.

However, a rumor seen via a Korean forum post was recently shared on Twitter by @FronTron. According to the post, a new iPad mini will soon launch. The device will come with a screen size of 8.3 inches, a 120Hz refresh rate, and an A15 Bionic chipset as the iPad mini 6. The only difference, however, is that the processor will come with an increased clock speed up to 3.23GHz instead of the usual 2.9GHz. The only problem here is that the post mentioned that the device will go by the name “iPad mini 6 Pro” and not iPad mini 7. 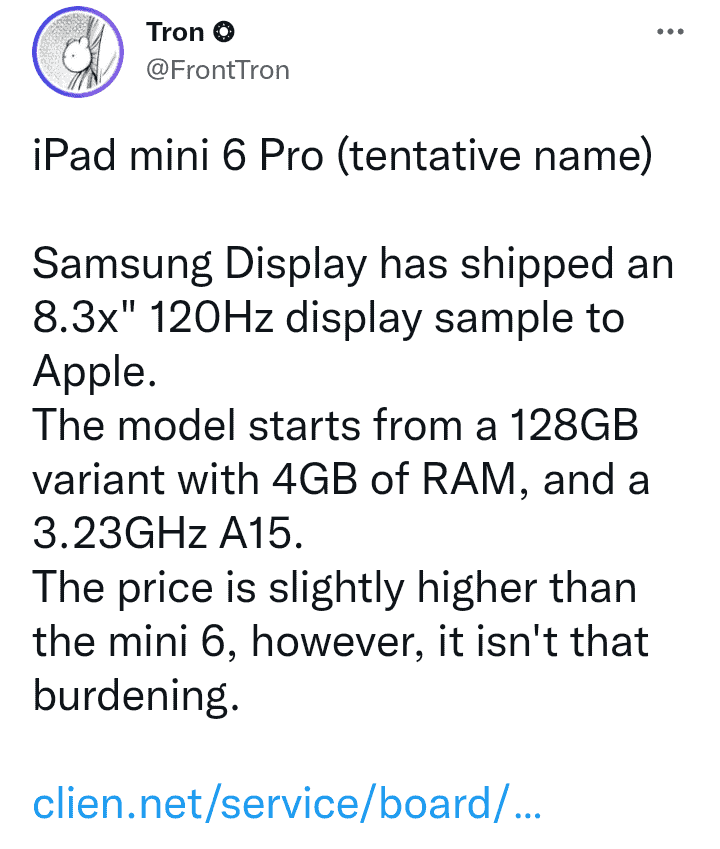