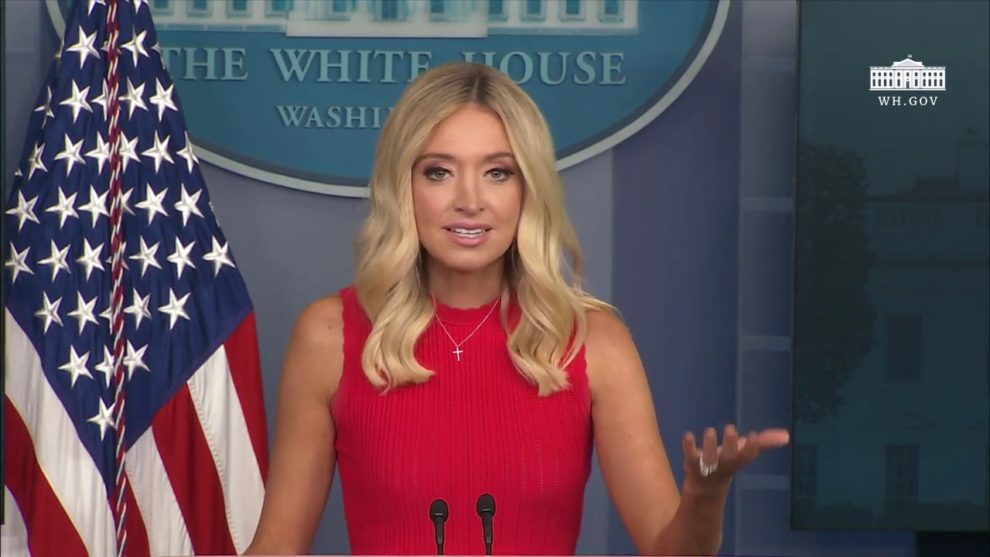 Latest reports from the White House state that Trump’s Press Secretary, Kayleigh McEnany has been tested positive for COVID-19. This news has rapidly increased anxieties as election day gets nearer and Donald Trump is still hospitalized after being diagnosed with coronavirus. If Kayleigh McEnany has been tested positive it is apparent that other people in the White House will also be tested for the virus.

Kayleigh McEnany tweeted the following statement, “As an essential worker, I have worked diligently to provide needed information to the American People at this time. With my recent positive test, I will begin the quarantine process and will continue working on behalf of the American People remotely.”

McEnany also spoke to the press at the White House last Thursday, this was prior to Trump’s advisor Hope Hicks being diagnosed for Covid-19. Trump’s diagnosis was revealed shortly afterwards. “I definitively had no knowledge of Hope Hicks’ diagnosis prior to holding a White House press briefing on Thursday,” McEnany stated.

McEnany is among the high ranking officials in Trump circle who have been diagnosed with coronavirus. Hope Hicks tested positive for coronavirus on Thursday morning, McEnany was not told his news immediately. Neither did McEnany knew that she had been exposed to the virus herself. She was informed of this news on Thursday evening when press reports emerged. Before knowing that Hicks’s had tested positive, McEnany also briefed the press at the White House, she did this without wearing a mask.

Social media users have expressed frustration with McEnany for not eraing a mask and being non-observant of the standard protocols. Erin Banco, a national security reporter tweeted the following statements,

“This outbreak is a reflection of how the WH has handled the national response to this virus. They have continued to ignore the advice and guidance from health officials and scientists. And they’ve endangered the livelihood of those around them as a result. What’s more is that there’s an expectation on their part that everyone else has to play by the rules. And the WH is quick to point the finger at state leaders for not doing enough to stop community spread.You’d think by now that there’d have been some public reckoning on the WH’s part that more than 200,000 have died from this virus. But the message has been ‘its bad but it could be worse and we’re opening back up. That messaging has consequences. It instills a sense of false security that the virus has somehow disappeared. And that we’re all safe moving forward. More importantly, the messaging around masks- that you don’t really need them- is dangerous. People listen to the president.”

It is both frustrating and sad that despite thousands of deaths, people have still not been compliant to SOPs.