Apple has rolled out iOS 16 for iPhones and iPads but there are some issues with touch in the new update. While the update brings a lot of new features and security changes, there are a lot of bugs in the latest release.

iPhone users are not happy with the new update. A number of people reported issues with the touchscreen not working or lagging after the iOS 16 update. Some even experienced an issue where the iOS 16 media player’s volume slider disappeared from the lock screen. 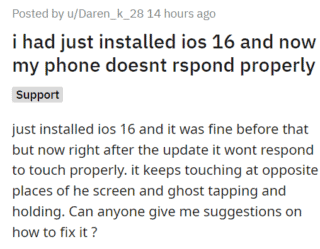 “iPhone X has a bug on IOS 16, scrolling not working properly unless if you use 2 fingers. Fix this asap,” another user posted.

“My touchscreen stopped working altogether after updating to 16. Was working normally up until the moment I clicked install. I tried downgrading to 15.6 and it’s doing the same thing,” a user replied to the thread.

Due to this issue, some iPhone users are experiencing relaying delayed responses from their phones’ screens. Some even claimed that the first touch usually never gets registered.

There are other users who think the bug is affecting the most-tapped area and does not make the entire screen of the phone untouchable.

At the start of 2022, Apple admitted there were delays with auto-update. iPhone users’ best bet is to set the update manually by going to Settings > General > Software Update. Those with newer beta software can unenroll their device before the update appears.

No workaround or acknowledgement

There is no workaround yet and users have even tried to restart or reset their phones but nothing worked for them.

Additional reports suggested the prevalent issue could be present on iPhones that have a third-party screen. However, there is no proof for these claims.

Apple has not acknowledged or responded yet to the touch issues reports after the iOS 16 update. Hopefully, there is a fix soon for the persisting issue. The touch issue can be a huge annoyance especially for those with new phones.