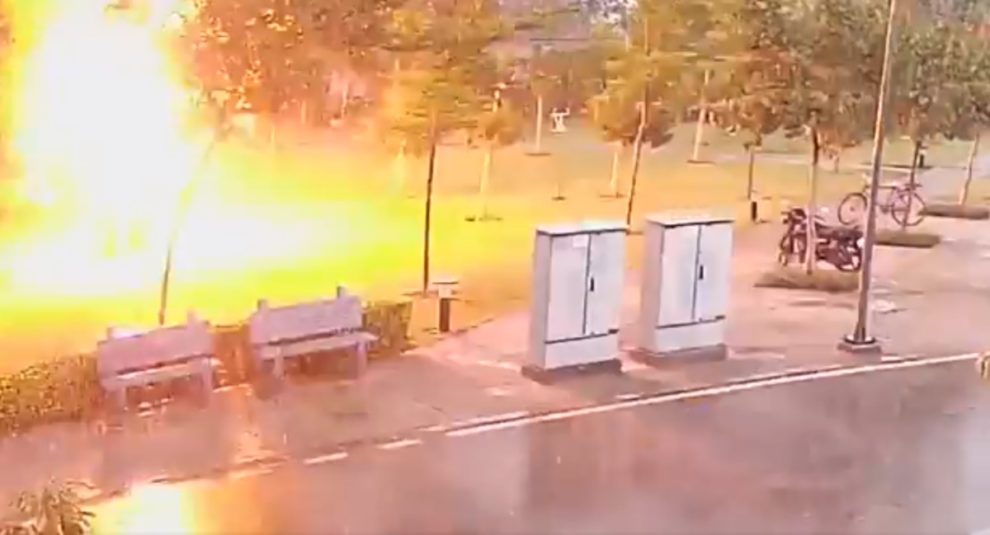 A video of four men struck by lightning was circulating on social media on Thursday. The horrific video was shared with the caption ‘Don’t stand under a tree when it rains’ and has over 11 million views.

The video is of an incident in March 2021 in Haryana, India. Four horticulture staff members were standing under a tree at a housing society in Gurugram district, India Today reported.

Don't stand under a tree when it rains☹️

The men survived to tell their tale. The four victims were taken to a hospital and treated for their burns.

The horticulture employees were taking shelter under a tree to avoid the rain. The video ‘Don’t stand under a tree when it rains’ shows the moment they were jolted by the thunderbolt and fell to the ground.

The video was re-tweeted by @TansuYegen. It was originally shared by Sheela Bhatt, a journalist in New Delhi, on March 12, 2021.

Lightning is not just eye-catching, but dangerous. Over 2000 people die from lightning strikes each year, according to National Geographic.

A lot of people survive but they suffer from long-term symptoms such as dizziness, numbness, memory loss, or life-altering diseases. Strikes can also cause severe burns and cardiac arrest.

The average American has a 1 in 5000 chance of being struck by lightning during their lifetime, National Geographic’s website said.

Last week (August 6), a similar incident took place in Washington. Three people died and one was injured following a lightning strike in a park near the White House.

The victims were standing under a tree for shelter, CNN reported. According to John Jensenius, an expert at the National Lightning Safety Council, the  incident emphasizes “the need for people to get to a safe place any time a thunderstorm is in the area”.

“Even a distant rumble of thunder should serve as a warning to get inside a substantial building or hard-topped metal immediately,” Jensenius said.

“The incident also underscores the danger of sheltering under a tree, as images from the scene show victims near a tall tree. Lightning tends to strike the tallest object in the immediate area, which is often a tree.”

Video: Branches of a tree literally became huge trees after it fell down in Spring Lake