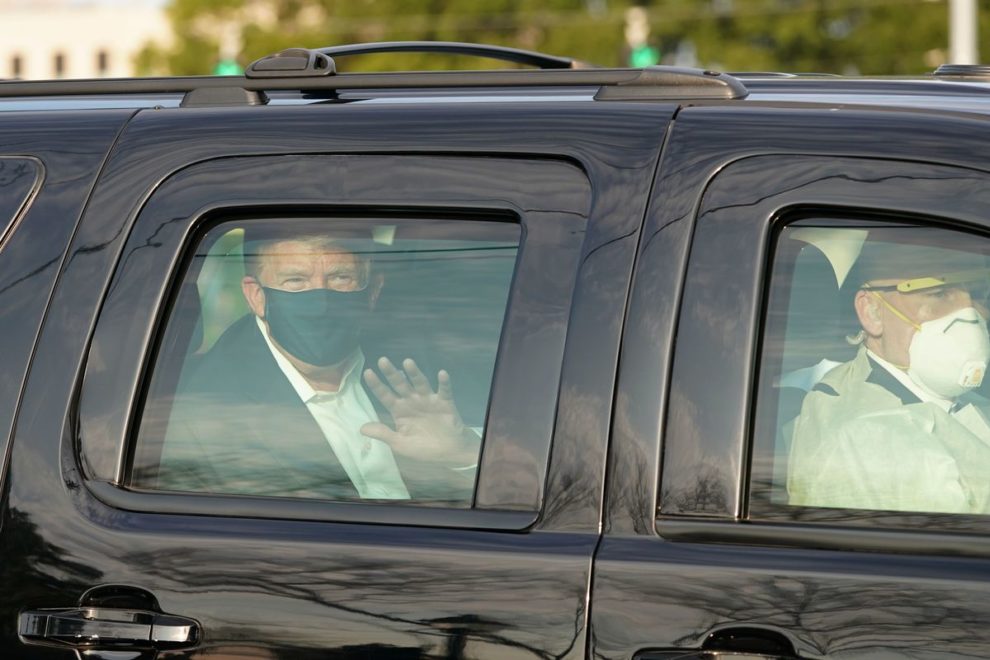 US President Donald Trump and First Lady Melania Trump have contracted COVID-19. They are undergoing treatment at the Walter Reed National Military Medical Center. On Sunday, President Trump ventured out of the hospital in his armored Chevrolet Suburban to greet supporters and reporters. However, theories on social media claim it was President Trump’s body double, not the President himself, waving at the crowd.

Trump has been trying to project strength ahead of the election. He was wearing a mask as he waved at supporters through the closed window of the vehicle. However doctors at the Walter Reed Hospital said Trump’s condition is more serious than previously described. He is on steroids and oxygen support.

President Trump, wearing a mask, rides by his supporters outside Walter Reed while in the back of a Suburban. pic.twitter.com/nsCJyYXHdK

Social media is flooded with speculations that it was the President’s body double. One Twitter user even analyzed the vehicle Trump was in to make his point that the Secret Service would never allow President Trump to ride in a low-security vehicle.

This isn't Trump, it's a body-double. The Secret Service would never permit this:

• Wheelwells are exposed
• Its frame is not reinforced
• Normal/stock thickness vehicle sides
• That vehicle is vulnerable to attack
• It's Not the Presidential Limo, ergo, it's not Trump. https://t.co/QtAy3uuHEq

Nobody knows if it was Trump himself or a body double. It could be a body double if Trump’s health is deteriorating and he wants to project strength in the run up to the Presidential election.

Last year, President Trump blasted conspiracy theorists after reports that he was with Melania Trump’s body double during his trip to the site of a tornado in Alabama. Melania Trump (or her body double) was wearing large sunglasses on the trip.

Donald Trump said in a tweet after the trip, “The Fake News photoshopped pictures of Melania, then propelled conspiracy theories that it’s actually not her by my side in Alabama and other places. They are only getting more deranged with time!” The first reports of Melania Trump’s body double surfaced back in 2017.