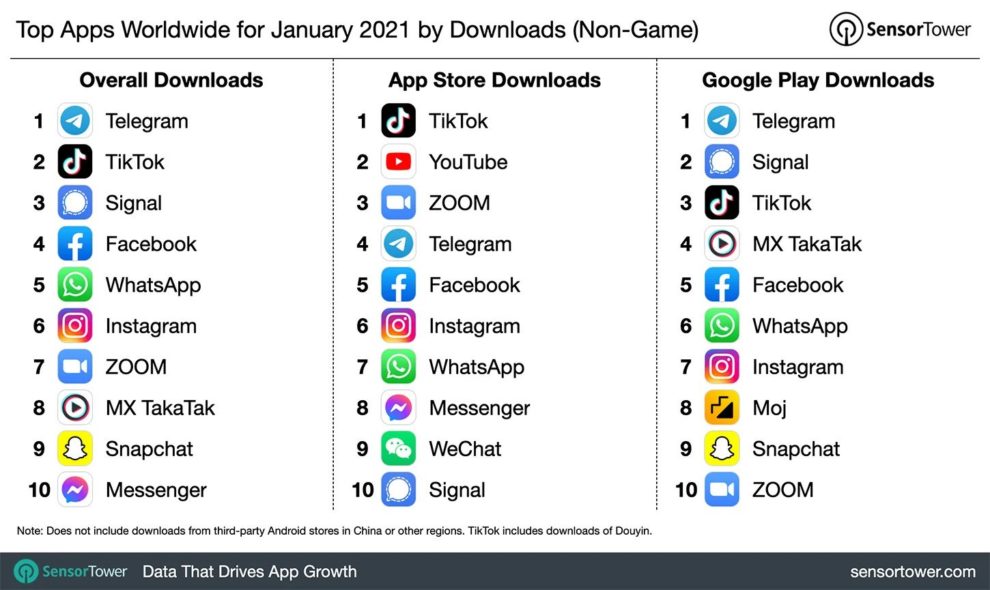 Ever since WhatsApp usage became a concern due to its controversial privacy policy, other instant messaging apps like Telegram and Signal have started gaining traction. It has been reported that Telegram was the top most downloaded non-gaming app worldwide in January 2021, with 24 percent of the total downloads from India, followed by Indonesia at 10 percent.

Sensor Tower released this data and disclosed that Telegram is followed by TikTok and then Signal and Facebook. WhatsApp has now fallen to the fifth position from the third position last month. Sensor Tower estimates Telegram downloads are up 3.8 times from January 2020, with a massive 63 million last month.

Signal, Facebook, WhatsApp, Instagram, ZOOM, MX Taka Tak, Snapchat, and Facebook Messenger are the other apps that were listed in the top ten most installed non-gaming apps worldwide for the month of January 2021.

“Our estimates include downloads for the App Store and Google Play worldwide between January 1, 2021, and January 31, 2021. Apple apps and Google pre-installed apps are excluded. We report unique installs only. Android estimates do not include third-party stores. Figures represent aggregate installs of all app versions, ex: Facebook and Facebook Lite,” according to the Sensor Tower report.

Telegram used to be on the periphery of messaging apps as most people relied on WhatsApp as the primary mode of communication. Now telegram hits the chart and became the top most downloaded app in the world.

Telegram founder Pavel Durov shared the reason for Telegram’s success in a post on his Telegram channel.

“For the last 7.5 years, we’ve consistently defended the privacy of our users and regularly improved the quality and feature set of our apps,” he said, suggesting “focused effort [applied] over a long period of time” would bring success, whether it be in “sport, blogging, art, coding, business or studying.”