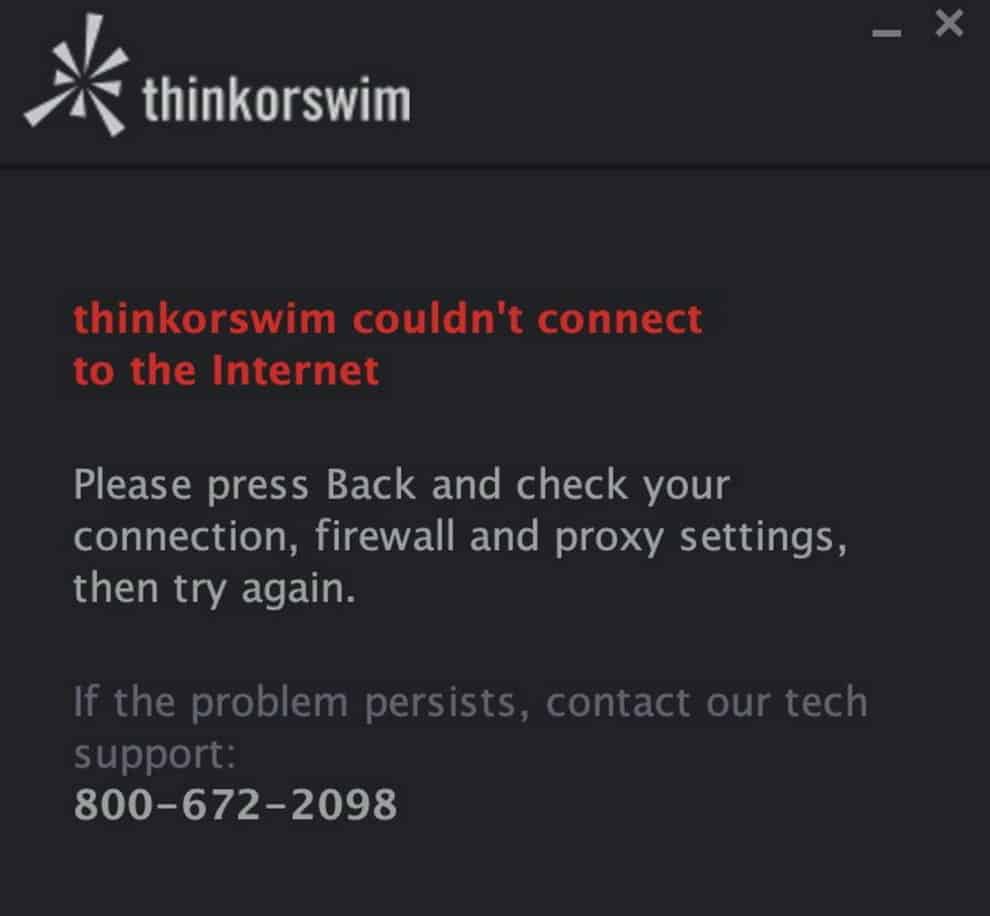 TD Ameritrade’s free trading platform Thinkorswim is down and not working for a large number of users. Hundreds of people have taken to Twitter to complain that the service is stuck on installing update. Thinkorswim has confirmed in a tweet that it was going to update the service over the weekend. As a result, the launch could take longer than expected.

Replying to Insider Paper’s tweet, one affected user said that Thinkorswim went down at 6:15 AM Pacific Time on August 17. Another user said he restarted his computer five times, hoping it would fix the ‘installing update’ problem. The alerts were also not working.

The problem appears to be affecting both desktop and smartphone versions of the platform. Twitter user Tim Moore said the service worked just fine on his iPhone, but Thinkorswim was not working on his Mac. Most other users encountered the problem on both smartphone and desktop.

Twitter user GaslightCapital told Insider Paper that they managed to get past the updates and landed on the log-in screen. But when they tried to log-in to the service, the platform said it was unable to connect to the Internet. GaslightCapital restarted the software and found themselves back to square one: the ‘installing update’ page.

Those who tried to reach the company’s customer support experienced a frustrating 30 minutes of wait time.

Company working on a fix

Thinkorswim acknowledged that the service was facing issues on desktop. Responding to an affected user, the company asked them to use its mobile app or the web platform until the desktop issues are resolved. Thinkorswim told another user that they could also use the TD Ameritrade mobile app until the problem is resolved.

“Hi! We appreciate your patience as we continue to work diligently to correct the issues today with TOS desktop. You are able to use TOS mobile, the website or TD Ameritrade app to place trades. We sincerely apologize for any inconvenience. ^ PR”

UPDATE 18 Aug, 9:40 AM EST: Reports are coming that thinkorswim by TD Ameritrade is still having issues. It is the second day that the platform is having problems. Users have taken to Twitter to report that the service is not working and still down for them. Let us know in the comments section if you’re facing the issues too.

UPDATE 21 Aug, 9:43: AM EST: It is fourth day and the consistent problems with thinkorswim by TD Ameritrade doesn’t seem to go away. Users yet again report on Twitter that their charts are loading super slow, and even down for some.

Some users even say that they will switch the service as the thinkorswim is not able to fix the persistent issue. However, the official Twitter account of the company says:

Hello, the charts should be up and running if seeing an issue please call or email social@thinkorswim.com

UPDATE 24 Aug, 9:40 AM EST: Seems like TD Ameritrade is unable to fix the persistent issue related to its thinkorswim platform. Yet again today, social media is filled with the complaints of users regarding the platform.

Users once again report about chart loading issues on thinkorswim platform, for some charts are loading slow, while many others say charts are not loading at all for them.

One user complains, “@thinkorswim are you ever going to fix your lagging problems with your platform? I’d gladly pay fees again to get your stuff working again! Get some capable programmers and fix your issues!”