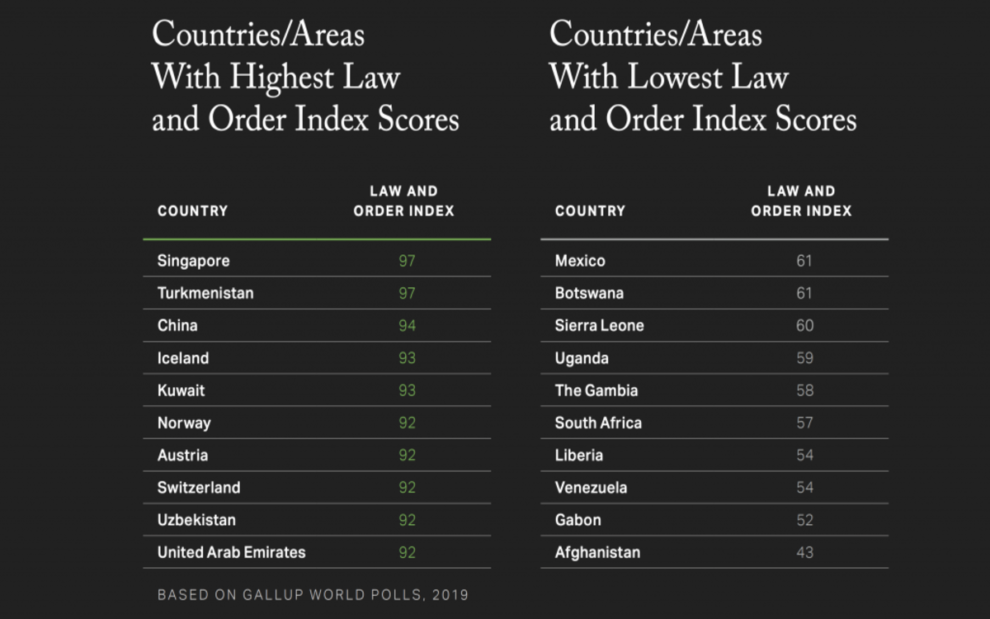 UAE has squeezed itself into the list of the world’s top 10 safest countries to live in. The Gallup’s 2020 Global Law and Order index determines the safest countries by scrutinizing the law and order situation in each state. 144 countries were observed to list out top 10 safest counties in the world to live in. UAE scored a remarkable score of 92 while Singapore made it to the top by securing 97 points. Singapore is known for having the highest happiness index among its people, Singapore topped the list for the past five years.

What are the World’s Top 10 Safest Countries to live in?

Afghanistan attained the lowest ranking. According to the Gallup survey, only 12 percent of Afghans in 2019 confidently said that they felt safe walking alone in the country at night.

The average score of all states was calculated at 82. China has ranked third in the Law and Order Index issued by Gallup this year, it was found that 90 percent of the Chinese residents “feel safe walking alone at night in their area.”Several Chinese residents have reiterated the same opinion. Henry Wang, a Chinese currently residing in New York, said “My friends and I can go out for midnight snacks and drinks or have fun after midnight in many cities in China. But in the US, not just in New York, but also many other major cities, not so many people dare walk alone at night.”

The list also ranked countries on the criteria of how safe people feel living in their countries. It was observed that countries with strong economies had a stronger legal system which directly impacted how safe people felt in a particular country. Gallup posed the following questions to record the security index of each state.

The answers to these questions were recorded via telephonic or in-person interviews. A large sample size of 175,000 people was interviewed, the minimum age for these participants was 15. Some countries drastically dropped in the safety index. Hong Kong’s ranking in the latest index of public perceptions of law and order witnessed a dramatic drop. Last year, Hong Kong attained a score of 91, while in the latest report it fell to 76 which is below average. The law and order situation in Hong Kong primarily fell due to massive anti-government protests carried throughout the state as a result of an extradition bill that was later withdrawn.

Gallup survey each year serves as a reality check for states, many states take the findings seriously in policy decisions to strengthen their rule of law.

List of Top 10 World’s Safest Countries To Live In: