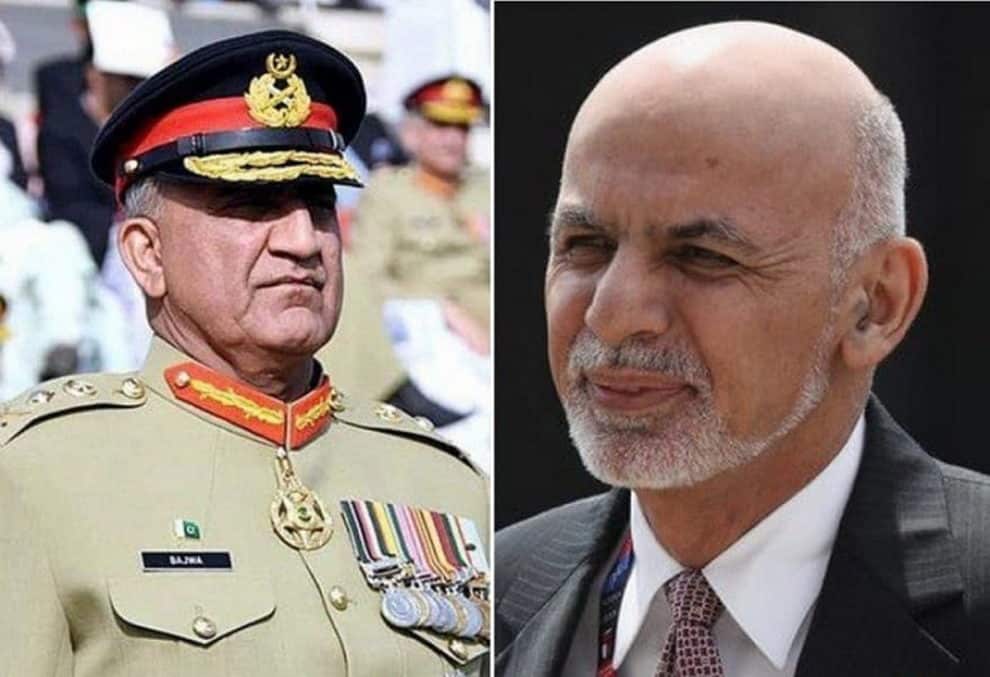 According to ISPR press release: “General Qamar Javed Bajwa, Chief of Army Staff (COAS), held one-on-one meetings with President Ashraf Ghani and Chairman High Council for National Reconciliation of Afghanistan, Dr. Abdullah Abdullah during his visit to Kabul on Tuesday 09 June 2020. COAS was accompanied by PM’s Special Representative for Afghanistan Affairs, Ambassador Mohammad Sadiq. Both sides discussed current developments in the Afghan Peace Process and the necessary steps to be undertaken to facilitate an Afghan-led and Afghan-owned peace process. Issues related to the facilitation of trade and connectivity also came under discussion. Both sides agreed that a dignified and time-bound return of Afghan Refugees from Pakistan is key to normalcy. President Ashraf Ghani expressed his appreciation for the Prime Minister of Pakistan for the opening of the Torkham and Chaman border for allowing Afghan transit goods and facilitating stranded Afghans to return to Afghanistan by land and air routes. The President was also appreciative of the role being played by Pakistan for Afghan Peace Process.”

Afghanistan is been embroiled in a war for the last four decades since the invasion of the former USSR on 25 December 1979. Either it was a war against the USSR invasion, or internal power struggle, or US-backed War on Terror, the people of Afghanistan have been suffering for four long decades. It is almost four generations (grandfather, father, self, and son) who are suffering from the imposed war. Explosives dropped on Afghanistan are much more than the total explosives used in World War I & II. It has not only killed millions of people but injured much more. It devastated the whole country, damaged their agriculture, trade, industry, environment, and routine life.

Several peace Initiatives were taken in the recent past, like the Moscow initiatives, China-Pakistan-Afghanistan trilateral talks, and others. However, the most important is the Doha Talks, which are direct negotiations between the US and the Taliban.

After fighting in Afghanistan for almost two decades, using the latest technologies, lethal weapons, high-tech and advanced weapons, most modern tactics, and highly trained forces, the US realized that they cannot win in Afghanistan. President Trump has decided to pull its troops out from Afghanistan, and it should be before the November election in the US, so that he may get credit and be re-elected as President for another term from 2020-2024. President Trump seems serious and committed to withdrawing its troops.

Although there are several setbacks and issues in the last few months, the seriousness of President Trump is still visible. The major hurdles are classified as Internal as well as external. Internal issues are complex in nature as the Afghan society is tribal, and internal differences are huge and very complicated. However, the major resistance is seen from the sitting government as they do not see any role in the future political outcome in Afghanistan. It is either the government of Hamid Karzai or Dr. Ashraf Ghani; both were installed by the US and working under US directives and serving as facilitators to the US only. They do not have any roots in the Afghan society and no backing of the Afghan people. They were fighting against the Taliban and involved in the killing of millions of Afghans, so they are scared of their future and their resistance is not beyond understanding. The external resistance is from India and Israel, as both of them were exploiting unstable Afghanistan in their own interests. There is sufficient evidence that they were harming Pakistan from Afghanistan. Especially, India maintains numerous unnecessary consulates along the Pak-Afghan border to promote cross border terrorism and sabotage inside Pakistan.

Pakistan’s sufferings in the Afghanistan war

Pakistan was a victim of the Afghan War and suffered a lot in the last four decades. Pakistan sacrificed almost 80,000 precious lives and outnumbered injuries. The compound loss to the economy is estimated to be $250 billion, in addition to the deterioration of society, gun culture, drug culture, and extremism & intolerance. A burden of around 5 million refugees (peak time) has also had an immeasurable impact.

Pakistan’s economy before the Afghan War in the 1950s, 1960s, and 1970s was one of the leading economies in this region. The GDP growth and all economic indicators were positive and growing consecutively. If Pakistan had sustained the same momentum, today’s Pakistan would be a different one.

Pakistan will be the first country wishing peace in Afghanistan. It is believed that peace is vital not only for Afghanistan or Pakistan but for the whole region. Afghanistan is located on the major trade routes connecting Central Asia, East Asia, and Eurasia with the Arabian Sea at Gwadar, and thenceforth to the rest of the world – Africa, Europe, Middle-East, Far East, etc.

It is Pakistan which brought the Taliban to the negotiating table and played an instrumental role in the Doha Talks. President Trump acknowledges and values it. In fact, the leadership in the US, especially the military leadership, understands the potential of Pakistan. As long as the US was in close alliance with Pakistan, either during the Cold War era or the Afghan War or War on Terror, Pakistan protected the US interests and ensured strategic victory for it. Pakistan may be a comparatively small country, with a poor economy, but it is one of the most resilient nations, a brave, sincere, and geostrategic country. Pakistan’s role was decisive in geopolitics.

US wanted to replace Pakistan with India in Afghanistan but failed

Since the US kept a distance from Pakistan and tilted toward India, it has been facing failure one after another. The US wanted to replace India with Pakistan in Afghanistan and failed completely. Maybe the US is supporting India out of the way politically, diplomatically, economically, or militarily with the latest technologies, including lethal & advanced weapons, to counter-China, contain China, or contest China. However, India has no intention nor capability to face China, having contrarily utilized all its gained potential from the US to counter Pakistan.

The US must take notice of the utilization of its assistance extended to India and limit its misuse. The US may ensure its support should not be used against Pakistan. Pakistan has no objection if the US wants to promote its relations with India, but it must ensure that it is not aimed against Pakistan. In the same way, the US should not have any objection to China-Pakistan relations. The US may decide its priorities and let Pakistan decides its own priorities.

At least 20 tornadoes hit southern US