Former President Donald Trump in his new statement on Friday stated, he was the only President in decades who did not push US into any wars. Trump also blasted Woodward over his claims in the book that Former President was planning to go to war with China.

Does anybody really believe that longtime Con Man Bob Woodward, and his lightweight lapdog assistant Robert Costa, are implying in their book of fiction that I was planning to go to war with China, but that one of the dumber generals in the military called the Chinese to tell them that he will inform them if this action proceeds further. Milley may have called, but if so, he should be tried for treason. I never had even a thought of going to war with China, other than the war I was winning, which was on TRADE. To make up stories like this and to sell it to the public is disgraceful. I watched that craggy smug face of Woodward as he “bullshits” the public and said to myself, “I wonder if history will really believe this stuff?” How do you get your reputation back? I was the only President in decades to not get us into a war, I got us out of wars!

Our Country has been taken over by Scammers and Hoaxsters, and we have to take it back. Just like the Russia, Russia, Russia Scam has now been totally debunked and discredited as a FAKE Democrat/Crooked Hillary Plot, the “go to war with China” story is even more ridiculous. It’s incredible that someone is even allowed to write this stuff. We no longer talk about greatness for our Country, everything is about political investigations, hoaxes, and scams. We will Make America Great Again! 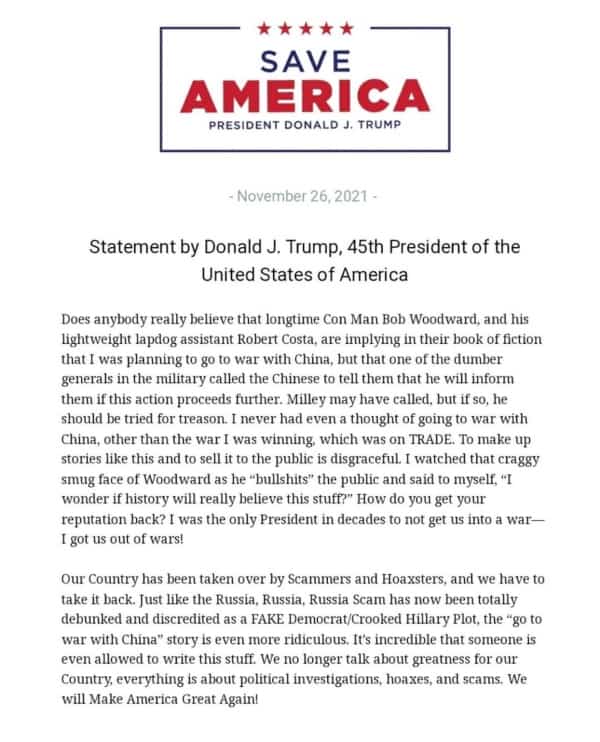