With over $2.5 billion in gaming revenue as of 2021, it’s safe to say that Ubisoft is one of the biggest video game companies in the world. Founded in 1986 in Montreuil, Ile-de-France, France, this studio has released tons of amazing video games over the years. Some of its most popular games are Far Cry 6, Assassin’s Creed, Tom Clancy’s Rainbow Six Siege, For Honor, and Wildlands. Unlike before, Ubisoft has an app (Ubisoft Connect) that enables players to access any of its titles in a single place. For you to launch a game, you need to log into Ubisoft Connect as well as the platform on which you purchased the game. Recently, Ubisoft also made it compulsory for players to use 2FA to play ranked games in Rainbow Six Siege. Unfortunately, users are now experiencing an issue while performing the Ubisoft account 2-step verification process.

As earlier mentioned, Ubisoft recently made it compulsory for its players to use 2 Factor Authentication with their phone numbers. The company added that 2FA will be a prerequisite for any player looking to play ranked games in Rainbow Six Siege.

Unfortunately, according to the latest reports across social media platforms, users now experience an issue when trying to perform the Ubisoft account 2-step verification process. When trying to add their phone number to Ubisoft’s 2FA, some affected players mentioned they get an error message which says:

“This phone number cannot be associated with your account. Please use another one.”

That’s not all; here’s another error message that some other affected users get below:

“This phone number does not respect Ubisoft security standards. Please try to add a different phone number or contact us for further assistance.”

Let’s quickly look at what the users are saying regarding the Ubisoft account 2-step verification issue below:

According to Jpoo_, the Ubisoft user mentioned that he has been trying to add his phone number to 2FA for the past 1 year. Adding to that, the user also reported that he tried linking several other numbers but didn’t achieve any success.

You can also check here (1,2,3) for more complaints regarding the Ubisoft account 2-step verification issue. 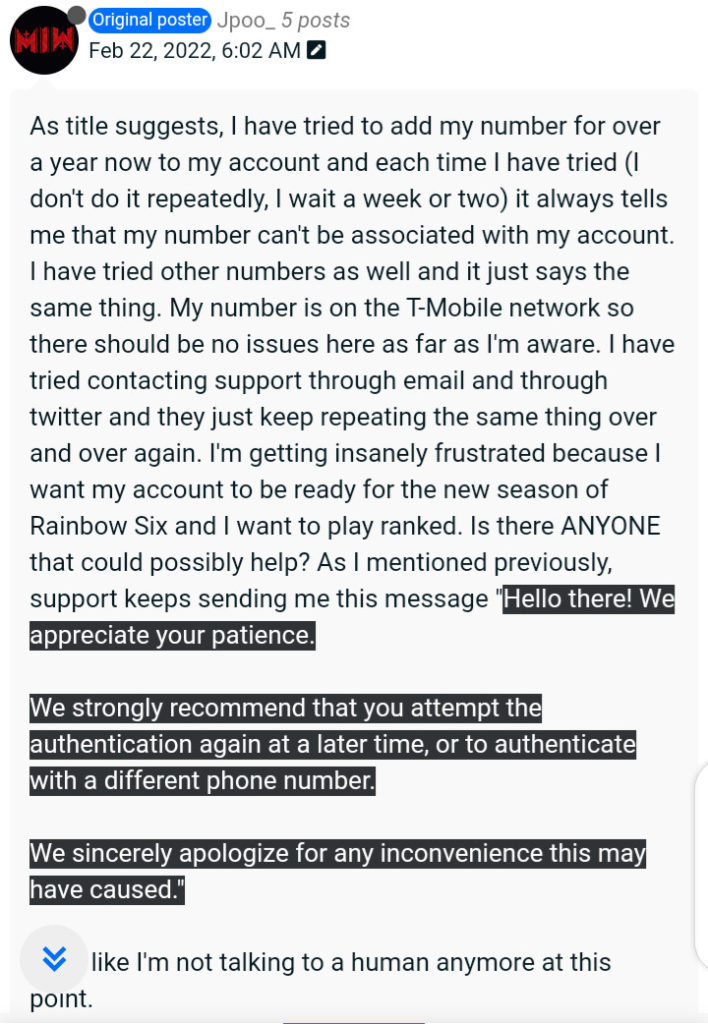 For now, there’s no official fix yet regarding the annoying Ubisoft account 2-step verification issue. Having gone through various reports, we found that this issue has been around since October 2021. Interestingly, Ubisoft has acknowledged the issue, as seen in this post.

Furthermore, Ubisoft also created a live chat for affected users. The purpose of that is to better understand the cause of the issue and address the issue. Hopefully, with this method, Ubisoft will soon understand the cause of the issue and roll out a fix for it. We’ll continue to monitor the company for you. As soon as we find anything worth sharing, we’ll keep you updated here.