T-Mobile, Verizon, Sprint, and AT&T are unarguably the top cell phone carriers in the United States. These phone providers have been around for quite some time now. For instance, AT&T has been in the business since 1983. This company has proven itself over the years to be reliable. Recently, in a way to improve its mobile network and further invest in 5G, AT&T took a step to shut down its 3G networks. However, according to the latest reports, it seems the new move currently affects some people. That’s so because unlocked Samsung Galaxy phones users are now complaining they’re unable to make or receive calls on AT&T.

The move to shut down the AT&T 3G network in the United States started in February 2022. Today, many zones in the country no longer have the 3G network. The shutting down process comes with a couple of benefits for the users. However, it also comes with an issue, which is specifically affecting Samsung users.

The latest reports across various social media platforms reveal that unlocked Samsung Galaxy phones users cannot make VoLTE/HD calls on AT&T. You can check here (1,2,3,4) to see some reports about the issue. The exact cause of this issue is still unknown. However, according to some reports, affected devices work with another sim for about 10 minutes before misbehaving.

What causes the issue?

AT&T recently released the list of unlocked or BYOD devices, which its network now supports. You can check here to have a look at it. According to affected users, their devices are on the list but still couldn’t use the AT&T network. Here’s what Vtbeerloverguy said regarding the issue below: 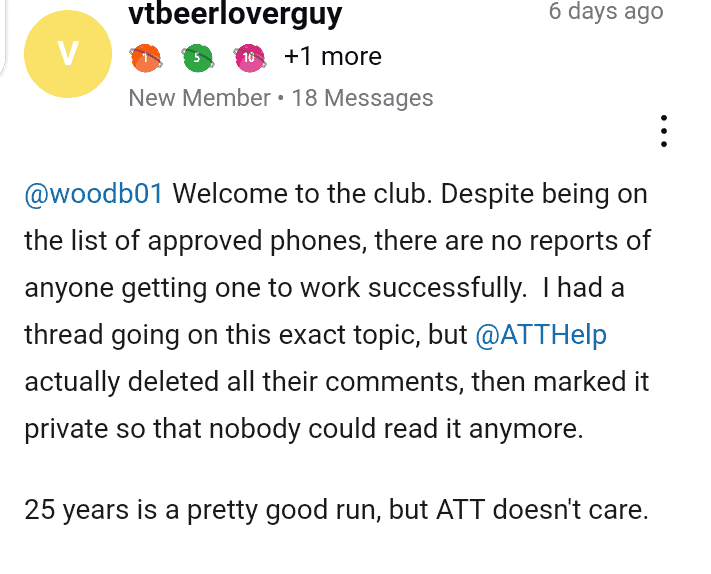 The exact cause of this issue is still unclear, as previously stated. However, we think the problem has a lot to do with the support level of the affected devices. For instance, the unlocked Samsung Galaxy S10 is one of the affected phones, which couldn’t make or receive VoLTE/HD calls on AT&T. The Galaxy S10 smartphone has the model number G973U1. On the unlocked or BYOD devices list above, AT&T specified that the phone only supports HD Voice. With that, it means the issue here is related to the support level for the device.

However, for other affected phones that support VoLTE/HD/Wi-Fi Calling, it’s possible they are yet to get properly provisioned to support the AT&T network. So, the issue here will only be available for a short while.

For now, there’s no official fix yet to address the situation, where unlocked Samsung Galaxy phones cannot make or receive calls on AT&T. However, it seems the AT&T team is already aware of the issue and working on providing a fix to resolve it, according to this post.

We’ll continue to monitor AT&T for updates regarding the issue. As soon as we find anything worth sharing, you’ll be the first to know about it.