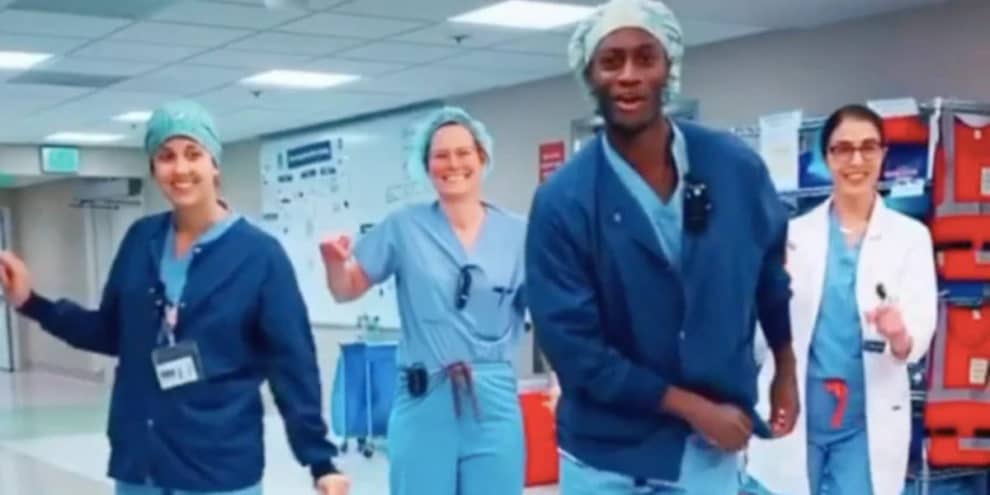 Surely, we can’t thank all the healthcare practitioners across the world enough for their selfless effort towards the fight of COVID-19 Pandemic. Ever since the outbreak of the virus, they’ve been very active and working tirelessly to ensure the world returns to normal. However, amidst all of that, videos of US doctors and nurses dancing on TikTok have been seen making waves across different social media platforms.

A video, posted on Social Media platforms, and produced on the TikTok app, featured Dr. Jason Campbell, and a few of his colleagues. While most people, including healthcare workers, see it as the right medicine during this pandemic period, some see it as unnecessary.

Dr. Jason Campbell is a 31-year-old Anaesthesia resident doctor at the Oregon Health & Science University Hospital. In an interview, he told AFP that he’s overwhelmed by the positive response coming from people, especially from healthcare staff across the country. Following the release of the video, a lot of other US doctors and nurses have started following suits and posting videos of them dancing on TikTok as a challenge. The truth is long hours of monitoring Coronavirus testing hospitals itself can have negative effects on healthcare workers. So, there’s no bad joining the challenge if it can help lighten up and take some pressure off them.

Like I said earlier, while a lot of people have lauded the actions of the US doctors and nurses that are dancing on TikTok, a few are against it. Some of them said it’s insensitive at this period to make videos. Others even go as far as saying it’s against the ethical codes of doctors to do something like that.

Let’s have a quick look at what people are saying on Twitter:

Also, according to Serenisima, he said they should be fired. Like for real? Check out the tweet below:

Frankly, everybody, including you and me, has a right to their opinions. I can personally say there’s nothing bad in seeing US doctors and nurses dancing on TikTok to motivate themselves,  especially since it’s going to help them take a lot of pressure off their shoulders during this pandemic period.

US Doctors and Nurses dancing video:

This one is from Wuhan, China: