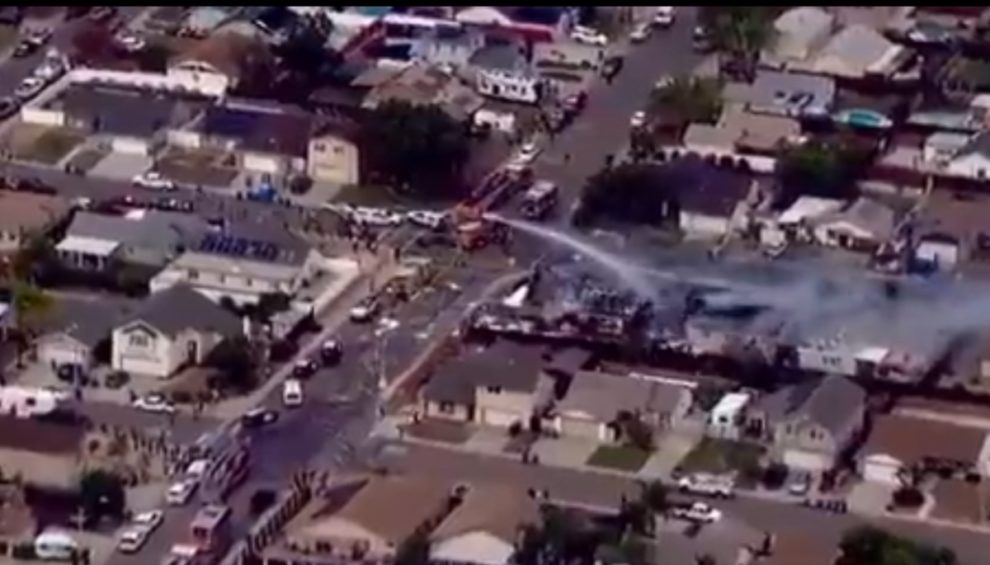 Video shows a small plane has crashed near Santana High School in Santee, California. Sheriff says to stay away from 9900 block of North Magnolia Ave.

Initial reports indicate the plane hit a UPS truck, killing the driver; two homes are on fire; reports of human remains found in a backyard.

PLANE CRASHED ON HOMES IN SANTEE

A plane crashed in a Santee neighbourhood Monday afternoon, destroying two homes and damaging a third, with the extent of injuries unknown.

According to officials, a Cessna 340A crashed in Santee, was coming from Yuma, Arizona and was headed to Montgomery-Gibbs Executive Airport in San Diego.

First responders from the Santee Fire Department and the San Diego Sheriff’s Department were dispatched to the scene.

The Santee Fire Department reported that two people were taken from the scene after the plane crashed near the 9900 block of North Magnolia Avenue. According to scanner traffic, the first reports of the crash came in around 12:15 p.m., and officials were diverting traffic near Mast and Magnolia.

Fire engines were seen on video dousing two homes that had been destroyed in the plane crash. According to Heartland Fire & Rescue, a third home was damaged, and hazmat was on its way to the scene.

“A temporary evacuation point has been set up by @SoCal_RedCross at the Cameron Family YMCA located at 10123 Riverwalk Drive, Santee. This is for people who have been affected by a plane crash near Greencastle and Jeremy Streets in @CityofSantee. Thank you for your cooperation,” San Diego Sheriff tweeted.

Santana High School, which is about 2-3 blocks away from the crash, said on Twitter that all students were “safe.”

VIDEO OF THE PLANE CRASH IN SANTEE, CALIFORNIA

Witnesses report the plane was listing from wingtip to wingtip before crashing. Several homes are destroyed and several casualties are being reported. pic.twitter.com/IDzAK7JCCv

🇺🇸 — DEVELOPING: A Plane Crashed Into Multiple Homes And Vehicles In Santee, California. A Nearby High School Is On Lockdown As First Responders Put Out The Fire. Injuries Reported.