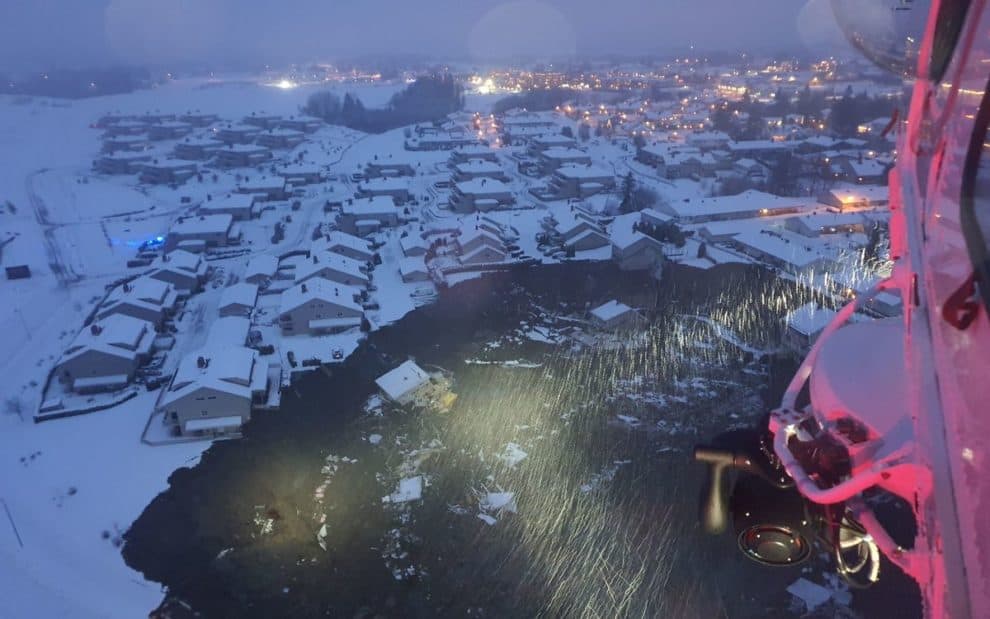 A quick clay landslide disaster has occurred at Gjerdrum in Norway this morning. Hundreds of people are homeless after a landslide has destroyed an entire living area on the outskirts of Oslo.

According to reports, 10 injured, 20 missing and some 500 people evacuated, several houses buried as a landslide hits Norway’s Gjerdrum village.

Norwegian Prime Minister Erna Solberg wrote on social media: “It hurts to see how the forces of nature have ravaged Gjerdrum. My thoughts go to everyone affected by the landslide.”

UPDATE: As per the latest reports, the evacuation order in Gjerdrum, Norway will be extended as the area is deemed ‘unsafe’. Per assessments, this will lead to a total of 1500 people having to evacuate.

Full video of a landslide in Gjerdrum, Norway

Several people are injured, and many are missing after the landslide that happened early Wednesday morning. This video (full version of the video embedded above) shows a house crashing on the spot and a helicopter searching the area.

A landslide in a Norwegian village has injured 10 people, left 21 unaccounted for and buried houses under what looks like a huge slick of mud in a gully.

One more video of the natural disaster in Gjerdrum, Norway

A massive #landslide has hit the Norwegian municipality of #Gjerdrum sparking mass evacuation. It's believed heavy precipitation may have made the soil unstable. ❄️Heavy snow is expected to ease in the area this evening. #Norway pic.twitter.com/EZT6rFah3N