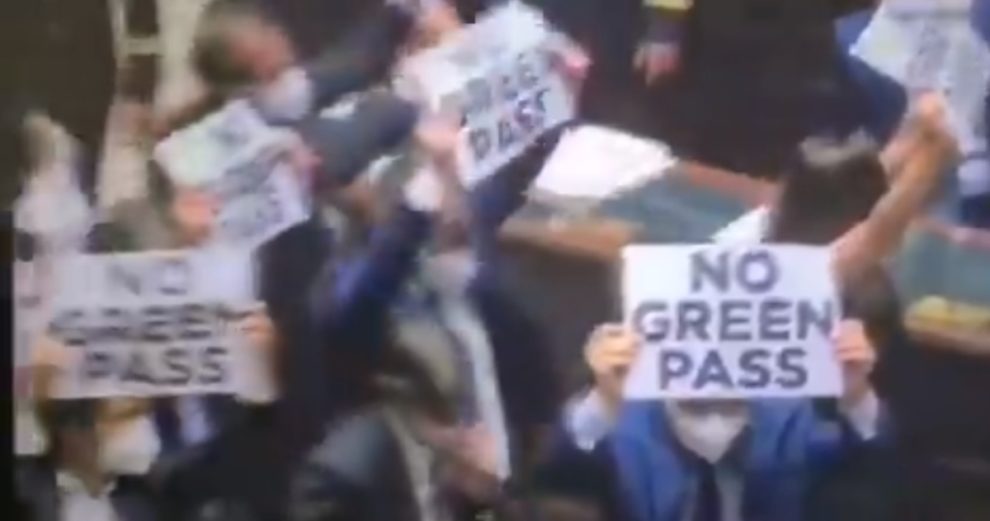 The Italian Chamber of Deputies, the lower house of the bicameral Parliament of Italy, was thrown into chaos over plans to introduce domestic vaccine passports or “Green Pass”, with members holding up protest signs that read “no green pass.”

A video clip shows one member being pursued by security as he tries to hold the sign aloft before fleeing the chamber.

However, he is followed by a swarm of other members holding the same sign, who then enter the room.

Some deputies of the Brothers of Italy party, opposed to the provision, displayed signs with the words ‘no green pass’ inside the hemicycle. The members of the Democratic Party responded by shouting “shame, shame”.

The so-called Green Pass is a digital or paper certificate that shows if a person has received at least one vaccination, tested negative, or has recently recovered from COVID-19.

This same pass will also be required for anyone wishing to enter restaurants, bars, or pastry shops, as per SchengenVisaInfo.

Tourists entering the country will also be required to obtain a green pass.

The introduction of the rules was justified by Italian Prime Minister Mario Draghi citing the spread of the delta variant.

“The Delta variant is threatening. It spreads much more quickly than other variants. I invite all Italians to get vaccinated and to do so straight away. Without vaccinations, we’d have to close everything again,” Draghi said.

The Italians have been vehemently opposing the bill, with people staging protests in different cities of Italy.

Italy has decided to restrict all unvaccinated people who do not have the country’s ‘Green Pass,’ which is an extension of the EU Digital COVID-19 Certificate.

According to the National Tourism Agency of Italy, beginning August 6, anyone over the age of 12 must present a health pass to gain access to certain activities and services.

More videos of protest over Green pass from Italian cities:

Rome protests tonight against Italy’s #GreenPass which from Aug. 6 bans entry to stadiums, museums, theatres, cinemas, swimming pools, gyms, and indoor restaurants except for those who’ve either had at least one jab, negative test within 48 hrs, or recently recovered from #COVID pic.twitter.com/UPuotdDVtv

Italy to introduce mandatory Covid vaccination for over 50s: govt