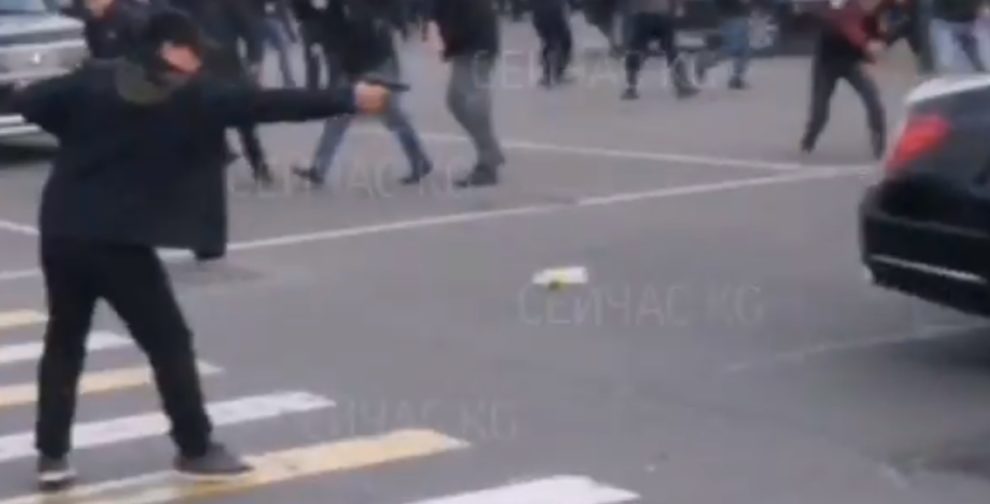 A video surfacing on social media shows a shooting by unknown men on ex-President of Kyrgyzstan Almazbek Atambayev car. Kyrgyzstan’s President declared a state of emergency in wake of these violent protests.  This state of emergency is intended to end the political turmoil sparked by the disputed parliamentary election. Unknown people shot at Almazbek Atambayev’s car.

The video below shows a shooting on the car of Krygztan’s ex-President, Atambayev.

President Jeenbekov was subjected to several calls that urged him to step down.  Hundreds of protesters who struggled their way into government buildings the night after Sunday’s parliamentary vote was reportedly pushed under the rug by pro-government parties. The protestors were also successful in freeing former President Almazbek Atambayev. Ex-President Atambayev was sentenced to serve 11 years in prison in June on charges of corruption. The charges also included abuse of office that he and his supporters described as a political vendetta and enmity against Jeenbekov.

The law and order situation in Kyrgyzstan continues to get worse. A user tweeted, “Things are taking a u-turn in #Kyrgyzstan, -Shootings were heard, -Tilek Toktogaziev, a politician nominated for PM injured -Atambaev’s bodyguard seriously hurt, -Pres. Jeenbekov is seen meeting Army chief, among others, the agenda includes possible curfew.” The condition of Krygzstan is apparent from this video showing a shooting on the ex-president Atambayev’s car.

The chaos and political tension mark the third time in 15 years when protesters have collectively aimed to topple a government in Kyrgyzstan. These clashes are similar to the uprisings that ousted Kyrgyz presidents in 2005 and 2010. The recent protests are driven by clan rivalries, such rivalries play a central role in in the Central Asian nation’s politics.

After an initial attempt to stop the protesters immediately after the vote was conducted, police have now pulled back. The police are refraining from intervening in the demonstrations since this can result in a greater degree of violence. It still remains unclear whether the police and the military will side with Jeenbekov’s orders or operate otherwise.

Due to massive pressure from protesters, the Central Election Commission announced that it will overturn the parliamentary vote results. This allowed the protest leaders to quickly plan to form a new government. Amidst this suspension of law and order, an emergency parliamentary session conducted on Tuesday nominated lawmaker Sadyr Zhaparov as a new prime minister. However, this decision was immediately contested by other protest groups, further driving the country into chaos.

This recent video showing shooting on Kyrgyzstan’s ex-President Atambayev’s car coupled with ongoing chaos and protests only deems it necessary that military takeover. The state of emergency is likely to restore the law and order situation in the country.