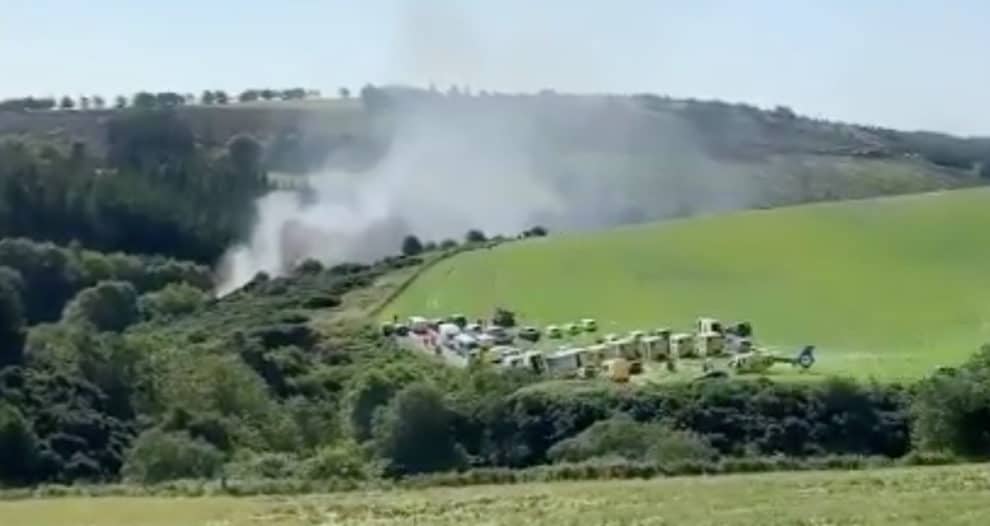 According to the latest report, a train derailed in Aberdeenshire, Scotland, has been captured on video. The horrible incident happened when the train went off tracks on the Dundee-Aberdeen railway line, this morning.

At around 09:40 am today, reports confirmed that a train derailed near Stonehaven, Aberdeenshire, in Scotland. So far, more than 30 emergency service vehicles are already at the scene of the incident. Apart from that, there are also two air ambulances, fire crews, and coastguards, according to reports.

According to a statement by the British Transport Police, the department said, its officers came to the scene at 09.43 am. Also, it added that the officers, together with paramedics and the fire brigade, remained at the scene.

Looking at the video, which shows the derailed train incident in Aberdeenshire, Scotland, you’ll see thick smoke coming from the scene of the incident.

According to Network Rail Scotland, they are working alongside the emergency services to respond to the derailed train incident near Stonehaven, in Aberdeenshire, Scotland.

Furthermore, according to what a source said: “It is too early to confirm the exact nature and severity of the incident and more details will be made available once known.”

As such, it’s still unclear whether or not there are injuries, as a result of the incident. Earlier today, thunderstorms caused flooding across many parts of central and eastern Scotland, including Aberdeenshire. That also resulted in the shutting of some schools and the cancellation of rail services.

What Are The Facts Behind The Incident?

Shortly after the incident of the derailed train, in Aberdeenshire, Scotland, Mick Lynch said, the national union is aware of the incident. In case you don’t know, Lynch is the assistant general secretary of the Rail, Maritime, and Transport (RMT) union.

Here’s a brief of what the general secretary said about the derailed train incident in Aberdeenshire, Scotland:

“RMT is aware of the major incident at Stonehaven. And our reps are already liaising directly at the senior level, with both Scotrail and Network Rail. Our priority at this time is to support our members, their colleagues, and their families. Also, it’s to do all we can to assist the rescue operation, which RMT members are currently a part of.”

Furthermore, Lynch mentioned that the Union will reveal “the facts behind the incident in due course”. However, that’ll be after they provide the necessary assistance and support, to the people affected by the incident.

UPDATE: The driver of a train which derailed in Aberdeenshire is believed to have died and there are fears of a second fatality, according to sources.