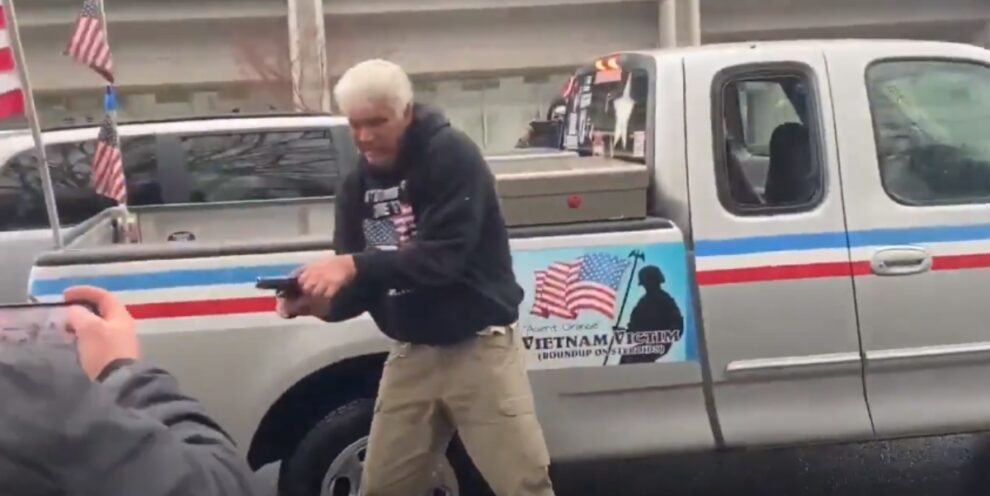 Video of an incident emerged wherein a Trump supporter pulled a gun on Antifa protesters after they damaged his truck during a rally near the Oregon Capitol.

The rift happened on Sunday at a rally in Salem near the Oregon Capitol. The man dressed in an American flag hoodie and driving a truck with Trump stickers quarreled with Antifa protesters. They pelted his truck with rocks and paint.

In the Oregon video, the man’s truck windows can be seen smashed due to the clash. The windshield was blurred with yellow paint. But as they started macing him, the man pulled out his gun and pointed it at protesters. He was shouting, ‘Get away from me’.

As police reached the scene, the man threw his gun into the back of his truck, put his hands up, and surrendered to the police. He was seen rubbing his eyes as the cops arrived to arrest him.

The Antifa protesters were laughing and shouting as the man was taken into custody. However, according to the police, the man did not face any charges and was still under investigation.

Rifts between left-wing and right-wing protesters

This incident was one of many rifts between left-wing, anti-fascist demonstrators and right-wing protesters near the Oregon State Capitol.

Protesters clashed throughout the day on a supposedly “Freedom Rally” in honor of those who “fought for our freedoms.” Salem police advised in a tweet to avoid traveling through the streets nearby the capitol mall.

“The risk of violence has increased as the opposing protestors are expected to arrive in large numbers. We have received reports that vehicles driving past the capitol are being struck with balloons filled with paint and green lasers being pointed at drivers. Anyone observing criminal behavior should immediately move to a safe location & call 911.”