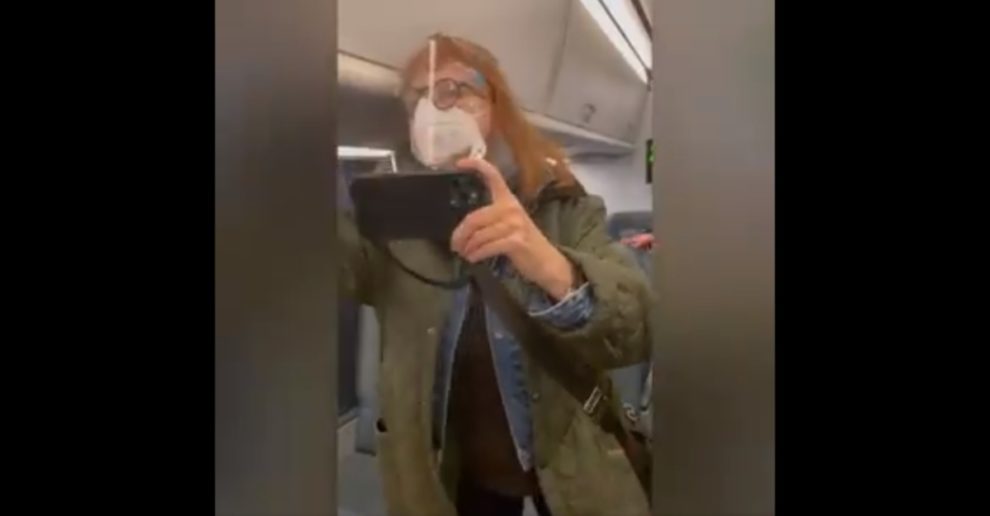 A video has gone viral on social media in which a woman wearing both a face mask and a face shield, told two men drinking coffee on train, she has “70,000 Twitter followers”.

A woman on a train at Pennsylvania Station in New York City confronted two men Tuesday morning for drinking coffee without wearing a mask.

Another woman named Ashley StClair recorded the whole scene and posted the video on social media. StClair exchanged words with the woman harassing the coffee drinking men on the train. Here is what StClair wrote in the video description:

These mask-fanatic women from hell started filming & harassing these men for drinking coffee on the train. The older one said “I have 70,000 Twitter followers” like the men should be scared Rolling on the floor laughing. People have lost their damn minds. If you’re that scared, DON’T TRAVEL— STAY HOME!

Other passengers on the train told the woman yelling at men to mind her own business, with StClair suggesting that if she was so concerned about catching coronavirus, instead of getting closer to the men, she should actually maintain social-distancing.

Video shows the conductor showed up in the end and asked the woman recording the video to go back to her seat or else he would call the police.

People have lost their damn minds.

This is how the whole thing went

Ashley StClair replied in shock, “You have 70,000 Twitter followers. That means nothing. You’re still being very rude. These men are just drinking coffee. They’re allowed to have their mask off when they’re drinking.

Coffee drinking man: “We were drinking..”

Ashley StClair: “You know what is safer than a mask? SOCIAL DISTANCING. That’s more effective than the mask so why don’t you step back and leave him alone.”

Woman to StClair: “You’re not involved.”

Conductor after listening to the woman, “Would you like me to call the police. If you don’t want any police. Just go back to your seat. If not, I will call the police and let the police handle it.”

According to StClair, after she switched off her video recording, the woman was heard saying, “she cracked her head open chasing Nazis.”

According to StClair, the woman has threatened to sue her. Here’s what she wrote on her Twitter post:

“She’s so angry. She’s talking about suing me, sending it to her contacts, how disgusting I am. For filming her after she harassed a man… …For drinking coffee. Such gross & classless behavior!”

UPDATE: The woman recording the video, identified as Huffington Post’s contributor Sandi Bachom, discuss the incident on her Twitter post:

“On the train there are some maskless MAGA’s in our seats. I take out my camera and start filming and this right wing blogger w/ a Trump Won mask starts filming too. Next thing I know she posts the video on IG and Twitter to300k followers calling me crazy mask lady. YOUR GUY LOST”

Apparently this chick got fired from her job for posing with white nationalists. This is my surprised face. Pure evil