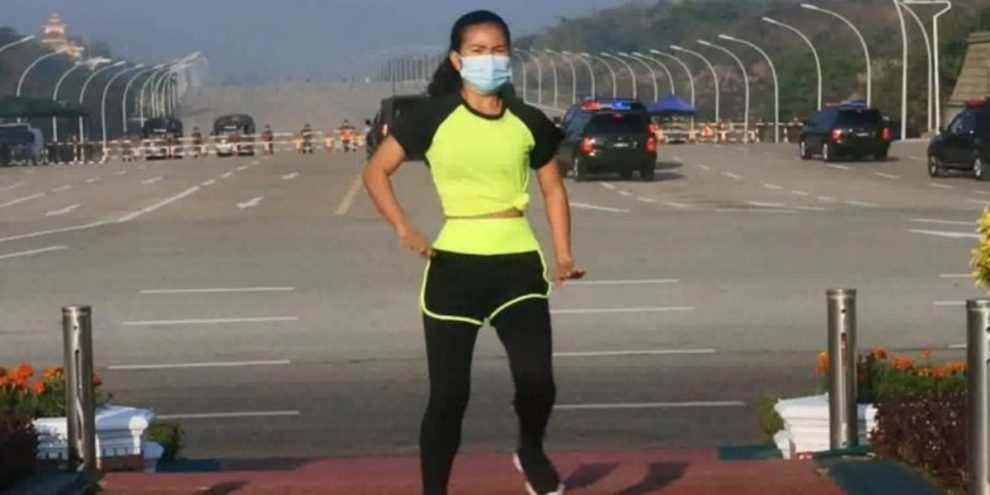 A woman video recorded her aerobics class without realizing that a military coup was taking place right behind her in Myanmar.

A woman named Khing Hnin Wai went viral after a video of her doing ‘aerobics dance workout’ was shared thousands of times on social media platforms. The video was recorded in front of the fence that the army of Myanmar placed after the recent military coup in the country.

Hnin Wai, according to her Facebook profile’s bio, is a Physical Education Teacher, who works for the Ministry of Education of Burma.

The video has gone viral on different social media platforms and has so far gained more than 27 thousand reactions on her Facebook profile alone.

Several users on social media questioned the authenticity of the video. Some users claimed it was shot with a Croma background (green background) as the woman’s shadow in the video is not appearing on the street just behind her.

“Why does this feel like a setup video to me? It’s such a weird place to shoot a fitness video, the background’s only good if there’s no cars, otherwise it’s much too busy & would never be chosen as a shoot location. Unless…it was chosen on purpose to have video of the coup?” one user wrote.

Some users asked, why the woman wore the mask during the aerobics exercise – that too when there was no one around her.

We are not certain if it’s a fake (edited) or real video, but according to her Facebook profile, she often posts her aerobics videos, that are publicly available to watch at the same location.

Just a few moments back, Khing Hnin Wai has posted multiple videos of the same location and wrote a long message under its description (translated by Insider Paper):

“If one is white, all are white. If one vote, all vote. It is for the Burmese people who follow everyone when one person insults them. Your friends in Acc already know you are in for a race. I wrote various captions without knowing anything. Intended for existing Acc owners. I did not go to any organization with the intention of making fun of them. I did not go to dance because I wanted to be a celeb. Below are the videos
In the morning, I usually go to bed as soon as I get up. Nay Pyi Taw has always been an adult route, so I thought it was normal and continued. I did not expect this to happen. Some of the security guards on duty are already friends. Please don’t upload captions for this morning video file, I’m sorry to hear you insulted me for being so quiet and self-employed.”

The Burmese army attempted a coup after years of shared power between the civil government of Aung San Suu Kyi and the military.

Myanmar’s army declared a state of emergency for a year and placed generals in key positions.

Video of the woman doing aerobics dance workout during coup: