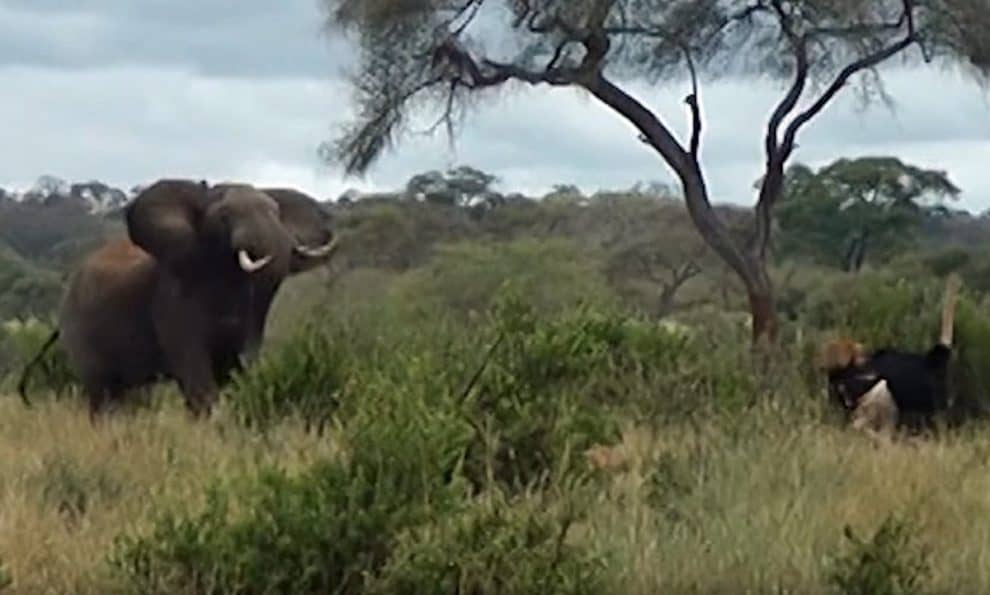 A viral video making rounds on social media shows an elephant breaking apart the fighting pair of ostriches. Elephants are among the most majestic and resilient beats in the jungle. Research indicates that elephants are exceptionally smart creatures. They have the largest brain of any land animal and three times as many neurons as possessed by humans. Elephants have illustrated impressive mental capabilities time and time again.

The mighty elephant is seen walking peacefully until a pair of bickering feathery ostriches catches his attention. He then proceeds towards them slowly in a manner that does not constitute a threat or hostility, the ostriches seem oblivious to the elephant drawing near. The ostriches seem busy fighting and kicking each other. At this point, the person making the video is asked, “are they fighting or are they playing?” The person filming the video says that the ostriches are fighting each other even though it seems like they are engaged in a playful activity.

The ostriches seem confused at the elephant drawing near. The elephant is then seen trumpeting at ostriches to break them apart. This is when the ostriches attention is diverted away from the fight and they break into a run. The ostriches are seen running toward the elephant as if they are charging at him for breaking them apart, but they change their path and hide in the bushes.

Elephants: The most empathetic animal in the jungle

The elephants display of empathy and care towards ostriches is also explained by previous studies conducted on the behavior of elephants. A study conducted in recent years [PDF] shows glimpses of Asian elephants comforting one another when distressed. The elephants in the study used both physical contact and vocal sounds as forms of comfort, stroking one another with their trunks and emitting small chirps. The study concluded this behavior is “best classified with similar consolation responses by apes, possibly based on convergent evolution of empathic capacities.”

Elephants are also popularly known for their strong memories. Elephants are able to memorize routes to watering holes over incredibly long stretches of time and space. This is important for the well being of elephants that live in the desert where water is scarce. Research also shows that elephants often form close bonds with companions, and can recognize them even after long periods of separation. Dr. Shermin de Silva, now director of the Uda Walawe Elephant Research Project in Sri Lanka, said in 2011 that “Elephants are able to track one another over large distances by calling to each other and using their sense of smell … Our work shows that they are able to recognize their friends and renew these bonds even after being apart for a long time.”