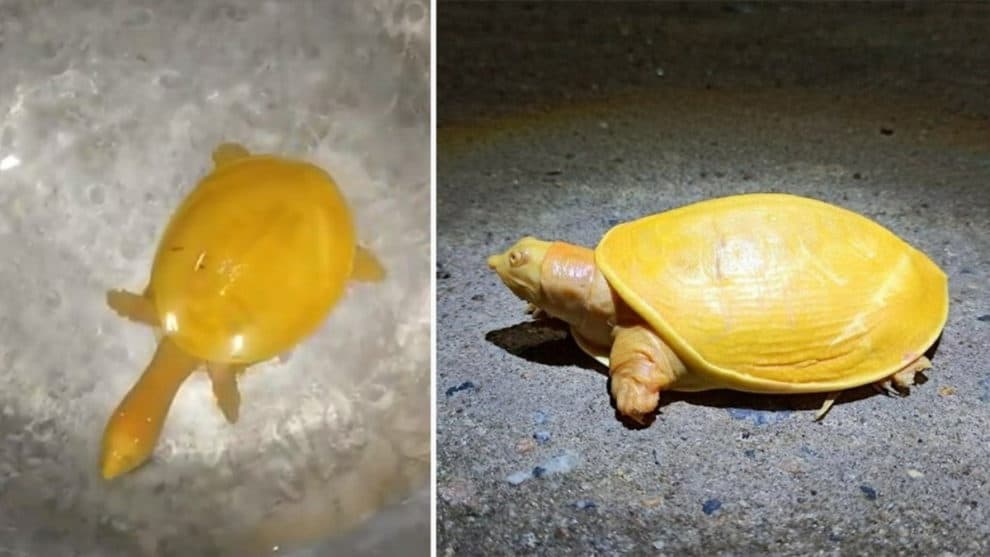 A rare yellow turtle was spotted on Sunday by the local residents in Balasore, a city in Odisha, India. Now, the video of the reptile, which looks different from the usual turtle that we know, has gone viral across various social media platforms, including YouTube. Furthermore, the report mentioned that the yellow turtle has now been handed over to forest officials in India. Also, Wildlife experts suggested that the reptile likely has an albino mutation.

A yellow turtle has been rescued by the local residents in Balasore, Odisha in India. According to reports, the animal has now been handed over to scientists for further study.

So far, the video of the rare creature has now gone viral on the internet, with a few experts suggesting why the reptile is unique. Let’s have a quick look at one of the suggestions below:

According to an Indian Forest Services (IFS) officer Susanta Nanda, he explained that the reptile is “most probably an albino”. He further added that local residents in Sindh also rescued something like that a few years back.

“A rare yellow turtle was spotted & rescued in Balasore, Odisha yesterday. Most probably it was an albino. One such aberration was recorded by locals in Sindh a few years back.”

Furthermore, Nanda was about to support the claim with a picture showing the eyes of the creature. The yellow turtle rescued in India has pink eyes, which is a sign that it’s an albino.

“Close snap of the same. Mark the pink eyes, one indicative feature of albinism.”

While speaking about the rescued creature,  Bhanoomitra Acharya, a Wildlife Warden mentioned that indeed the reptile is a rare one.

Here’s what the Warden said below:

“The whole shell and the body of the rescued turtle is yellow. This is a rare turtle, I have never seen one like this.”

Have a look at the viral video of the yellow turtle below:

Albinism is a type of genetic disorder, which often prevents the skin, eyes, and hair, from having colors. According to the National Organization for Albinism and Hypopigmentation, the genetic disorder is rare but often affects several animals, including mammals and reptiles.

Just like all reptiles, the turtles usually have one pigment present. So, when they suffer from the genetic disorder, it affects their eyes and other parts of their bodies. Talking about the turtle species, albinism mostly affects the Sulcata turtles.

Here is another video of the rare turtle: