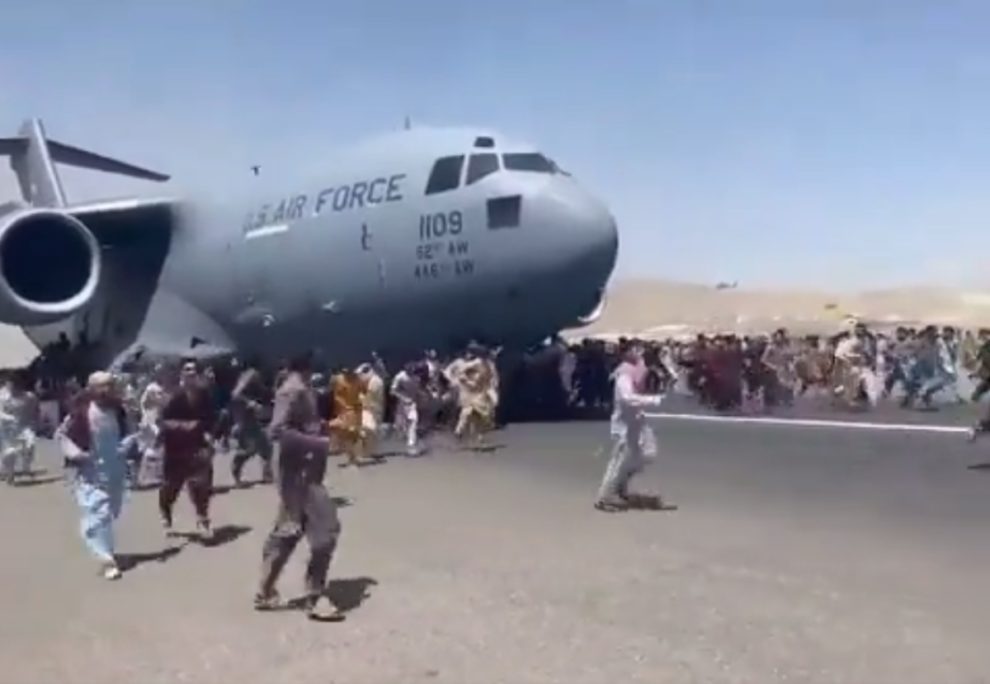 Social media videos show Afghan civilians clinging to the side of a US Air Force plane as it prepares to take off from Kabul’s international airport.

After a military victory, the Taliban has retaken power in Afghanistan for the second time. Afghan President Ashraf Ghani has fled the country, allowing the Taliban to take control.

The world leader stated that he was faced with a “difficult choice” between a “armed Taliban” and “leaving the dear country that I have dedicated my life to protecting for the past 20 years.”

However, this has left thousands of Afghans stranded in the country, unsure of what to do next. As a result, hundreds of people attempted to board planes bound for Kabul. Five of them are said to have died doing the same thing at Kabul Airport.

People trying to escape Kabul by getting into an aircraft somehow
pic.twitter.com/P6oPAsmHrt

Those who were unable to board the plane are resorting to other desperate measures to flee the country. In a video that went viral on social media, desperate Afghans were seen running alongside a US air force plane, hanging onto its wings and clinging to its wheels at Kabul International Airport.

BREAKING: Scenes from #Kabul Airport today as US Air Force plane gets ready to take off on runway pic.twitter.com/Ot7bCpiFNU

According to reports, two people died after hanging on to a plane as it took off from Kabul Airport.

BREAKING 🚨At least 3 people reportedly fall down to their death after holding on to a US Air Force plane as it takes off from Kabul Airport pic.twitter.com/LyA31QUt8r

The statement says that those in power and authority across the country “bear responsibility and accountability for the protection of human life and property, and for the immediate restoration of security and civil order.”

WATCH: (GRAPHIC) Civilians fall from C-17 planes taking off from Kabul; 5 have been killed in the chaos pic.twitter.com/AInM4XE3C0

The video below shows multiple clips of the situation inside and outside Kabul airport:

One of the most iconic and symbolic scenes of our generation. US Air Force *excuses* itself through fleeing (and falling) young Afghans at Kabul’s airport, among other insane scenes pic.twitter.com/KNr81vlnyn