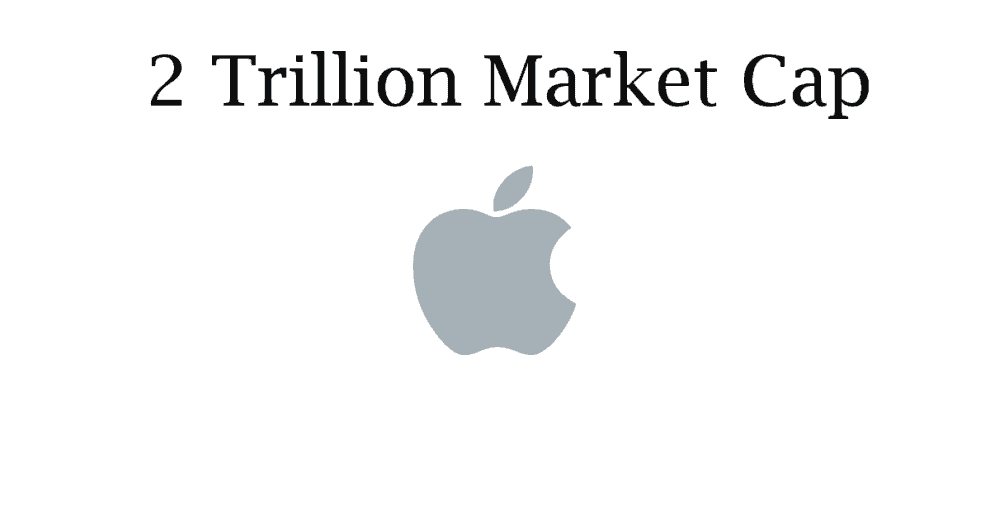 Apple has once again managed to make the headlines. Apple has officially become the first US-based company to reach a striking $2 trillion market cap.

This is huge news in terms of doubling Apple’s evaluation in just a span of two years. Just 2 years ago in 2018, Apple reached a market cap of $1 trillion. This means that Apple has managed to double itself in valuation.

Keeping in mind Apple’s stark record of achievements, it is also noteworthy that Apple is also the first United States based company to manage a $1 trillion market cap, this was just 38 years after the company was publicly launched. After experiencing a setback and falling below the mark just for one day on March 23 amidst the COVID-19 crisis.

Apple has managed to rise higher above with the current AAPL at 1.27%. This is almost double the amount in terms of market capitalization in a period of less than 5 months. Back then, Wall street correctly predicted that Apple will be the first company to cross the $2 trillion benchmark. Moreover, on the fortunate eve of 31 July, Apple crossed the giant state oil corporation, Saudi Aramco in being crowned the world’s most valuable company traded publicly.

For Apple to hit a valuation cap of $2 trillion, it needed to finish off the day at the value of $467.77 or above. This happened on today’s fateful morning when the cap hit $468.09. Amidst the economic collapse worldwide due to COVID-19, Apple has demonstrated immense success. Although it was feared that the company’s sales would go down, Apple has not only managed to stay afloat but it has managed to exceed its sales than ever before. This is primarily because all institutions and offices around the world have shifted to online forums, this resulted in a spike in Mac and iPad sales.

Apple was expected to officially launch its first 5G-enabled smartphone this fall. The management has communicated to the investors that they should expect fewer days of launch this time, compared to the launch that happened last year.

The shares owned by Apple have skyrocketed amidst the continuing investigations into the company’s practices regarding the App Store. Tim Cook, the Chief Executive of Apple appeared before the House of Representatives antitrust hearing this summer. He was subjected to several inquiries regarding Apple’s fee structure set for the App Store. It was claimed that Apple pockets up to 30% of proceeds from sales of all digital goods that are purchased through third-party applications. This was in regards to the apps that users downloaded from the App Store.

Moreover, Apple is also subject to another lawsuit initiated by the developer of Fortnite, Epic Games. Epic Games have alleged that Apple employs monopolistic practices in order to retain a huge cut from digital purchases. This prevents developers from securing purchases from applications using payment mechanisms set by them. This lawsuit has also attracted support from other high-profile developers including Spotify Technology SA.