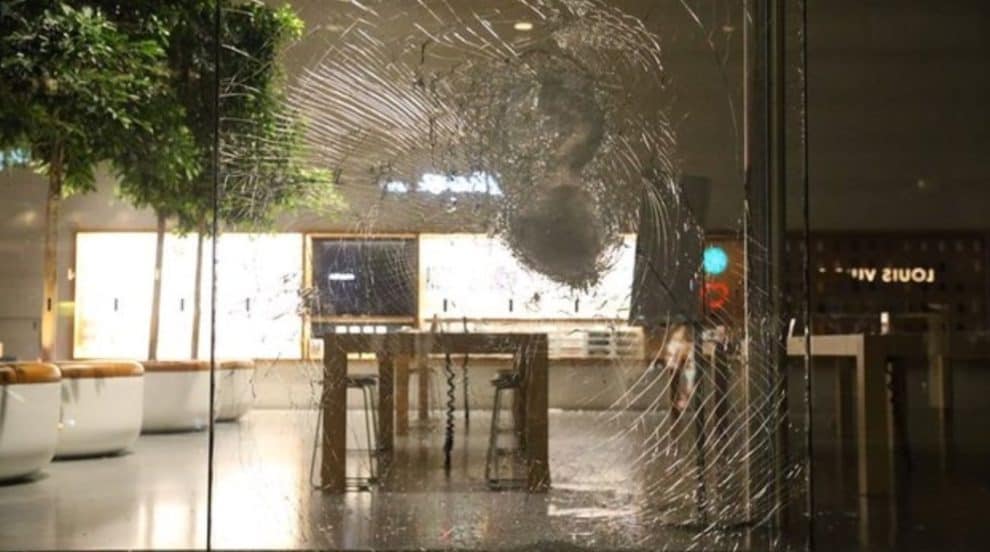 Amid George Floyd protests, reports have it that some Apple stores across the United States were attacked by rioters, with lots of items looted and others damaged. As such, the company has decided to close down many of its retail stores across the country. That is to ensure the safety of its employees and customers.

Looting As A Result Of George Floyd Protests

A few days ago, Apple made an announcement to shut down many of its retail stores in the US. That’s because of the ongoing George Floyd protests that have spread across to several cities in the country. Here’s what Apple said while discussing with 9to5Mac:

“With the health and safety of our teams in mind, we’ve made the decision to keep a number of our stores in the US closed on Sunday.”

Following the death of Floyd, tens of thousands of people have been to the street to protest about the killing. According to the protesters, they are seeking justice for the poor black man, who lost his life while a police officer was trying to arrest him. Also, according to the footage of the incident, which has spread across the Internet, Floyd was pinned down by an officer with his kneel, making him unable to breathe.

So far, there have been flashes of violence across the US – especially Minneapolis, where Floyd died. While some of them involve property damages, some others involve looting businesses across different cities.

One of the stores targeted by these opportunist rioters was the Apple Uptown in Minneapolis. While under attack, the protesters made away with several items, with others, including the storefront damaged. Apart from that, a number of other stores across different cities were also vandalized during the ongoing Goerge Floyd protests.

Here’s a list of some of the Apple stores looted by rioters:

A video posted by Zane Sparkling, a Twitter user shows one of the Apple stores under attack in Portland. Have a quick look at it below:

Apple store in Portland being looted during protest pic.twitter.com/GqmGCOqRkt

Another video also shows the attack that happened in Scottsdale, Arizona, with several items looted during the George Floyd protests and others damaged.

The Apple store was looted and they were able to get into the mall through the Apple store. #fox10phoenix pic.twitter.com/YoUwRSbiRq

However, reports from Apple employees have assured that most looters won’t be able to make use of items stolen from the stores. That’s because the company has rendered most of the items trackable and inoperable.

Video: Bus hijacked and set on fire during Belfast riots