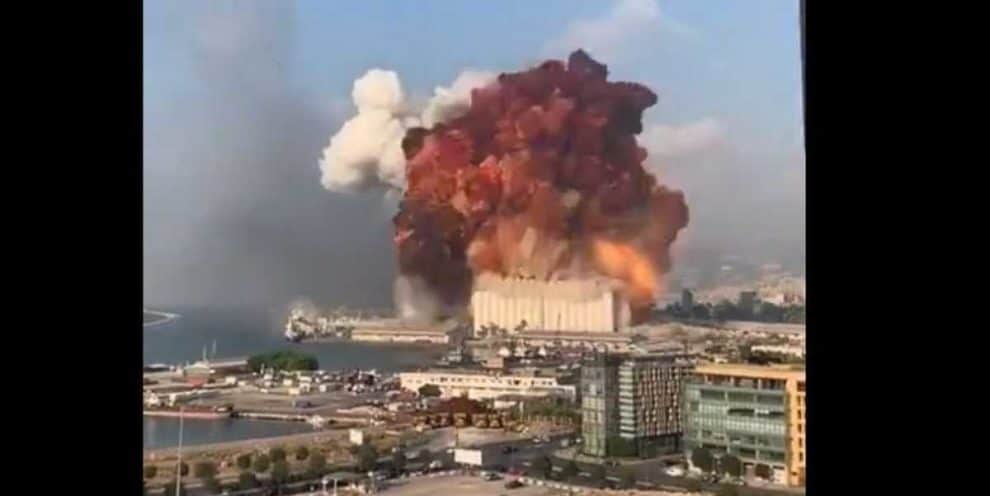 A huge explosion in Beirut this Tuesday killed more than 100 people and injured over 4 thousand near the city’s port. One of the United Nations peacekeeping force ships in Beirut was also damaged and personnel were left injured. Unconfirmed reports are circulating, according to which there were not one but two blasts – the second one near the former Prime Minister Saad Hariri house. Be it a single blast or two, it was powerful enough to destroy glass windows kilometers away from the explosion’s epicenter. It was initially reported that a fire (in a building where explosives were stored) caused it. However, this has been denied by Lebanon’s General Security chief, according to whom there were only fireworks there – not explosives.

This tragedy took place amid a very tense situation in Lebanon. Internally, the country is going through a severe economic crisis (some say the worst in 30 years) and that has sparked nationwide demonstrations since at least October 2019. Such a situation resulted in the resignation of Saad Hariri. Apart from that, externally, tensions with Israel are on the rise and conspiracy theories are spreading in Lebanon and overseas.

A Lebanese Defense official was quoted as saying it was not a terrorist attack. US President Donald Trump has described it as an “attack”, though, when expressing sympathy for the victims. In the context of current Israel-Lebanon tensions, rumors about Israel being behind the tragedy are spreading fastly. Recently, Israel bombed Damascus (Syria) targeting Hezbollah fighters, which further increased tensions. Hezbollah is of course very popular in Lebanon – and here some context is needed: the organization had a key role in expelling the Israelis during the 1982-2000 South Lebanon conflict, when Israel invaded Lebanon to pursue the Palestine Liberation Organization (Israel withdrew in 2000, and this was perceived as a victory for Hezbollah). More recently, IDF and Hezbollah paramilitary forces engaged in conflict during the 2006 Lebanon war. Once again, Hezbollah claimed victory – even though Israel still occupies part of the Golan Heights. One could thus describe Hezbollah as being deeply embedded in Lebanese society. It runs hospitals, schools, and several infrastructures besides many social projects in the country. Technically, Lebanon and Israel are still at war.

Amid such tension, some Israeli authorities made statements on Tuesday (4) denying Israel had anything to do with the blast – for example, Israel’s parliamentary TV channel (Knesset TV) made an announcement denying such accusations. Israel’s Foreign Minister Gabi Ashkenazi, in his turn, claimed the cause of the explosion must have been a fire accident. Meanwhile, an Israeli Defence Forces (IDF) spokesperson has declined to comment on such allegations, claiming that the IDF does not comment on reports from foreign media. Israel has also offered humanitarian aid to Lebanon after the incident.

So far one can only speculate. It may of course have been a terrorist attack or clandestine operation – or not. But in any case the information war will most certainly ensue. One could think of the quite confusing July 27 incident involving Hezbollah fighters and Israeli military (near the disputed Sheba’a Farms): it is still unclear whether there were casualties or not – or just how many. Some sources assured no incident at all occurred. In any case, tensions erupted and Israeli authorities made several threats against Hezbollah, which, in its turn, promised to retaliate any attack.

One could also think of the Ukraine International Airlines Flight 752 (shot down in Iran on 8 January) or the Malaysia Airlines Flight 17 – shot while flying over eastern Ukraine. In both cases,  contrasting narratives arose. Some of them were labeled “conspiracy theories” and, as is often the case, the issue of “credibility” may depend on who is claiming what about whom.

It is not just a matter of “conspiracy theories” or “fake news”. One should think of it as part of a larger picture – that is, as part of an information warfare in the pursuit of soft power (and, sometimes, in the pursuit of escalating tensions). Modern warfare indeed extends way beyond the battlefield today. It is a complex process involving many actors and several grey zones – in a way, all major players are engaged in such warfare. That being so, the latest tragedy in Lebanon – and the narratives around it – inevitably will be used in this war.

Contributed by Uriel Araujo, a researcher with a focus on international and ethnic conflicts.