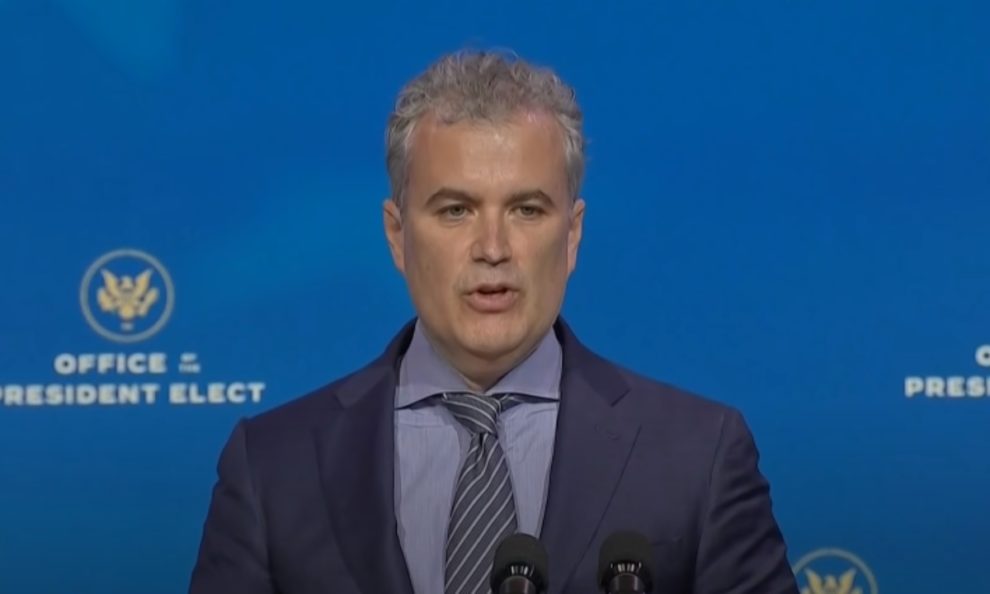 “Zients has failed to provide the materials necessary to improve the U.S. response, or the guidance necessary to keep the pandemic under control,” argued one critic.

Watchdog groups have long warned that Zients is not qualified to take on the massive task of leading the federal government’s pandemic response given both his lack of scientific and medical experience as well as his record in the private sector, where his firm invested in a company accused of exploitative surprise billing.

“He’s proven himself not up to the task, and Biden should relieve him of his duties.”

Early critics of Biden’s decision to appoint Zients to the key post believe their fears have been realized during the Omicron surge, which has laid bare the administration’s failure to prepare for a highly contagious variant that experts warned was all but inevitable.

Writing for The American Prospect, Daniel Boguslaw of the Revolving Door Project (RDP) noted Thursday that “amid an entirely predictable viral mutation and a winter surge, Zients has failed to provide the materials necessary to improve the U.S. response, or the guidance necessary to keep the pandemic under control.”

“He’s proven himself not up to the task,” he added, “and Biden should relieve him of his duties.”

Boguslaw, a researcher at RDP—which criticized Biden’s selection of Zients in December 2020—argued specifically that the pandemic response czar “has for the most part abdicated” his responsibility to utilize the Defense Production Act to ensure the widespread availability of high-quality masks and coronavirus tests, authority that Biden delegated to Zients.

“He could have spent the year mobilizing against a shared enemy in the virus, stockpiling enough personal protective equipment (PPE) and pharmaceutical products to protect the public,” Boguslaw wrote.

But as RDP’s Timi Iwayemi observed in an op-ed for Common Dreams last month, “Zients has prioritized cooperation with corporations rather than exercising a democratic government’s rights to protect the people.”

“Globally,” Iwayemi added, “Zients has emphasized vaccine charity over equity, all but ensuring that there will never be enough jabs in arms worldwide to prevent ever more mutations of the fast-changing virus.”

Boguslaw echoed that critique, arguing that “most damning among Zients’ failures is his refusal to allocate resources to aid vaccination efforts abroad.”

“As Vice News reported this week, Tito’s Vodka has donated more toward efforts to mass-produce an open-source, global vaccine than the White House,” Boguslaw wrote. “Global vaccine distribution is not only a humanitarian requirement, but also a critical step to preventing the development of new variants. But doing so would have required angering powerful forces in corporate America.”

Jeff Zients is Biden's coronavirus response coordinator. Someone needs to be held responsible for the lack of tests, lack of manufacturing capacity to vaccinate the world, the general "let 'er rip" attitude. It should be him, @DRBoguslaw writes:https://t.co/10Ts6ZhXPU

Calls for Zients’ ouster come amid intensifying outrage at the Biden administration’s overall pandemic response—anger that has hardly been limited to Zients.

In recent weeks, as Common Dreams has reported, nurses, union leaders, and public health experts have expressed dismay over confusing and potentially dangerous recommendations emerging from the Centers for Disease Control and Prevention, which last month loosened its isolation guidelines following a lobbying push from corporate America.

The administration has also allowed emergency workplace standards to lapse, leaving healthcare workers and others with weaker on-the-job protections as daily coronavirus cases remain at record levels. New figures from Johns Hopkins University show that the seven-day average for newly reported cases in the U.S. topped 800,000 for the first time on Saturday.

In response to surging infections, the Biden administration recently launched a program under which U.S. households will be able to order free rapid coronavirus tests. On Thursday, amid pressure from Sen. Bernie Sanders (I-Vt.) and other progressive lawmakers, Biden said the administration will also soon announce a plan to distribute free high-quality masks to people who request them.

While welcoming such steps, experts and observers have lamented the administration’s sluggishness in reacting to new pandemic developments, which has left people across the U.S. to fend for themselves while the White House plays catch-up. In October, the Biden administration reportedly rejected a plan to distribute free rapid Covid-19 tests for the holidays, hindering the nation’s response to the winter surge in the months that followed.

People who order tests under the new government program will likely have to wait roughly two weeks for them to arrive. And Biden didn’t offer a timeline for the free mask program, which he announced weeks after experts began warning that widely used cloth masks are not sufficient to ward off Omicron.

But former federal vaccine scientist Rick Bright disputed Harris’ narrative, writing on Twitter that he personally warned the Biden transition team in December 2020 that “variants were coming and we needed plans and action immediately.”

Looking ahead, Gounder told the Washington Post on Thursday that “there will be another [variant]—and we might as well learn our lesson and prepare for the next one appropriately.”

“Every time, we’re sort of like, ‘Well, why bother because this is the last surge,'” she said. “And I think that’s completely the wrong way to think about it.”