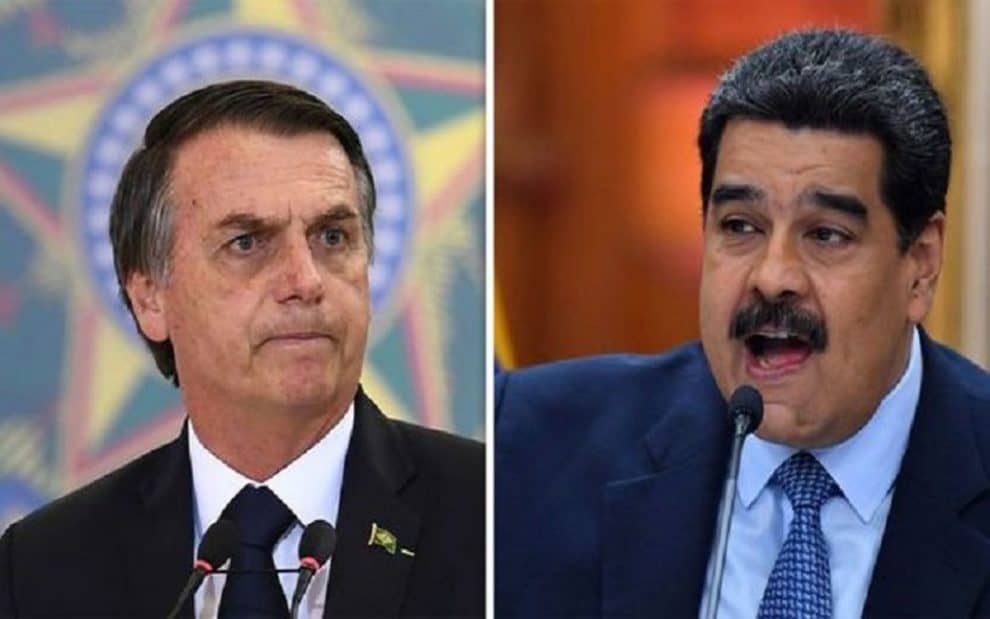 Would Brazil cooperate with US plans for “regime change” in Venezuela?

The US is still pursuing the overthrow of Venezuela’s president Nicolás Maduro and it has recently become clear that Colombia (who is, since 2018, NATO’s first Latin American “global partner”) is indeed willing to cooperate with the US in such endeavor. Would Brazil be so inclined? War talk between the two countries was hot from 2018 to 2019. It had cooled off, but tensions may be on the rise again.

For instance, even after Maduro closed its border with Brazil (February 2019), Brazil and Venezuela have been constantly clashing over humanitarian aid, migrants, gold smuggling and other issues on the border. On Thursday (6 August), for example, the Brazilian Federal Police launched a raid in the border region to arrest smugglers. Brazil has also been accusing the Venezuela government of being involved in both gold and diamond smuggling. Last month, Venezuela, in its turn, accused Brazil of being a sanitary threat to the entire continent due to its mishandling of the COVID-19 epidemic and on Saturday (8 August) reiterated its appeal to the UN to take action. Regardless of the merit of such claims, there is indeed a geopolitical cold conflict between an eager new US ally and one of Russia’s important military and trading allies.

Meanwhile, the internal situation in Venezuela is quite tense. Suffice it to say that around 30 political parties have announced that they shall “boycott” the coming elections over the issue of a Supreme Court ruling. On 12 June, Venezuela’s Supreme Court appointed new members for the National Electoral Council board, amongst them Rafael Simón Jiménez. This move was then denounced by some as a usurpation of legislative powers. The Constitution indeed grants such power to Congress but the Supreme Court ruled that the opposition-run legislature failed to name the Electoral Council leadership and therefore was in “unconstitutional omission”. Amid such a crisis, the aforementioned Mr. Jiménez, who was the council’s vice-president, resigned his post on Thursday (6 August).

Meanwhile, Juan Guaidó is still recognized by around 50 countries as the “de jure” president of Venezuela – he assumed a sort of “parallel presidency”. The problem is that by boycotting the elections, the opposition risks losing the majority it currently holds – and thereby its claims to legitimacy. Brazil recognizes Guaidó as do the US, Israel, France, Germany, and half of Western Europe. Russia, China, Iran, and Turkey, in their turn, recognize Maduro. Meanwhile, many other countries remain “neutral” (including India, Mexico, and Indonesia). If the Catholic world, from 1378 to 1474, had two disputing Popes, Venezuela today seems to have two presidents, depending on whom one asks – but Maduro of course is clearly in charge. The United Nations Security Council, in its turn, has not reached a consensus on the matter.

On Wednesday (5 August), Elliot Abrams, who was still the US Special Representative for Venezuela, stated that the US government is still doing everything in its power to remove Maduro from office. Mr. Abrams has also urged those countries who still recognize Guiadó to keep their positions on the issue regardless of the election’s outcome. On Friday, the US new envoy to Venezuela, James Story, announced there will be further sanctions to “bad actors”.

The tensions between Venezuela and the US also take place in court. After a long judicial battle, a court in Cape Verde has approved the extradition of Alex Saab to the US (Saab’s legal team is going to appeal). He is accused by American authorities of being the mastermind of the Venezuelan government’s supposed corruption schemes. One should keep in mind that Maduro himself is also under indictment in the US (and many other officials). It has become very clear that the US is also pushing the “drug trafficking” narrative against Venezuela.

All of this signals that the US is still very much willing to impose “regime change” on Venezuela by any feasible means, be it by supporting a Venezuelan “spring” or by direct military intervention. In such a scenario, what would be the role of Brazil? General Mourão, Brazil’s vice-president, famously stated in an interview during the last election campaign that Brazil’s next peace mission would be in Venezuela – but later retracted the claim. In May, there was of course the unsuccessful Operation Gideon, an attempt by American security firm Silvercorp and Venezuelan dissidents to overthrow Maduro. It has become public that there was a contract between Guiadó’s Strategic Committee and Silvercorp – the leaked document states that in case of an American military intervention, Brazil and Colombia would not object to the use their airspaces. Brazilian society today is strongly polarized and many Brazilians do perceive Maduro’s “regime” and what they describe as “communism” as the enemy. This extreme scenario of course would be a disaster for the continent. But one should not rule it out as a possible outcome.

Contributed by Uriel Araujo, an anthropologist and researcher based in Brazil who has published in Katehon, Geopolitca.ru and Fort Russ.