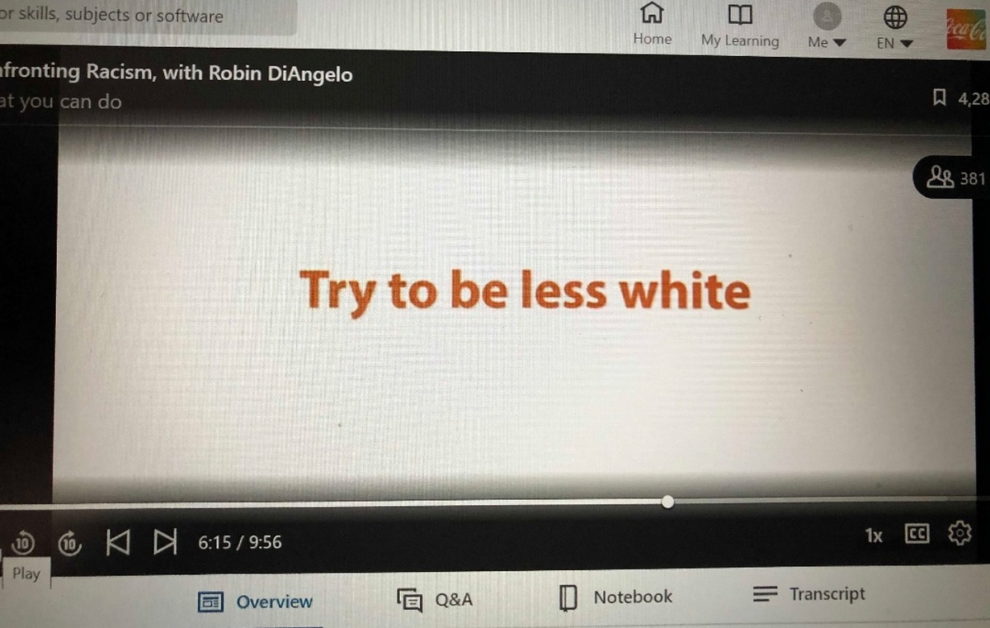 Coca-Cola is accused of demanding employees to ‘try to be less white’. The company is facing a strong retaliation for allegedly joining a series of American corporations that inculcate their white employees with critical race theory.

Coca-Cola wants employees ‘to try to be less white’

Robin DiAngelo is a strong advocate of critical race theory. She conducts high-dollar corporate seminars on ‘whiteness, white fragility and ‘racial justice.’ This course, Confronting Racism, with Robin DiAngelo, is offered through the LinkedIn Learning platform.

??? BREAKING: Coca-Cola is forcing employees to complete online training telling them to "try to be less white."

These images are from an internal whistleblower: pic.twitter.com/gRi4N20esZ

One slide of the course says that to be less white is to: be less oppressive; be less arrogant; less certain; less defensive; be less ignorant; be more humble; listen; believe; break with apathy, and break with white solidarity.

Another slide says that in the US and other Western countries, white people are trained to feel inherently superior because they are white. Also, research suggests that by age 3 to 4, children learn that it is better to be white.

A spokesperson from Coca-Cola released a statement in response to the images on Friday. He acknowledged they were from a company-sponsored seminar but not the main ‘focus’ of its educational learning.

“The video circulating on social media is from a publicly available LinkedIn Learning series and is not a focus of our company’s curriculum,” the spokesperson said, but added that the course is “part of a learning plan to help build an inclusive workplace.”

Borysenko believes that this advice is just to keep the cash flow to so-called “diversity trainers” like DiAngelo. She charges $12,750-$14,000 for speaking and conducting sessions and has earned around $2 million from her bestselling book.

Internet users reacted strongly to the leaked images. They even turned to the Department of Justice to investigate Coca-Cola’s alleged discrimination against its employees. Donald Trump Jr., the son of the former president also posted a tweet in response to the controversy.

Some users praised Coca-Cola for its efforts and suggested that only bigots are mad about the ‘try to be less white’ training course.