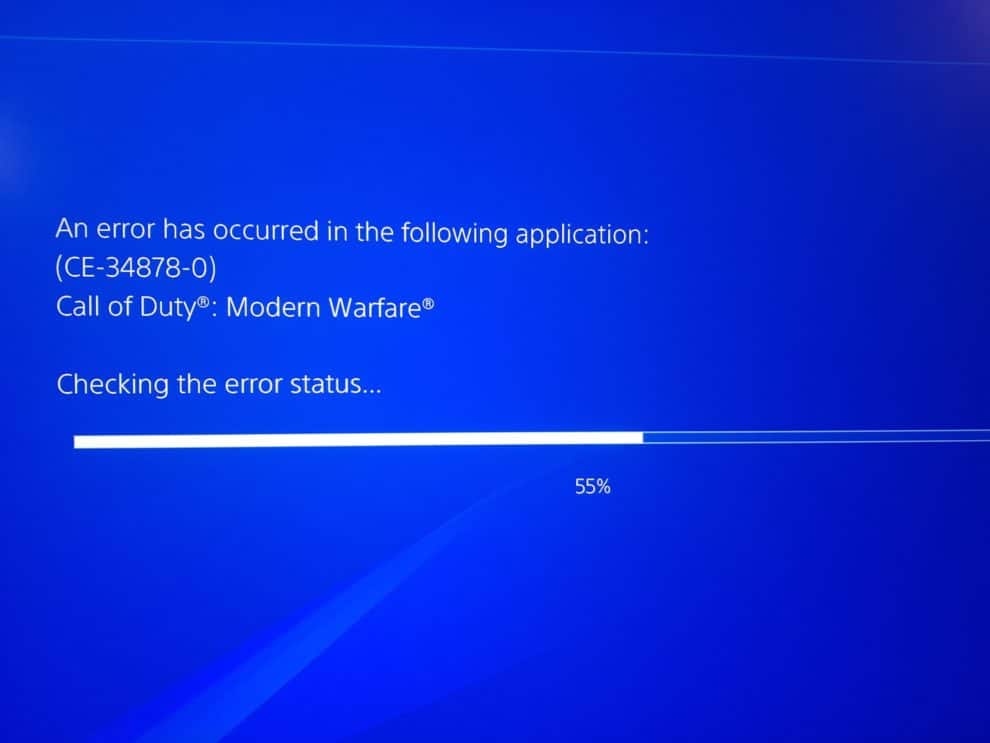 UPDATE Sept 29, 13:00 EST: Call of Duty Modern Warfare and Warzone players are facing a new issue today, many gamers took to Twitter to complain about crashing issues with the game after the new update.

According to reports The COD Modern Warfare and Warzone game is crashing on PlayStation 4, PC and other platforms. The error message is added to the featured image of this story.

The good news for gamers is that the Activision has acknowledged the issue. The developer is now working on the fix of the crashing issue: Here’s what the game developer’s support account says:

We’re actively investigating an issue where some players are experiencing crashes after the update in #ModernWarfare and #Warzone. Stay tuned for updates.

Here’s how Twitter reacts to Warfare and Warzone crash issue:

Another user @TheMonotoner tweets, “Might have to cancel chief, the warzone new update is causing crashing for a lot of ppl.”

According to @dexmajstor, “After update, game is constantly crashing on PS4, second time in one hour of playing, please help “

“@CallofDuty has had annoying bug where group members get knocked out after games, but no reason given. The new patch fixes it by just crashing the game after matches, giving you a reason at least… /s”, says Twitter user @ZonNero.

UPDATE Aug 24, 10:20 AM EST: Reports have highlighted that Warzone Servers are down. The popularly played game Call of Duty is facing issues with connectivity. Down detector, the independent outage monitor has seen a huge spike in reports for Call of Duty being down today.

The issues are mainly being experienced by users from UK, US and Europe. Out of the total complaints received, 92 percent are being experienced by fans trying to play Call of Duty.  The official Activision server-status websites have assured the players that makers of Call of Duty are investigating the server connection issues occurring in Modern Warfare and Warzone.

The users have expressed their dismay on platforms such as Twitter regarding the inability to connect with the Warzone servers. The server error message is currently making rounds on Twitter.

At the time of writing this update, users report that they now are able to log in back to the game. So it’s all back to normal.

UPDATE: Aug 18, 12:48 PM EST: An issue where players were unable to login to ModernWarfare and Warzone has been fixed. Many players report they are now able to access the game.

UPDATE: Aug 18, 11:36 AM EST: Call of Duty: ModernWarfare and Warzone are currently experiencing a server outage across all platforms, Activision has acknowledged the issue.

Users report that they were unable to connect with the Call of Duty server the entire day, despite retrying numerous times. Some players speculate that the server has banned certain IP pools which is why issues on a massive scale are occurring.

Some players even expressed disappointment at the support staff’s absence regarding the entire issue, one user reported that they had been continuously calling the support numbers provided but no one picked up.

Here’s what is happening? When Call of Duty gamers try to join an online game, they get stuck on a “connecting to online services” and “fetching online profile” screen for a while. Then the players get a pop-up error message showing ‘code 8192’.

The Activision’s website states that there is a connection outage on all platforms.

UPDATE Aug 11, 14:30 pm: “This issue is now resolving. You may still encounter a temporary queue as players begin to reconnect. Thank you again for your patience.” says the developer of the game in a tweet.

Call of Duty Modern Warfare and Warzone servers are down. Infinity Ward, the developer behind the Call of Duty franchise, is aware of the problems. The developer team tweeted that they’re looking into an issue in which some players are unable to connect to the servers.

They will post another update when they have more information.

Check if Call of Duty Modern Warfare, Warzone servers are down

The patch included a number of bug fixes and weapon tuning, according to a tweet from Infinity Ward.

Here are the problems being reported

The error that’s being reported the most often with Warzone is a server queue error. Many players are also reporting various error codes. Other issues reported include connection failed errors and login errors. A few are reporting lag and other problems.

With Modern Warfare, by far the most common problem being reported is issues with the server queue. Many players are also reporting various error codes and connection failed problems. Still others are having login issues. No one is reporting lag or other problems, according to the server status page.

At least some of the problems are being resolved by restarting the device, according to the Call of Duty team:

Some users might be experiencing Server Queues while attempting to log into Modern Warfare & Warzone. We’ve seen a restart fixing the issue.