GoPro has officially unveiled the Hero 9 Black action camera. It brings some major changes and improvements over its predecessor. The Hero 9 is undoubtedly the best action camera to come out of GoPro’s stable. In this GoPro Hero 9 vs GoPro Hero 8 comparison, let’s check out how the new camera has improved over the last year’s model.

GoPro has also added a new color front display on the Hero 9 Black. It is a brilliant addition to attract vloggers and those who take selfies using their action camera. The Hero 8 Black has only a monochrome front display.

Just like the Hero 8’s monochrome display, the Hero 9’s front display showcases the frame-rate, battery percentage, resolution, and the remaining memory card capacity. Customers can choose between a full live preview of the scene or a cropped center portion. 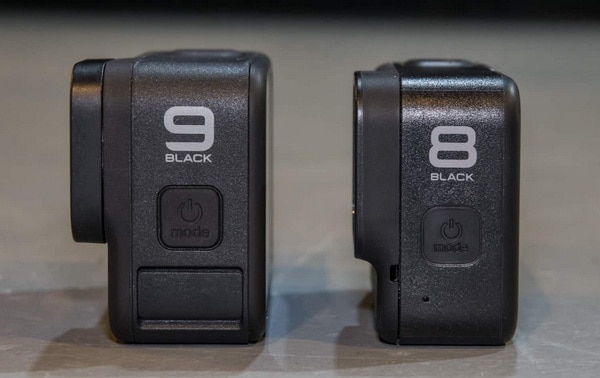 The Hero 9 Black sports a new 23.6-megapixel sensor. That’s double the resolution of the Hero 8’s 12MP lens. The new camera can capture up to 5K videos at 30fps compared to 4K with the Hero 8. However, it will take photos only at 20.2MP. Its greater resolution allows you to capture more details.

The Hero 9 Black also has Hypersmooth 3.0 and TimeWarp 3.0, both upgraded from last year’s Hero 8. TimeWarp 3.0 can now record audio when you slow down the footage to Real Speed of half-speed.

The Hero 8’s Boost mode was limited to 4K resolution at 30fps. The Boost functionality yields a more steady footage, though it’s cropped and has a relatively lower resolution. But the Hero 9 Black can shoot in Boost mode at full 5K resolution.

Also, the Hero 9 Black offers in-camera horizon leveling. Onboard sensors in the new action cam can level out the footage, easily taking care of the moderate tilts. For more advanced horizon leveling, you may need the Max Lens Mod, which locks the horizon.

GoPro fans were surprised when the company dropped the removable lens cover from the Hero 8 Black. The swappable lenses had received a mixed response, but a large number of customers loved it. The Hero 9 Black brings back the removable lens cover. What’s more, the California company has announced an interchangeable lens mod called the Max Lens Mod.

The Max Lens Mod allows the new Hero 9 to shoot with a 155-degree field of view at up to 2.7K resolution and 60fps. You have to buy the mod separately for $80. It also supports horizon leveling.

The GoPro Hero 9 Black gets a giant 1,720mAh battery. By comparison, the Hero 8 features a 1,220mAh battery pack. GoPro claims the 41% increase in battery size will lead to up to 30% jump in battery life. It would depend on what mode you are using. Hero 8’s battery lasts about 1.5 hours while the Hero 9 Black goes strong for more than two hours. That’s a praiseworthy upgrade.

Other differences of GoPro Hero 9 and Hero 8

The Hero 9 Black has a bunch of other features that were missing from the Hero 8. The Schedule Capture feature on the new cam allows you to schedule recording. It comes handy when you want to record a specific event while you are busy with something else. It’s also useful if you want to start recording from multiple Hero 9 cameras at the same time.

All these features come at an additional cost. The Hero 9 Black costs $450, up 11% from the Hero 8’s launch price. GoPro is also offering a $499 bundle that includes the Hero 9 Black and a new subscription service. The Hero 8 Black is now available at an attractive price of $300. Whether to buy the new one or its predecessor depends on your budget and requirements.

Side by Side: Video Comparison