Without a doubt, China and India have been at loggerheads for a long time. While we thought things will get better sooner, it looks like the dispute between them have started taking a new approach. A few weeks ago, both countries started sending troops across the border, heading towards a physical confrontation along the Line of Actual Control. Now, Indians seem to have discovered another approach to defeat the Chinese. According to Sonam Wangchuk, he believes one strategy India can employ to defeat China is to boycott all Chinese products, especially apps.

Wangchuk Advises India Citizen To Boycott All Products Of China

According to a YouTube video posted by Sonam Wangchuk, India people have been advised to boycott all Chinese products, to help them take revenge for the intrusion and territory dispute caused by China.

In the video, Wangchuk claimed one of the ways to defeat China is by making use of wallet power. In addition to that, he said the approach is more effective than the bullet power. He also added that it doesn’t make sense to be patronizing the Chinese products at the time when troops from India are fighting with the Chinese PLA soldiers.

“That is more like supporting China with more money to invest in their military men,” Wangchuk claimed.

Shortly after posting the video, India people started trending different hashtags, including Boycott China and Boycott Tiktok, on Social Media. A lot of superstars, including actor Milind Soman, Baba Ramdev, and many more, have also joined the movement.

I am no longer on TikTok. #BoycottChineseProducts 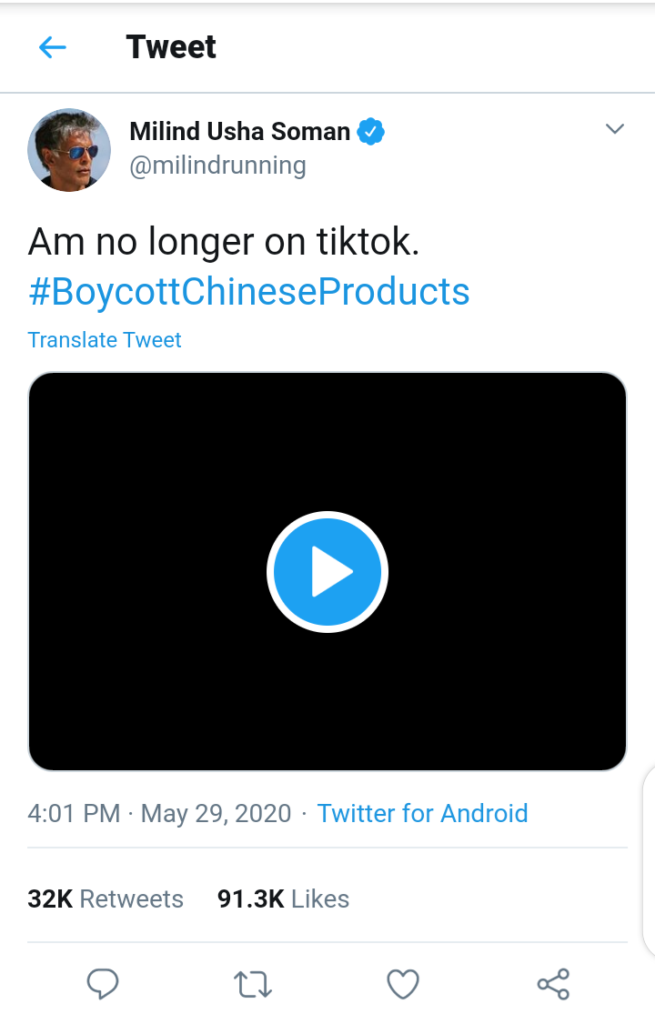 Baba Ramdev has also voiced his support for the Boycott Chinese Products’ movement in one of his posts on Twitter. Although he tweeted in Hindi, a translation to English shows he also supports the new trends. Check what he posted below:

“Deleting Chinese applications from your mobile is also a service to the nation, “

Also, researches on Google have revealed that a lot of Indian people have started following the trend, and looking for ways to boycott the Chinese apps, including TikTok, Zoom, Shareit, UC Browser, and many more.

Reports have it that One Touch AppLabs have taken advantage of the current trend. Now, it has developed an app that will help Indians to boycott any Chinese products on their device.

The app, called Remove China Apps works according to its name when installed on the phone. It helps users to detect Chinese apps, giving them the option to delete the products from their devices.

Looking at the feedback on Google Play Store, it looks like a lot of Indians are already enjoying the app. Presently, the app has a rating of 4.8, with thousands of positive reviews and over a million downloads.