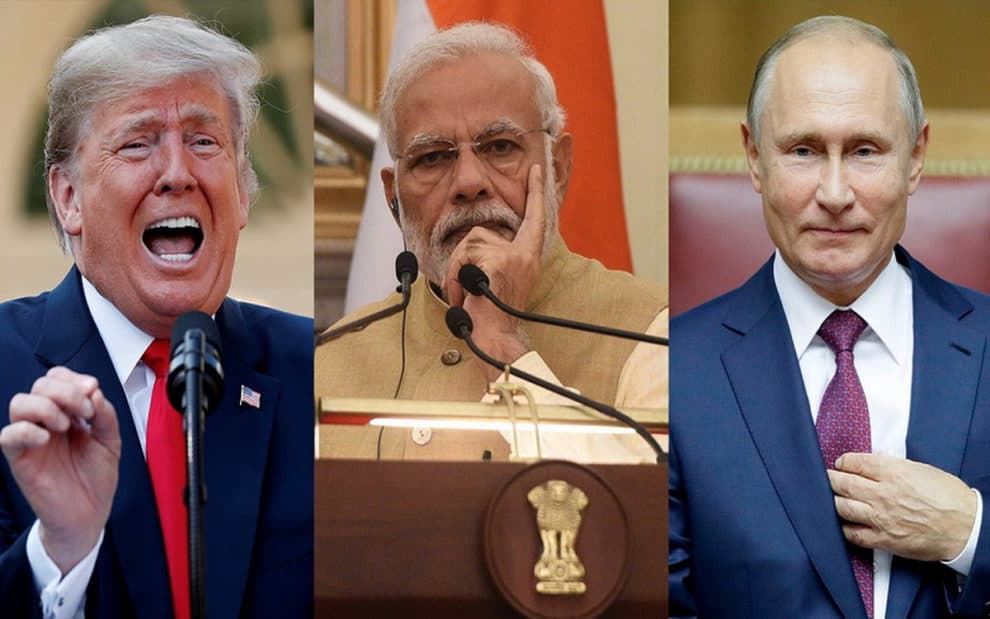 Russia told India that it would not mediate in the Sino-Indian border dispute. India, after failing in seeking support from the US and its Western allies, including Japan and Australia, desperately approached Russia as the last hope. Referring to the Russia-India-China (RIC) video-conference meeting at the Foreign Ministerial level, Russian Foreign Minister Sergey Lavrov said in response to a media inquiry that: “You asked me whether Russia can contribute to better relations between India and China, … We never sought to help India and China build better relations because they have everything they need to solve every kind of problem which may possibly arise between them. It’s ok to have problems with your neighbors and with other countries … I don’t think India and China need any help from the outside … especially when it comes to concrete issues. They can solve them on their own. … I see no reason why Russia or anyone else would be imposing their services in India and China to help them solve their own problems.”

The Russian response has increased Indian frustration further, and people in India are turning on the BJP government for its wrong policies. The moderate Hindus, intellectuals, and professionals are raising questions about the government’s failed policies and are holding the Modi-led government responsible for the complete isolation of India. Even the opposition leader has termed Prime Minister Narendra Modi as “Surrender Modi.”

India had high expectations from the US and its Western allies, and since the beginning of border dispute with China in the Ladakh region, was in touch with them seeking support. India was expecting that US or NATO troops will come to help India because India is a “Major Defense Partner” of the US and member of the “Indo-Pacific Treaty.” After receiving a cold response from the US, NATO, EU, and Japan, India turned to Russia as the last hope. Indian requested a trilateral video conference of the Russia-China-India format at the Foreign Minister level, seeking Russian support to resolve the dispute.

Russia maintains strategic relations with China, and since the resolution of their last border differences in 2014, Russia-China relations cemented further. In fact, the convergence of interests has made the bond of friendship even stronger. Russia and China have been increasing their economic, political, and military ties exponentially. Chinese President Xi Jinping even called Russian President Vladimir Putin his “best friend” in an uncharacteristic display of warm relations during a recent state visit to Russia. China and Russia have signed statements committing to “the development of strategic cooperation and comprehensive partnership” and “strengthening strategic stability (which) includes international issues of mutual interests, as well as issues of global strategic stability.”

India was used to exploiting Russia-China differences during the 1960s, 1970s, and 1980s. India was in the habit of adding fuel to Sino-Russo differences to promote her own interests and was getting maximum favors and benefits from Russia. There was a time in history when there existed some misunderstanding between China and Russia, especially on border issues. For a couple of decades, the relations kept on improving until the present day when the two countries are now strategic partners. India might try to create misunderstandings again and try to be a beneficiary, but today, Russia and China have matured enough and will not become a victim of this once more. One can trust that India will not succeed in its evil designs. In fact, the Sino-Russo strategic partnership is vital for their survival too.

Yes, India was with the former USSR bloc in the 1950s to 1991 till the disintegration of the Soviet Union. During that period, India was a beneficiary of Soviet assistance, in all aspects, including, economic, educational, scientific-technical, defense, political and diplomatic. India was meeting its defense needs with Soviet assistance, and its industry was established with the crucial help of the Soviet Union.

But after December 1991, India turned its face from Russia, thinking that Russia is impotent and cannot help India anymore. Selfish India set to develop its relations with the US. Through lobbying and strong marketing, gradually, India succeeded in developing its relationships with the US and the Western World. The Civil Nuclear Deal, the Major Defence Partner agreement, The Indo-Pacific Alliance, etc., are worth mentioning when discussing India’s relations with the US and the Western World, including Japan and Australia. India aligned itself with the US, which was a direct threat to Russia or contrary to Russian interests. During the last few decades, India undermined Russia and prioritized the US.

Under this scenario, it is a “fool’s paradise” if India expects to gain Russian support. In fact, India was never sincere with the Soviet Union, nor with the US. It was milking the Soviet Union as long as possible, then turned toward the US and is milking it to become the largest beneficiary of its aid after Israel. It is believed that first, India needs to learn to be sincere with others, and then it can expect sincerity from them in turn.