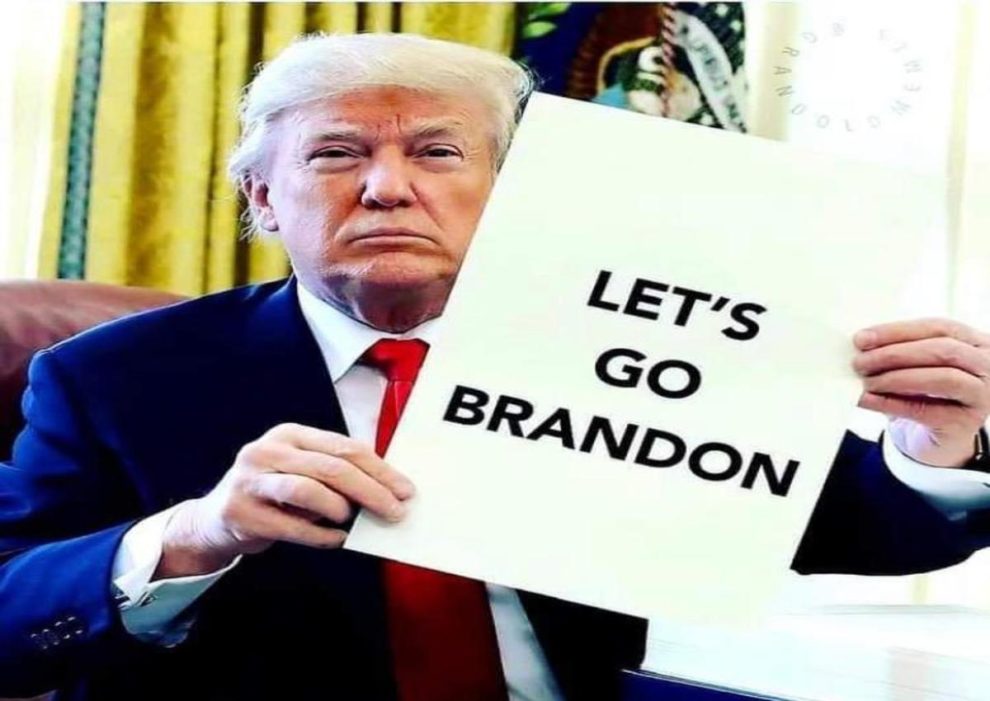 Mistakes are a part of our lives and can happen at any time, whether at home or at work. Most of them you can just look past, laugh, and move on. But when you are a public figure and anything you say has the potential to go viral, even tiny mistakes can spread over the far reaches of the internet. And that is exactly what happened with Let’s Go Brandon.

During an interview with NASCAR driver Brandon Brown in October 2021, the audience chanted “F*** Joe Biden.” And the NBC interviewer’s futile attempt to contain the damage made the moment iconic.

Supporters of former President Donald Trump and everyone present at the NASCAR event made chants against President Joe Biden. Here’s what happened:

When the crowd during the interview with Brandon Brown, after his sensational performance in NASCAR Xfinity Series [where Brandon secured the win], started making use of the unsavory chant “F*** Joe Biden. The interviewer Kelli Stavast tried to control the scene with a rather pitiable attempt by claiming the crowd was chanting something else.

Kelli in her attempt to keep things (maybe?) professional claimed that the crowd was chanting, ‘Let’s Go Brandon’. “Brandon, you also told me — as you can hear the chants from the crowd,” Kelli said. And when the camera moved towards the audience, they were originally heard chanting “F*** Joe Biden.”

After the interview of Brandon and NBC reporter, people started ‘meme-ing’ about the viral phrase. Neither Kelli nor Brandon has responded to the meme as of now. And it is still unclear if they actually misheard the crowd or were trying to cover up the incident.

I’m pretty sure they’re not chanting “Let’s go Brandon” as the NBC reporter is telling us. What do you hear? #fjb https://t.co/Ai6QU9uEZf

The phrase “Let’s Go Brandon” has acquired a new meaning as protesters have found a way to take their anger on Joe Biden and left-wing media without repercussions.

The phrase has gained so much popularity over such a small period of time that even Sen. Ted Cruz, a Republican from Texas, jumped on it, and in an interview on Thursday with podcaster Benny Johnson, said that it was “one of the funniest things I’ve ever seen.”

“The clip is surreal,” Mr. Cruz said. “Listening to Kelli say, ‘Look, they’re chanting let’s go Brandon.’ It captures everything about fake news all at once.”

Brandon Brown’s incident is not the first “F*** Joe Biden” chant event. According to Newsweek, the chant first broke out during an NFL game. Out Kick adds and says the chants are “taking over college football” and are making their way over to baseball games.

It didn’t take long for Twitter to turn Let’s Go Brandon into a meme after what happened during the interview. One of the most common usages of the phrase is to attach it to a piece of news that has a negative view for the president. For example, “Economy in the dumps, you say? Well, let’s go, Brandon!”

Even Biden has come into direct contact with the phrase; during his visit to Michigan the following week, he was confronted by a group of protesters, all of whom were chanting the viral “Let’s Go Brandon” phrase.

Another recent occurrence has added fuel to the “Let’s Go Brandon” fire. A young boy helped initiate the NAPA Super DIRT race. The announcement starts off innocently but soon takes a comic turn as one of the boys invited says Let’s Go Brandon.

Even Donald Trump’s eldest son couldn’t hold back from joining and made multiple pokes at Joe Biden. He even shared a tweet showing protesters outside New York’s Department of Education chanting, you guessed it, Let’s go Brandon.

This viral meme has spread rapidly worldwide and can be seen everywhere on social platforms. They are even made into custom die cut stickers of various styles. The stickers are stuck on clothes, cars, laptops, and even multiple places for publicity. 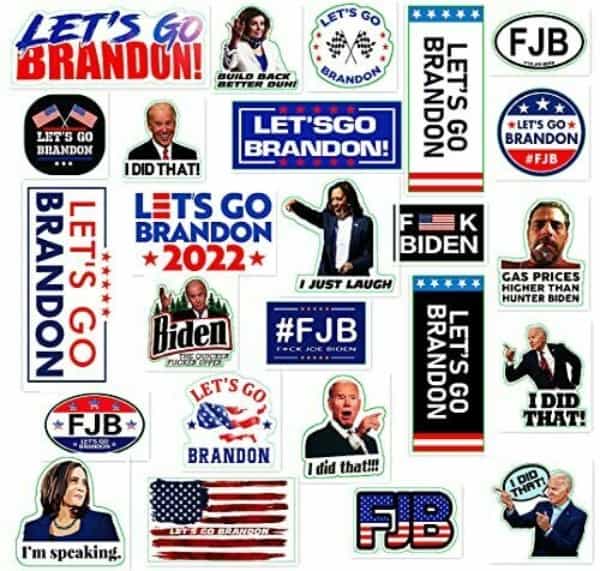 The meme has spread over like wildfire with the phrase printed on t-shirts and photoshopped everywhere. However, the best memes are still available on Twitter. 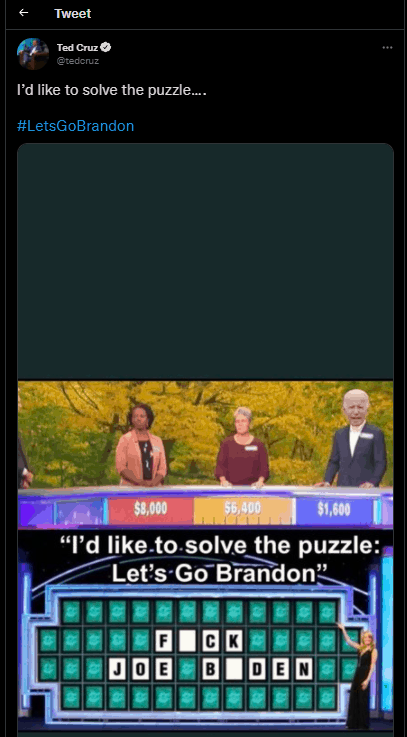 People also posted pictures of Billboard with Let’s Go Brandon written over it: 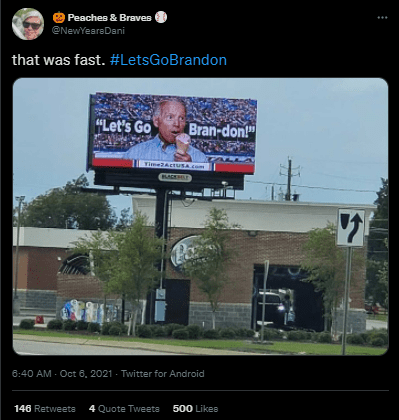 The virality of this phrase, cannot be underestimated as something that would fizzle out in a few weeks. The phrase has reached the global audience, for example a news article on Sky News covered a story about a mob outside of the US embassy in Rome, chanting phrase Let’s Go Brandon.

Things regarding the phrase have garnered so much attention that it’s not just a meme anymore, it’s a political statement addressing the current presidential tenure. It’s now a movement, around the world, against the current office-holding president based upon a plethora of foreign and domestic controversies.

An anti-Biden rap song inspired by the viral “Let’s Go Brandon!” trend has risen to the top of the iTunes hip-hop chart.

The song, performed by rapper Loza Alexander and titled “Let’s Go Brandon,” first went viral on TikTok before rocketing to the top of the iTunes hip-hop chart.

The song features a female voice saying “Let’s Go Brandon” and the response is, “You know what they’re saying, ho.”

Listen to the song by Loza Alexander right here:

A video of a California police officer saying “Let’s go Brandon” over the loudspeaker is going viral. After he did so, the audience erupted in applause. The phrase, which has become something of a meme, has become a sort of rallying cry for critics of President Joe Biden.

What Does Meme Mean?

You may have come across the hashtag or phrase “Let’s Go Brandon” on social media and wondered what it meant.

The phrase or hashtag is in related to an incident involving NASCAR driver Brown and NBC reporter.

Brown recently won his first Xfinity race and was interviewed afterward, while fans in the stands chanted.

The fans’ chants appear to be “f*** Joe Biden”, but the reporter said during the interview that the chants were “Let’s go Brandon.”

After this viral incident, people have been making memes with the phrase and sharing them on social media.

This article was updated with latest information on October 19, 2021.