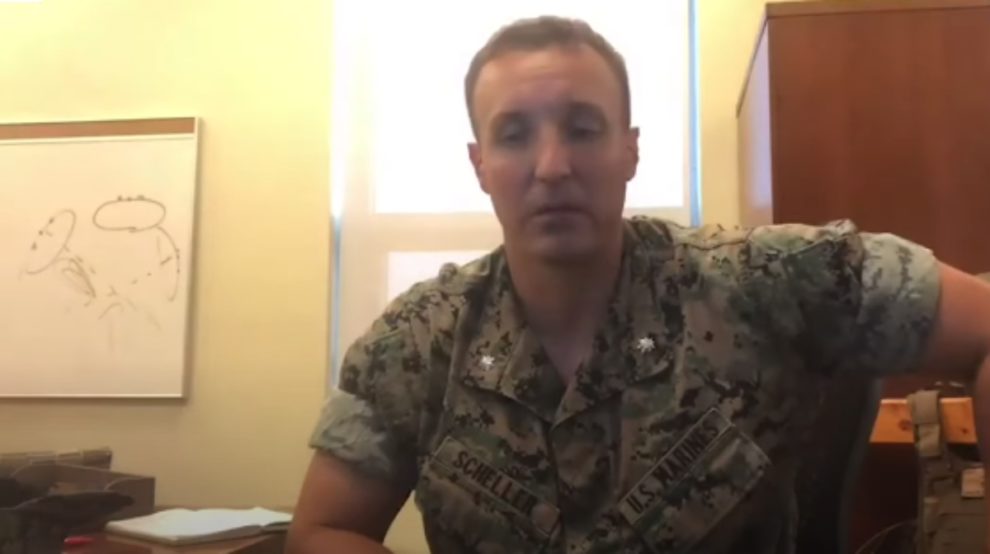 Following an ISIS-K attack outside a Kabul airport that killed at least 13 US servicemen and more than 100 Afghans, a Marine officer Scheller was relieved of duty on Friday after criticising military leaders in a viral video.

I am willing to throw it all away to say to my senior leaders, ‘I demand accountability – Marine Commander Stuart Scheller

Marine commander Stuart Scheller, who made a viral video, said he’s putting his nearly two-decade career on the line to call out senior military and civilian leaders for failures in Afghanistan.

On Thursday, a Marine infantry officer and battalion commander took to social media to express his dissatisfaction with senior military leadership’s handling of the United States military’s withdrawal from Afghanistan, as well as what he claims is a lack of accountability for mistakes made by those charged with managing America’s longest war.

“I’m not saying we’ve got to be in Afghanistan forever, but I am saying: Did any of you throw your rank on the table and say ‘hey, it’s a bad idea to evacuate Bagram Airfield, a strategic airbase, before we evacuate everyone,’” asked Marine Lt. Col. Stuart Scheller in a recent video shared to Facebook and LinkedIn.

“Did anyone do that? And when you didn’t think to do that, did anyone raise their hand and say ‘we completely messed this up.’

Scheller, who identified himself as the Battalion Commander for the Advanced Infantry Training Battalion, posted the video on Facebook Thursday evening.

Scheller updated a Facebook post again on Friday afternoon, announcing that he had been relieved of duty:

“My chain of command is doing exactly what I would do… if I were in their shoes,” he wrote. “I appreciate the opportunities AITB command provided. To all the news agencies asking for interviews… I will not be making any statements other than what’s on my social platforms until I exit the Marine Corps. America has many issues… but it’s my home… it’s where my three sons will become men. America is still the light shining in a fog of chaos. When my Marine Corps career comes to an end, I look forward to a new beginning. My life’s purpose is to make America the most lethal and effective foreign diplomacy instrument. While my days of hand to hand violence may be ending…I see a new light on the horizon.” 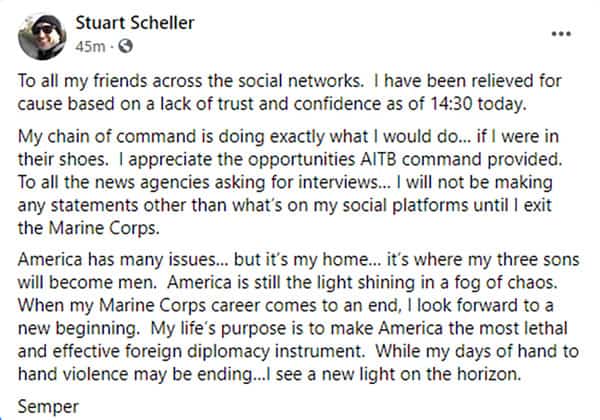 Scheller is currently stationed at Camp Lejeune’s School of Infantry East and will take over as AITB commander in June 2021, according to his official bio.

The infantry officer began the video message by addressing the terrorist attack on Thursday at Kabul’s Hamid Karzai International Airport by Islamic State militants, which killed 13 US service members. The Marine Corps confirmed on Friday that 11 of those killed in the attack were Marines in a statement.

“I’ve been in the Marine infantry for 17 years. I started my tour with Victor 1-8, that’s the current unit that’s doing perimeter security, dealing with the mess that’s going on there,” Scheller said. “You can see open-source reporting that there was an explosion and some people were killed. I know through my inside channels that one of the people that was killed was someone that I have a personal relationship with. I won’t go into more detail because the families are still being notified.”

“I’m not making this video because it’s potentially an emotional time. I’m making it because I have a growing discontent and contempt for my perceived ineptitude at the foreign policy level and I want to specifically ask some questions to some of my senior leaders.”

Video before Marine was relieved of duty

Excerpts from the video of Marine Commander Stuart Scheller:

“And sir, you wrote ‘Some of you may be struggling with the simple question ‘was it all worth it? We want you to know that your service is meaningful, powerful and important. You fought for the Marine to your left and the Marine to your right. You never let them down.’

The reason people are so upset on social media right now is not because the Marine on the battlefield let someone down. That service member always rose to the occasion and has done extraordinary things. People are upset because their senior leaders let them down and none of them are raising their hands and accepting accountability or saying ‘we messed this up.’

But we have a secretary of defense that testified to Congress in May that the Afghan National Security Forces could withstand the Taliban advance. We have Chairmen of the Joint Chiefs — who the commandant is a member of that — who’s supposed to advise on military policy. We have a Marine combatant commander. All of these people are supposed to advise.

And I’m not saying we’ve got to be in Afghanistan forever, but I am saying: Did any of you throw your rank on the table and say ‘hey, it’s a bad idea to evacuate Bagram Airfield, a strategic airbase, before we evacuate everyone.’ Did anyone do that? And when you didn’t think to do that, did anyone raise their hand and say ‘we completely messed this up?’”

Scheller stated that he is ready to risk his position, retirement, and “family’s stability” in order to say that “it gives me some moral high ground to demand the same honesty, integrity, and accountability for my senior leaders.”

“But what I’ll say is, from my position, potentially all those people did die in vain if we don’t have senior leaders that own up and raise their hand and say ‘we did not do this well in the end,’” he said. “Without that we just keep repeating the same mistakes.”

“I want to say this very strongly: I have been fighting for 17 years. I am willing to throw it all away to say to my senior leaders ‘I demand accountability.’”