Unlike the previous phone models, the OnePlus 8 Pro offers amazing features, including having support for wireless charging and being resistant to water and dust. But do you know that the OnePlus 8 Pro device also has a camera feature similar to that of x-ray? Well, if you’re fortunate to have the phone with you right now, you might want to try the camera feature to help you see through some objects.

In this article, we’ll be looking at everything about the secret camera feature of OnePlus 8 Pro.

According to some videos, posted on Twitter by Ben Geskin a couple of days ago, the OnePlus 8 Pro camera’s ‘color filter’ feature can see through the plastic objects and clothes – more like an x-ray vision. Geskin was able to apply the OnePlus 8 Pro photochromic filter to change the view of the objects into surreal landscapes.

In one of the videos, Geskin looked at Oculus Quest controllers using the OnePlus 8 Pro color filter camera. In a similar way, he also looked at the Apple TV to show how the hidden feature works.

Apart from that, the popular Twitter influencer, Ice universe posted something similar on Twitter. Only that the user made use of the color filter camera feature on a smart speaker and wine bottle. Here’s what Ice universe tweeted: 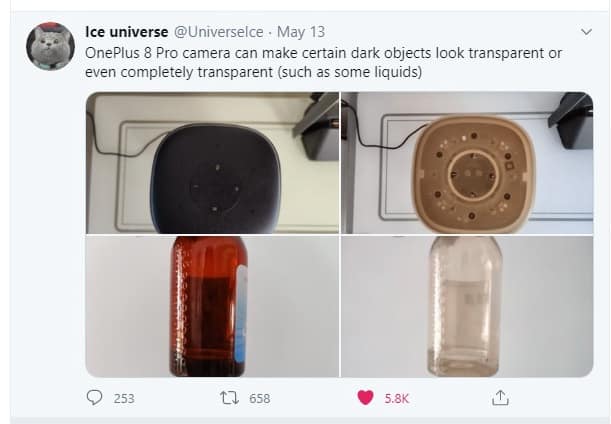 Max Weinbach was also able to use the OnePlus 8 Pro camera feature on a number of objects. Have a look at them here:

With the images posted by Weinbach, it looks like we can use the camera filter feature to see circuitry inside different devices, including a VR headset.

Although a lot of objects have been tested, these are the few we’re able to come up with. You might as well experiment and check how the feature works with any of the plastic objects and gadgets you find around you.

It’s Not An X-ray Filter

Although the OnePlus 8 Pro camera filter functions to help users see-through plastic, it’s not an x-ray vision. The reason for the effect is because a camera sensor of the smartphone is highly sensitive to infrared light. According to a photo expert, Stefan Mollenhoff: “The reason for this IR filter over the sensor is that infrared rays would interfere with the final result and affect the image quality.”

Of course, the OnePlus 8 Pro camera feature is similar to an x-ray vision. But it only works on a few devices as tested so far. It doesn’t work on the human body.