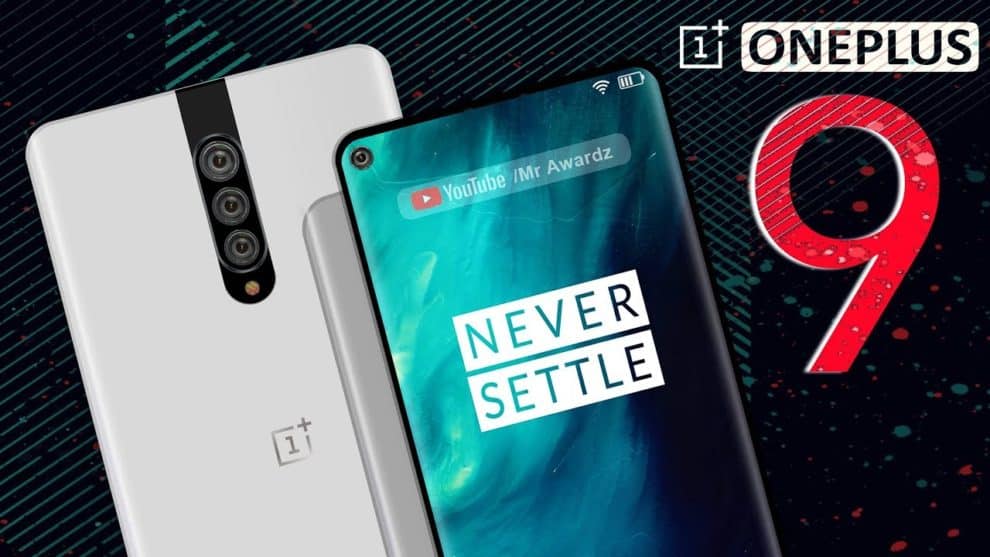 Gone are the days when OnePlus used to be a no-name brand, offering high-performance devices at a low price. From the OnePlus 1 to OnePlus 7, the OEM came with better specs at a very low price compared to its other competitors. Now the devices are getting on popular retailers’ stores and making big sales across the world. Looking at the newly released OnePlus 8 series, we can see that a lot of things have changed about the brand. It no longer sells at a cheaper rate like before. So, what should we be expecting for OnePlus 9?

In this article, I’ll be showing you everything you need to know about OnePlus 9 – including its release date, rumors, and specs. But before we go into that, let’s have a quick look at some features of the recently launched OnePlus 8 and OnePlus 8 Pro devices.

OnePlus 8 Series: Is The Hype Worth It?

The OnePlus 8 and the OnePlus 8 Pro are the latest released devices of the brand. They come with a lot of interesting features, including the 6.7-inch Fluid AMOLED screen, making the devices much bigger than the OnePlus 7 Pro. However, the fact that the devices also come with a 120Hz refresh rate makes them earn a lot of hype from their users.

Apart from that, it also comes with a Qualcomm Snapdragon 865 chipset, combined with the X55 5G modem, and runs on Android 10. That means, both the devices can support the 5G network to deliver faster browsing and other benefits. Also, the Pro version has a battery life of 4510mAH, supporting up to 30W fast charging. Furthermore, the OnePlus 8 Pro device also comes with the 8GB / 12GB LPDDR5, which is much better than most of its competitors’. It comes with a quad set-up rear camera of 48MP+8MP+48M+5MP and a front camera of 16MP. With all of these features, what should we be expecting for OnePlus 9?

The device is still a long time away, but some concept creators have already started imagining what it could look like. Recently, YouTube channel Multi Tech Media shared a OnePlus 9 Pro concept that looks exciting.

The concept phone features a fully bezel-less display curved on the sides. It has a hole-punch to house the selfie camera. The OnePlus 9 Pro concept gets a 6.9-inch Fluid AMOLED display with an impressive 240Hz refresh rate. The newly launched OnePlus 8 series offers a 120Hz refresh rate. It supports 5G technology and features an under-display fingerprint sensor for authentication and security.

It features a 24MP front camera with 1080p video recording capabilities at 60fps. On the back panel, it gets a circular five-camera setup consisting of a 108MP wide-angle lens, a 24MP telephoto lens with 10x optical zoom, two 16MP lenses, and an 8MP lens. The camera setup also includes a 3D Time of Flight sensor for augmented reality.

Another OnePlus 9 Pro concept shared by Twitter tipster Ben Geskin imagines a gorgeous device with an ‘invisible’ rear camera setup. It also sports a truly bezel-less display and an electrochromic glass. If you remember, the Chinese company showed off the electrochromic glass with its OnePlus Concept One. It automatically hides the camera lens when not in use. 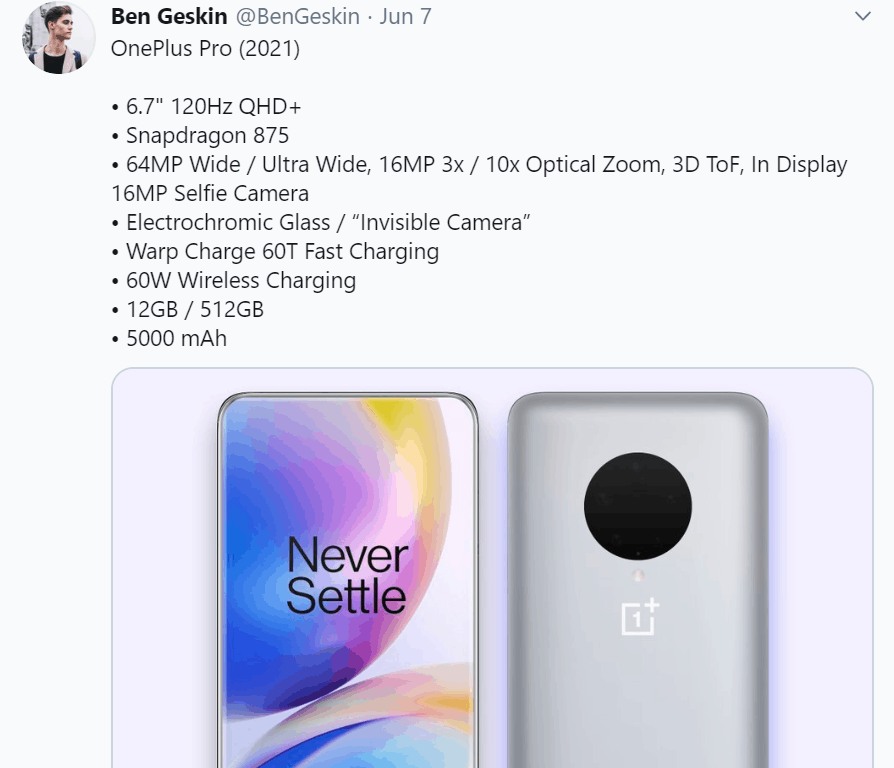 Geskin’s concept phone boasts a giant 5,000mAh battery with 60W wireless charging and 60T Warp Charge fast charging technology. It gets a 6.7-inch AMOLED display with Quad HD+ resolution and 120Hz refresh rate. Powering the concept phone is Qualcomm’s next-gen Snapdragon 875, which will be ridiculously expensive. The phone packs 12GB RAM and 512GB of internal storage. It also has a 16MP under-display front camera for selfies.

OnePlus 9: What we think it will have

Competitive pricing: OnePlus has a positive attribute that its phones are not heavily priced. For a price increase with advanced hardware and added features, it should still not be overpriced.

Better cameras: OnePlus devices including the OnePlus 8 suffer from camera issues which is a major drawback. We want to experience close-to-life photos, so we’d expect a camera system that functions closer to the iPhone 12 and Pixel 5.

Ideal battery life: The OnePlus 8T comes with a battery life of up to 9 hours and 40 minutes. Ideally, the best phone battery life is 11 hours or more. So we hope OnePlus can make some improvements to bring phones with longer battery life.

It’s understandable that it’s quite early to start talking about OnePlus 9 because the OnePlus 8 series just got released. The OnePlus 9 should not only fix the shortcomings of OnePlus 8 series but also bring massive upgrades in almost every aspect to keep up with the competition. Let’s have a quick look at some of the features that should come with it.

Although there’s no official word yet about the price of the OnePlus 9, we can still make some guesses judging by the previous releases. OnePlus 8 started at $699, while the starting price for the OnePlus 8T increased to $749. The OnePlus 8 Pro had an initial price of $899 for 128GB and $999 for 256GB.

In that case, we should expect the OnePlus 9 starting price to be around $750. Depending on RAM and storage, it could go all the way up to $950. The Pro version will likely start at $850 for the base model and up to $1100 for the highest storage variant.

OnePlus 9 with Hasselblad camera is set to release March 23