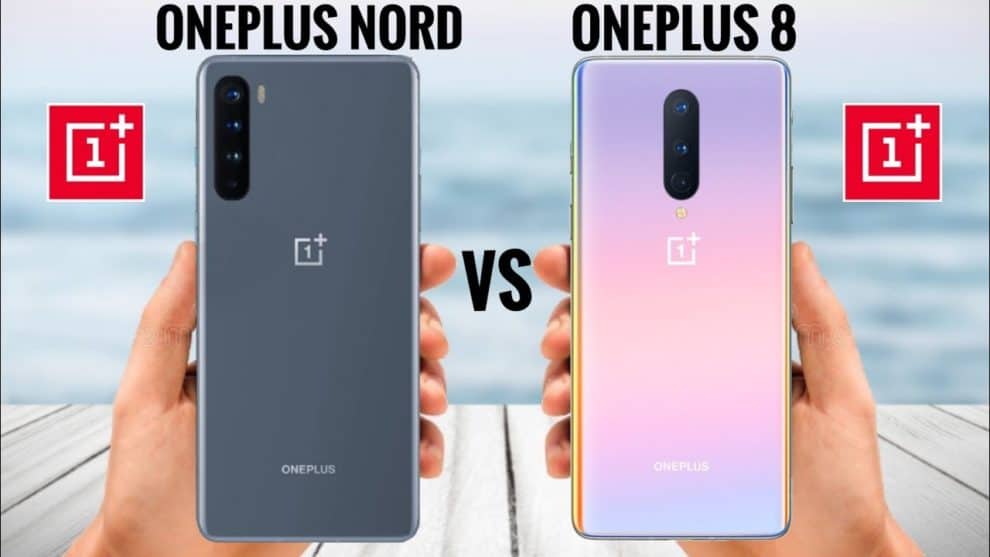 Chinese smartphone giant OnePlus has officially announced the much-awaited affordable phone OnePlus Nord. It is drawing comparisons to the OnePlus 8, which has been around since April. Though the Nord has an affordable price tag, it has a lot of similarities with the OnePlus 8, which arrived in April this year. They have a similar camera and design. In this OnePlus Nord vs OnePlus 8 comparison, let’s check out how the two phones stack up.

The Nord has a camera housing in the top left corner. OnePlus has used a flat display to cut costs, instead of a curved one. The OnePlus 8 has a curved display with a more premium feel. The upcoming phone gets an in-display fingerprint reader, similar to OnePlus 8.

Both phones have Corning’s Gorilla Glass 5 on the front and back to protect the glass. Both of them lack the traditional headphone jack.

OnePlus has confirmed that the Nord would feature a mid-range Qualcomm Snapdragon 765G processor, which supports 5G connectivity. It will be available two different RAM and storage options – one with 8GB RAM and 128GB storage and another with 12GB RAM and 256GB storage. Powering the Nord is a 4115mAh battery with 30W Warp Charge technology.

By comparison, the OnePlus 8 features an insanely fast Snapdragon 865 processor, which comes with Qualcomm’s X55 modem to support 5G. It has 8GB or 12GB of RAM, and 128GB or 256GB of built-in storage. The OnePlus 8 boasts a larger 4300mAh battery with 30W fast charging support. Neither OnePlus 8 nor OnePlus Nord supports wireless charging or reverse charging.

Neither device supports an expandable storage. So, you would want to buy the higher storage option of whichever phone you opt for. Both devices run OnePlus’s custom OxygenOS software on top of Android 10. The Chinese company provides at least two years of software updates and three years of security patches to its phones, and the same rule applies to both the Nord and OnePlus 8.

The Chinese company has confirmed that the Nord would feature a quad-camera setup on the back. It consists of a 48MP main lens, an 8MP ultra-wide-angle lens, a 2MP macro lens, and a 5MP depth sensor. The main lens supports optical image stabilization. The main lens is the same Sony IMX586 sensor as the OnePlus 8.

The Nord gets dual selfie cameras on the front. The selfie camera setup includes a 32-megapixel main sensor and an 8MP wide-angle shooter in a punch-hole design.

On the other hand, the OnePlus 8 features a triple camera setup on the back. It includes a 48MP main sensor, a 16MP ultra-wide angle lens, and a 2MP macro lens. There is no depth sensor. For selfies, it gets a 16MP punch-hole camera.

The OnePlus Nord has an “affordable” price tag. The OnePlus 8 starts at $699 for the 8GB RAM variant with 128GB storage. If you want the 12GB + 256GB model of OnePlus 8, you will have to shell out $799. The OnePlus flagship phones used to have an affordable price tag, but they have become ridiculously expensive now. So, the company is launching Nord to appeal to the price-conscious buyers.

OnePlus is preparing to launch the Nord across Europe, India, and other regions on August 4th. The company will be selling some units a few days earlier on July 31st t the John Lewis pop-up. There are reports that OnePlus will also make it available in the US and Canada to a small number of customers as part of a beta program, but the number of such customers won’t be more than 50. 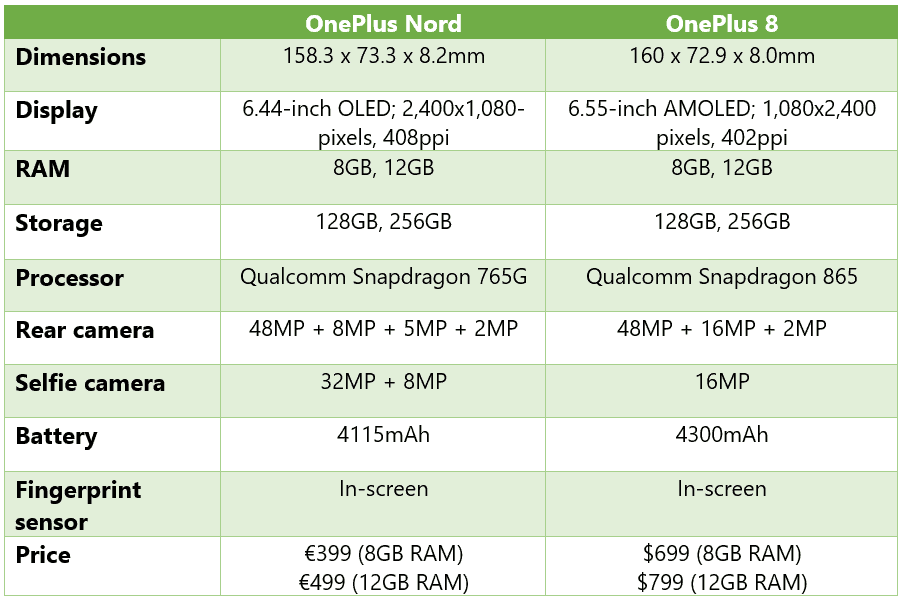