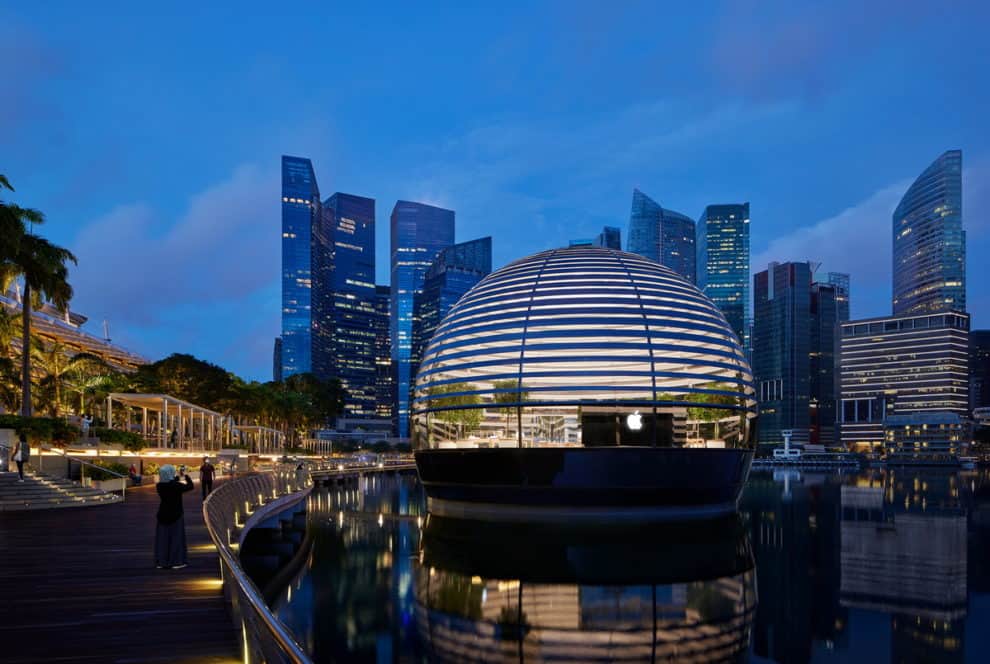 A few weeks ago, we reported in one of our posts, how Apple’s new store was compared to a floating lantern. The store, which comes with a unique spherical design, sits on the water of Singapore’s Marina Bay. Although we were able to share an image of the exterior design of the floating store at that time, we couldn’t share any image of its interior design. That’s because there was no information regarding how the inside of the new Apple’s floating store looks like, at that time. However, we’re glad to break it that you can now take a look inside the floating store, called Apple Marina Bay Sands.

All thanks to the Cupertino-based company, you can now take a look inside the floating store, Apple Marina Bay Sands. In case you don’t know, the new store is located in one of the luxury districts of Singapore. As for the location, it has several shops, restaurants, a casino, and the Marina Bay Sands hotel. New images, showing the interior design of the company’s third store in Singapore, was shared yesterday via its Newsroom.

As far as the interior design is concerned, it is spherical and comes with a fully self-supported, all-glass dome structure. The design comes with 114 pieces of glass, connected together by 10 narrow vertical mullions. To break it down, “mullions” is an architectural term that describes supporting bars between panes of glass.

Here’s a brief of Apple’s description of its new floating store, Marina Bay Sand below:

“The sphere is a first-of-its-kind, all-glass dome structure that is fully self-supported, comprised of 114 pieces of glass with only 10 narrow vertical mullions for structural connection.”

Furthermore, there’s an oculus at the top of the dome, inspired by the Pantheon in Rome. The purpose of that is to provide a ray of light. There’s also a lower level underneath the surface of the bay and dome. Inside there, there is an underwater Boardroom, where “entrepreneurs and developers who have an interest in receiving training and advice can meet with Apple team members, ” according to Apple.

Also, the interior wall of the glass has custom baffles. Interestingly, each of them comes with a unique design, which serves as a shade to prevent sun rays. According to Apple, the baffles are there to “provide nighttime lighting effects.”

When Is The Store Opening In Singapore?

During a press statement, Apple’s senior vice president of Retail + People, Deirdre O’Brien said, the company is more than happy to finally open its new store. Here’s a brief of what O’Brien said below:

“We couldn’t be more excited to open the breathtaking Apple Marina Bay Sands in Singapore, building on our commitment to this special place that began more than 40 years ago.

“Our passionate and talented team is ready to welcome this community to our new store. They’ll deliver the care and support that our customers around the world love.”

Furthermore, a total of 148 people make up the team at Apple Marina Bay Sands. Collectively, they speak more than 23 different languages, according to the company. As for the opening date of the floating store, it’ll start receiving people on Thursday, September 10 at 10 a.m. SGT.