Snapchat, initially released in September 2011 by Snap Inc., is one of the most popular messaging and social media apps. Many people prefer the app because it offers a lot of amazing features. These include instant messaging, video streaming, performance tracking, creative library, and campaign dashboard. However, according to the latest report, it seems everything is not okay with the app. Many of the Snapchat users have now taken to various social media platforms, reporting that their account has been locked out. For now, it’s still unsure what the exact cause of the issue is. However, you can check below for the likely cause and fix for the issue.

Snapchat Accounts Are Getting Locked Out

According to several reports across various social media platforms, including Twitter, some Snapchat users are unable to access their accounts, as they’ve been locked out. Here are some of the complaints below:

According to @NattabiCharlot2, the Twitter/Snapchat user complained that her account was locked out. Here’s what she tweeted, directing her complaint to @snapchatsupport:

“Hey please, my Snapchat account has been locked please I need to get it back.”

Similarly, according to @PratibhaSood2, she also complained that her Snapchat account is down. Here’s what the user said regarding the issue below:

Also, according to @NavMLG, the Snapchat user said he always gets locked out from his account every time he adds 3 people. 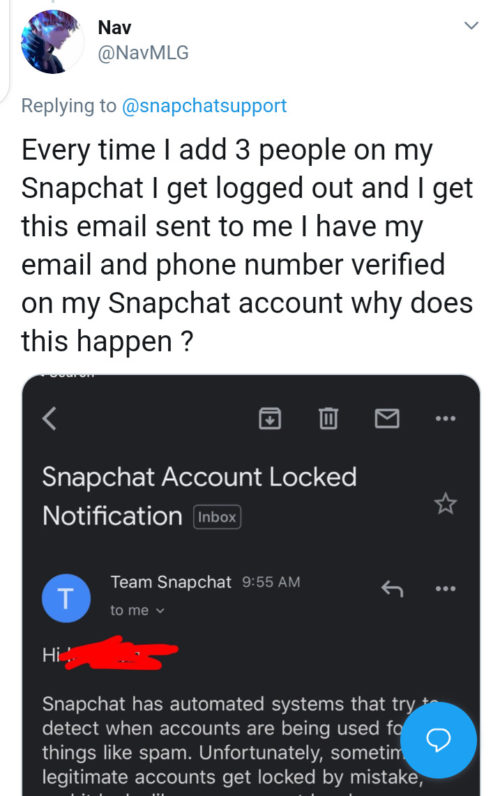 “Every time I add 3 people on my Snapchat I get logged out and I get this email sent to me I have my email and phone number verified on my Snapchat account why does this happen?” 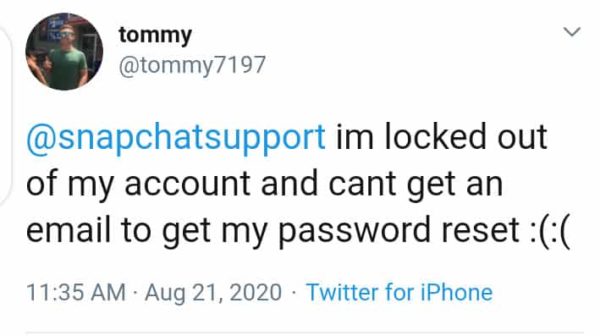 Cause and Fix for issue

For now, it’s still unsure whether the issue is as a result of glitches from Snapchat or some other reasons. However, according to a response from @snapchatsupport, a few factors can contribute to why a Snapchat account is locked out.

Here are some of the factors that could cause a Snapchat account to get locked out:

First, Snapchat users might be locked out of their accounts if they’ve been sending spam. For instance, a user is said to be spamming, if he/she sends several snaps and stories in quick succession, without any indication that the recipient is interested in receiving it. If something like that happens, such users might have to wait for several hours before trying to log in back, according to Snapchat.

Also, Snapchat accounts might also get locked out if a user adds too many people before getting the account verified. The only way to get the account working is by verifying it, either by email or phone number. To verify via any of the two options, all you need to do is to follow the steps below:

Lastly, a Snapchat account can lock for security risk. In that case, you can only get the account working by contacting the Snapchat Support Team.