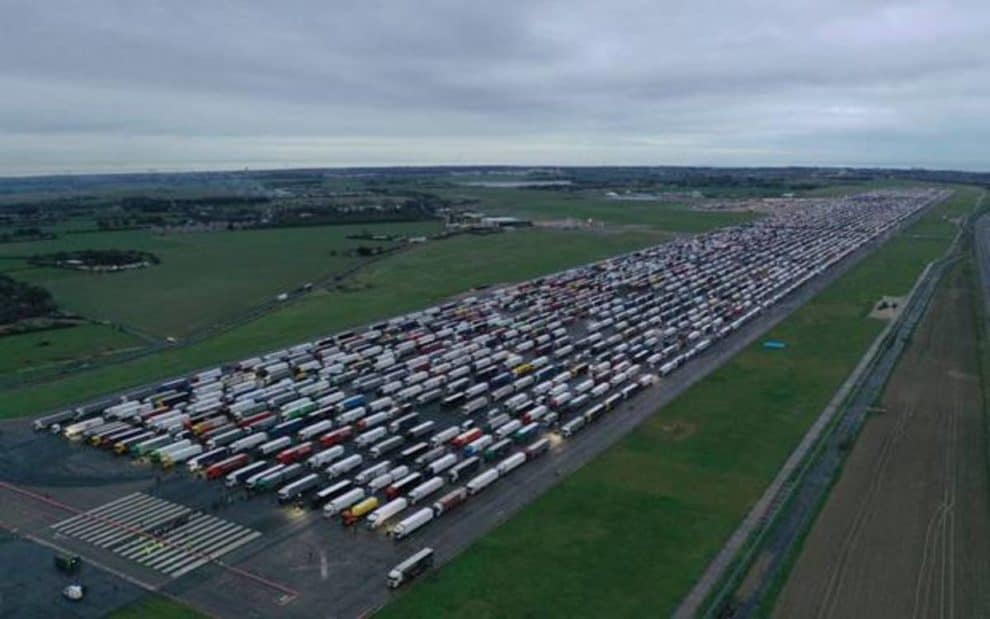 Boris Johnson’s announcement last Saturday of a new strain of Covid-19 being found in South-East England has been enough for a swathe of countries to close their borders to arrivals from the UK – forty, to be precise. Emmanuel Macron’s decision to close its borders abruptly for 48 hours has caused pandemonium at the Dover-Calais crossing, with as many as 1500 lorries stranded. There have already been warnings of UK food shortages as a result, with leading supermarket Sainsbury’s stating that they could face scarcities of certain fruits and vegetables. This in turn, has led to similar scenes of panic buying across the country which we saw earlier this year.

A No Deal Brexit has not yet been announced, but already Britain is experiencing disruption on its borders.

The situation is particularly dire for the Scottish seafood industry. Lorries carrying shellfish to Spain, where seafood platters remain a favourite dish on 24th December, are stranded, meaning £5 million a day of fish could be lost. If a protocol is not put in place for reinstating the flow of goods to the continent, the Scottish seafood industry could face significant losses. This will inevitably lead to companies folding, with potentially thousands of job losses. For many of these seafood businesses, Christmas exports were their last lifeline after the coronavirus pandemic which saw the restaurant and service industry hit hard and seafood orders dramatically reduced as a result. Seafood is Scotland’s second largest food and drink export and so this latest development is a further blow to the Scottish economy, already struggling after the tourism and hospitality sectors were effectively closed down due to Covid-19.

Indeed the emergence of a new strain of Covid-19 in the South-East of England – the B117 variant – will have political implications. Already during the pandemic we have seen a rise in support of Scottish independence, as Scots have rated Nicola Sturgeon’s handling of the crisis higher than Boris Johnson’s. But as it becomes clear that infections are not being effectively controlled down south, and that the virus is being spread by travellers from England, there is likely to be increased appreciation in Scotland of the benefits of national sovereignty. Not for the first time during the pandemic, Sturgeon has ruled the border with England should be closed, and this has not only practical but symbolic implications for the future of the United Kingdom. Especially given the current issue of Scottish goods being stranded at the Dover crossing, it must be on people’s minds, how things could have been different if Scotland had been independent.

After Boris Johnson’s announcement regarding a new strain of Covid and a rise of cases in England, Nicola Sturgeon didn’t hesitate to act. Indeed she hinted that she regretted how slowly the UK had acted during the initial stages of the pandemic earlier this spring, and that if she had her time over again, she would do things differently. Clearly, back in March, Sturgeon was taking her lead from Westminster, and acted in accordance with Johnson’s measures and recommendations. But now, given the experience of the pandemic, Sturgeon has taken a much firmer approach in light of a rise of cases. Families may only now get together on Christmas Day, schools will only return to study on the 18th January, and it is expected that a full lockdown will be announced from 26th December. In addition, cross-border travel between England and Scotland is to be prohibited, with more British Transport Police deployed to enforce it.

Sturgeon supporters will be angered by Boris Johnson’s failure to heed her request for No Deal Brexit port disruption plans to be activated now, given the chaos at the Dover crossing. She also called on Johnson to extend the Brexit deal talks as a result of the current escalation in the coronavirus pandemic, arguing: ‘The new Covid strain – and the various implications of it – means we face a profoundly serious situation, and it demands our 100% attention.  It would be unconscionable to compound it with Brexit.’ This plea has fallen on deaf ears however, with Home Secretary Priti Patel confirming yesterday morning that Brexit talks would not be extended further.

Boris Johnson, however, remains characteristically, defiantly optimistic, stating that trading on WTO terms would be entirely satisfactory’. The rest of Britain remains unconvinced, as we enter 2021 with trepidation for what lies ahead…

Contributed by Johanna Ross, a journalist based in Edinburgh, Scotland